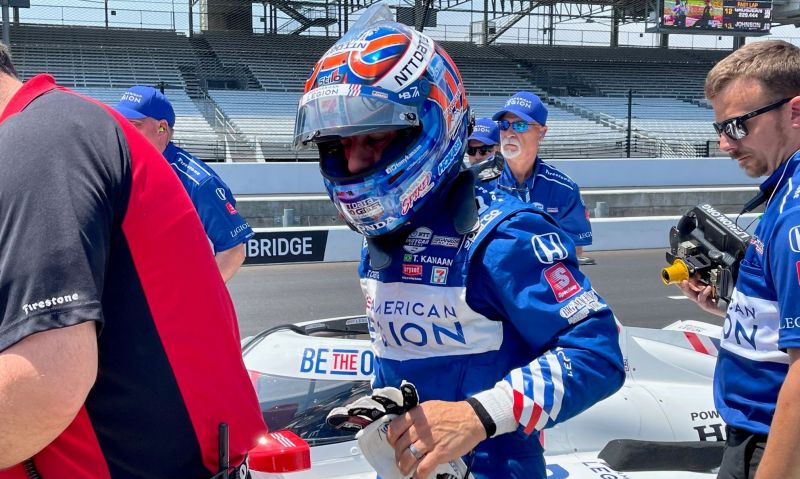 One of the underlying principles many members of The American Legion exhibit is the ability to excel over adverse conditions. It’s something that was impressed upon them through military service.

The American Legion’s INDYCAR SERIES team displayed that ability to excel over adverse conditions in “Fast Friday” for the 106th Indianapolis 500.

With very hot and very windy conditions, it made it extremely difficult for the 33 drivers to run on the edge around the 2.5-mile Indianapolis Motor Speedway oval.

But Tony Kanaan drove his No. 1 American Legion Honda for Chip Ganassi Racing to the fastest four-lap average late in Friday’s practice session.

The reason the four-lap average is so important is each driver has to make a 10-mile, four-lap run to qualify for the Indianapolis 500 starting lineup.

Qualifications begin today and have been moved up to 11 a.m. Eastern Time because of the threat of rain. The Fast 12 will be determined by the 12 drivers posting the fastest four-lap averages in Saturday’s qualifications.

On the fastest four-lap average, it was Kanaan, the 2013 Indianapolis 500 winner and 2004 IndyCar Series champion, on top with a four-lap average of 230.517 miles per hour in the No. 1 American Legion Honda for Chip Ganassi Racing.

“I’ve seen days like this, but I’ve chose not to drive on days like this, but today we had no option, so that was tricky,” Kanaan said. “Chris Simmons (CGR Director of Performance who is filling in as Kanaan’s engineer while Andy Brown recovers from illness) had to twist my arm to do more runs than I planned to do, but it was worth it. We helped the team. We found a couple of things that we were trying to achieve for Saturday.

“The goal for Saturday is to be in the top 12. We’re in the top seven on speed and fastest on four-lap average, so we’re good.”

Earlier in practice, Johnson smacked into the Turn 2 wall with his rear tire but kept the car under control. It had to be repaired in the Chip Ganassi Racing garage but returned later in the day to run the impressive qualification simulation.

“I just crossed the line a little bit,” Johnson said of his brush with the wall. “The guys did a great job of walking me through things and gave me a better feel of the tools I have in the race car. I was too cautious with my settings and had too much understeer on the car and I’m learning if you have too much understeer in the car, it takes the whole car over the track.

“We were all thinking there would be a tailwind and that was my first run. We had too much understeer in Turn 1 and that is what got me in the wall. It was nice to get back on the horse, run some fast laps and get a chance to run in qualifications for Saturday.”

When asked if he were ready for his first Indy 500 qualification effort, Johnson said, “I don’t have a choice. I have to be ready for it on Saturday. At least we’ll get 30 minutes of practice in the morning, so that will help me get a feel for the car and the conditions on Saturday.

“It was a four-lap thrill ride. The first attempt at four laps was quite nerve-racking. I didn’t know what to anticipate with the power and wind. I was much more in control on the second attempt. We wanted to get back out, let me get a feel for it again and end it on a high note. We were able to do that.”

Two-time Indianapolis 500 winning driver Takuma Sato was the fastest driver for the third day in a row with a fast lap at 232.789 miles per hour in the No. 51 Dale Coyne Racing with RWR Honda. Alexander Rossi, the winner of the 100th Indianapolis 500 in 2016, was the second fastest at 231.883 mph in the No. 27 Honda for Andretti Autosport.