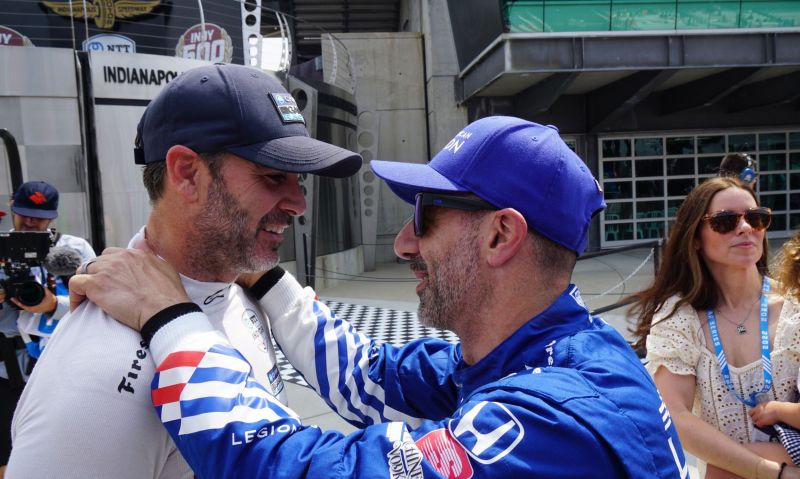 Kanaan and Johnson drive for Chip Ganassi Racing. All five drivers from that team are in the “Fast 12.”

Both Kanaan and Johnson were very impressive in their four-lap runs on Saturday. Kanaan’s four-lap average in the No. 1 American Legion Honda was 232.625 miles per hour – fifth fastest on Saturday.

“It was a good lap,” Kanaan said. “We were a little conservative after Friday’s mayhem. The goal is to put all five cars in the Top 12 today, so it doesn’t really matter where you qualify as long as you are inside there. I’ve got all my kids with me and it’s one less opportunity they can see their father driver at the Indianapolis 500.

“I don’t want to get sentimental, but it’s cool for them to grow up and see what I do. It’s really cool.”

Johnson, the seven-time NASCAR Cup Series champion who is making his Indianapolis 500 debut, was sixth-fastest with a four-lap average of 232.398 mph in the No. 48 Carvana/American Legion Honda.

“This is really high in my career,” Johnson said. “I haven't had much time to think about it and place it, but I can definitely say I'm enjoying it more. Instead of being so focused on just the work side, I'm enjoying the different moments. I'm letting my mind relax a little bit, look around and smell the roses type moments, which was not how I operated my NASCAR Cup career.

“I was pretty focused and didn't take time to savor the experience and the moment. I feel like I'm doing a really good job of that, and today exceeded expectations. Not only performance on being track, but the fan support, the energy on pit lane, and everything that I experienced today was really more than I expected. I know it's nothing like what we're going to see on Sunday here next weekend. So just savoring every moment that I can.”

“Not to just state the obvious, but it's pretty awesome,” Johnson said. “Just so thankful to be a part of the group. Watching them prepare literally since they left here last year and continually thinking of this race and it being a motto to win here before the championship.

“It's even written in the race shop. The first goal is to win the Indianapolis 500 and then the championship. To be a part of it, to live it, to now be here experiencing it is really cool.”

Rinus VeeKay, 21, had the fastest four-lap average he ran of 233.655 miles per hour in the No. 21 BitNile BitCoin Chevrolet in Saturday’s qualifications. It was the third fastest speed in Indianapolis 500 history.

The last time a four-lap average was run at that speed was four years before VeeKay was even born.

Also, positions 13-33 have been locked into the starting lineup for the May 29 Indianapolis 500.

The Fast 12 is set for today at 4 p.m. Eastern and will be televised on NBC.