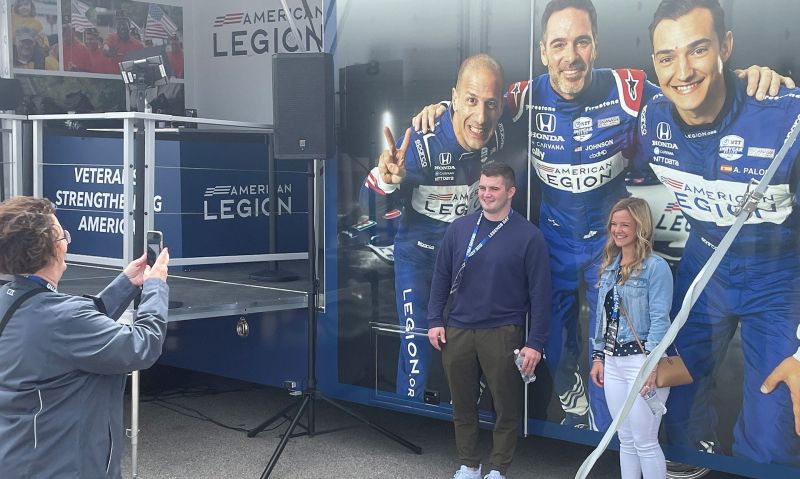 Sunday was a busy day for Avon Post 145 Second Vice Commander Judy Pearson. That morning, she was there to witness several young men and women take their oath of enlistment at the Indianapolis Motor Speedway, handing out American Legion backpacks and other items to the newest members of the U.S. Armed Forces.

Pearson, who also served as Indiana’s Sixth District executive vice commander, then headed to the IMS midway, where she worked The American Legion’s INDYCAR activation display. As an official charity of INDYCAR, The American Legion has been able to stage the display from race to race, allowing Legionnaires to interact with prospective members, sign up new members and renew current or former ones, and learn more about the organization and its mission.

“I think this has been a great experience, between last weekend and today,” said Pearson, who also worked the display during the GMR Grand Prix at IMS. “We’ve been able to visit with different veterans and their families, and we were able to watch the inductee of the new enlistees today. That was a great experience. And just being able to interact with all the veterans from different eras … from all over, that’s been great as well.”

The American Legion display features photos of Chip Ganassi Racing drivers Jimmie Johnson, Tony Kanaan and Alex Palou, a “Wall of Honor” and a disk drop game for visitors of all ages an opportunity to win a prize.

Brady Brooks, a member of Speedway Post 500 – located right across Georgetown Road from IMS – was manning the game as long lines formed to play. He said manning the display “has been fun and rewarding. They did a terrific job of putting this (display) together and making it available not only here at Indy, but at the other races as well.

“We’re getting a lot of potential Legion members – and not just veterans, but Auxiliary members and Sons of The American Legion. It’s done really well.”

Since 1946, Post 500 has been providing parking for the Indy 500. But the relationship is much deeper than that, so seeing the Legion team up with INDYCAR is even more special for Brooks.

“It’s really amazing,” he said. “We’ve had (military-sponsored) drivers before, but to finally have a Legion car, it goes out not only for our post, but for veterans all over the world. There’s a lot of retired guys that live out of the country, and they’re seeing the Legion car … and it’s pretty cool.”

American Legion Past National Vice Commander Doug Haggan, an Indiana resident and member of Rhein Main Post 5 in Germany, also has spent the past two weekends at IMS volunteering at the display. He doesn’t hold back when voicing his support for the Legion’s partnership with Chip Ganassi Racing.

“I think it’s the best thing that The American Legion could ever have done,” Haggan said. “They’ve been in this town as long as the Indianapolis 500 has been here. I think it’s long overdue.”

Haggan said a handful of visitors to the display either joined or renewed their Legion membership. But he sees a much wider reach that’s being provided by the organization’s involved in INDYCAR. “I think it’s ten-fold what we’re getting back,” he said. “The media exposure. We’re getting our word out there. There’s nothing better than that. We’re getting that advertisement, whether it’s on the cars or elsewhere.”

Pearson, who served in the U.S. Army, said seeing The American Legion car being driven by Tony Kanaan – as well as American Legion branding on Jimmie Johnson’s No. 48 car and the Legion livery on a few of Alex Palou’s races this season – “gives me chills, just like when I see the American flag being flown in certain areas and the national anthem being sung. It’s just nice to see that The American Legion is getting their brand out there. It’s a great organization for us to take care of our veterans and their families, and a lot of people don’t know about it.”