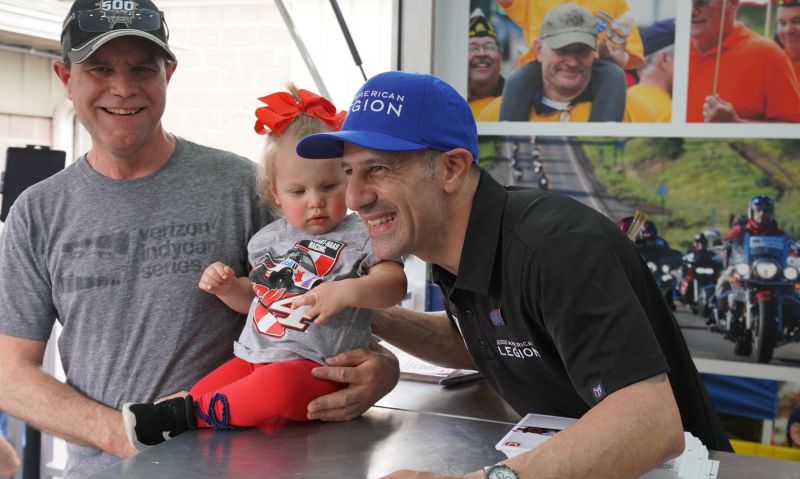 For 43 years, the American Legion past national commander has driven up from the southern part of the state with his wife Vickie to spend the month of May living out of their RV parked at American Legion Post 500 in Speedway, Ind.

For years it was to watch two weekends of qualifications, followed by the Indy 500. But recently, it’s been to be there for both the GMR Grand Prix on the Indianapolis Motor Speedway (IMS) road course and then to take in qualifying and the Indy 500 to close out the month.

So when The American Legion entered into the INDYCAR Series through its partnership with Chip Ganassi Racing, Koutz was a little more than excited.

“I think it’s probably one the best things we’ve ever done,” said Koutz, one of dozens of people at Kenneth N. Dowden Wayne Post 64 Wednesday night, where INDYCAR driver Tony Kanaan paid a visit with the Legion’s INDYCAR display. “Our name’s getting out there. I’ve been over in the garage area (at IMS) the past two weeks. I go around all the Chip Ganassi teams, and just watching all the people around there … and you can see the crowd here. It’s getting The American Legion name out there.”

Kanaan, who will drive the No. 1 American Legion Honda featuring The American Legion’s Be The One campaign slogan in this weekend’s Indianapolis 500, signed autographs and visited with fans at Post 64.

“You talk about what the Legion means for this country and what veterans mean to this country,” Kanaan said. “And driving a car that has basically the American flag on Memorial Day Weekend and for the cause, which is Be the One.’

Kanaan said getting a chance to meet so many veterans through the Ganassi-Legion relationship has “been so cool. Talking to the veterans. Hearing the stories. It’s really humbling. I love it.”

The Legion’s display has traveled throughout the state during May, making stops at American Legion posts. Department of Indiana Commander Mark Gullion said he went to his first Indy 500 at age 14 to sell newspapers and “has been going pretty much every year in one fashion or the other.”

Gullion said having the display visit different posts “has been good for public relations, even if it’s just for post members. Now they have a better understanding (of the racing program) and knowing what it’s for, knowing that it’s to help suicide prevention. I think it’s been a great deal.”

Seeing the Legion join INDYCAR has been a win-win for Gullion, a lifetime Hoosier.

“I don’t know if words can describe it. It’s unbelievable,” he said. “The Indianapolis 500 is a worldwide event … and the exposure The American Legion is getting this year, especially with name drivers, what else could you ask for? I think it will help educate the public on The American Legion and about suicide awareness.”

Post 64 Commander Glen Hawkins said hosting the display and getting the word out about the Be the One campaign “is something that needs to be done, and we’re just happy to be able to do it. We try to do as much as we can for our veterans and for the community, and this is a way to do that.”