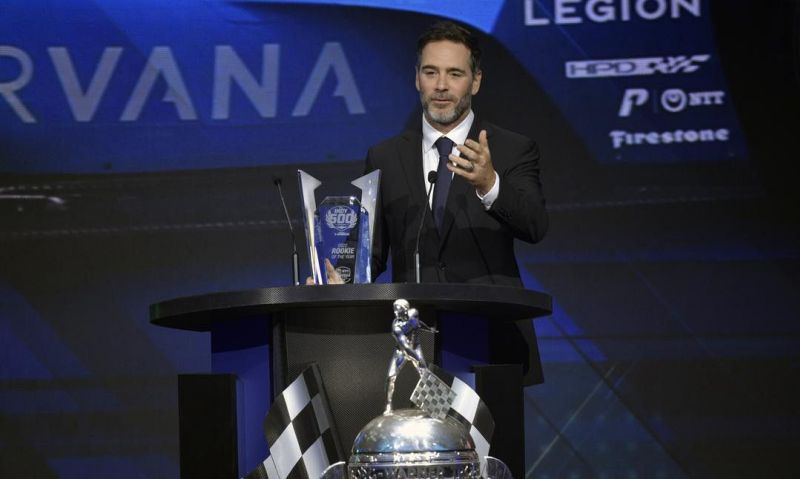 Jimmie Johnson of The American Legion capped off his rookie “Month of May” at the Indianapolis Motor Speedway with the 2022 Indianapolis 500 Rookie of the Year Award.

Johnson was presented with the honor during Monday night’s Indianapolis 500 Victory Celebration at the JW Marriott Hotel in downtown Indianapolis.

Despite a disappointing 28th-place finish, Johnson’s award takes into consideration the entire month at the Indianapolis 500, not just Race Day.

The criteria for the award is based on the following:

“The Indianapolis 500 Rookie of the Year Award should be presented to the driver who has performed with the most distinction among first-year drivers in the Indianapolis 500. Criteria includes on-track performance in practice, qualifying and the race, media and fan interaction, sportsmanship, and positive influence on the Indy 500.”

Malukas was the highest-finishing rookie driver in 16th place, but Johnson’s entire month saw him put the No. 48 Carvana/American Legion Honda for Chip Ganassi Racing among the top speed drivers nearly every day of practice. He advanced into the second day of qualifications when he made the “Fast 12.”

He was also fast on Carb Day, but unfortunately on Race Day, he was unable to advance from his 12th starting position. He lost four spots on the opening lap and said the car was not handling well for the conditions of the day.

Johnson actually led a lap in the race with 12 laps to go, but that was before his final pit stop. After that stop, he was cycled back in the field before he was lost control of the car and crashed into the Turn 2 wall with six laps to go in the race.

He finished 28th but was one of the stars of the month and because of that, earned the honor of Indianapolis 500 Rookie of the Year for 2022.

“It’s based upon practice, qualifying and race performance as well as fan and media interaction, as well as elevating the sport of INDYCAR and the Indianapolis 500,” Indianapolis Motor Speedway President Doug Boles said. “Certainly, you have helped us elevate the sport and brought along a lot of folks that may not have paid attention to INDYCAR as you have made the transition from NASCAR to the NTT INDYCAR SERIES and this year to the Indianapolis 500.

“Although you weren’t the highest finishing rookie, the votes came in and Jimmie Johnson you are the 2022 Indianapolis 500 Rookie of the Year.”

Johnson was surprised by the honor because of his finish in the race.

“What an honor,” Johnson said. “I didn’t really prepare an acceptance speech because I didn’t think I would be getting this award.

“I want to thank Carvana and The American Legion for their support. To be 46 and leaving with the Rookie of the Year Trophy is quite humbling, but I’ll take it.”

Johnson had many great memories through the month, and Race Day exceeded his expectations.

“The racer in me wishes I had a more competitive day and wished I hadn’t crashed at the end and brought out the red flag and put (Indy 500 winner Marcus Ericsson) through all of that,” Johnson said. “I’m letting in as much as I can, but I will forever have these memories of how special it is to be on that grid, be part of the opening ceremonies, turning down Turn 4 and seeing that tunnel of all the fans, it’s a sea of people with all the color, then the next time you come through there you are going 230 miles per hour.

“It’s the biggest rush of all time.”

In many ways, competing in the Indianapolis 500 was the culmination of a lifelong dream as a boy watching the race on television with his grandfather and father back in El Cajon, California.

“It was such a special opportunity,” he said. “I’m thankful to drive for Chip Ganassi Racing. I had an amazing couple of weeks here and it exceeded all expectations.

“It really was the most amazing event I’ve been a part of. For me, it really is the ultimate in racing.”