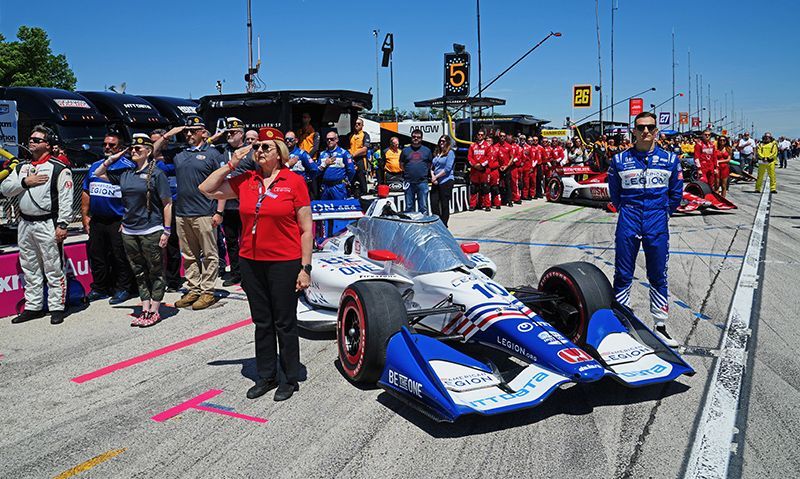 American Legion Past National Commander Denise Rohan salutes during the national anthem while on the Road America track with Alex Palou and the No. 10 American Legion Honda. (Bruce Martin photo)

For Alex Palou, who was carrying The American Legion paint scheme on his No. 10 Honda for Chip Ganassi Racing, he was attempting to pick up his second-straight win at Road America, this time from the third starting position.

For Jimmie Johnson, driver of the No. 48 Carvana/American Legion Honda for Chip Ganassi Racing, he was confident that his race car could tackle the challenging 4.014-mile 14-turn Road America course and finish 10-15 positions better than his 26th-place starting position.

Unfortunately, Johnson’s race was over just a few moments after it began. He was shouldered off the race course by another driver, presumably AJ Foyt Racing’s Tatiana Calderon, and his No 48 was stuck in the Turn 3 gravel pit. By the time safety crews were able to refire his race car, it was already one lap down.

From that point on, he ran competitive lap times compared to the field, but without any chance to get back on the lead lap, Johnson was doomed with a low finish.

After starting 26th, he finished 24th. Had he stayed on the lead lap, who knows what the finish would have been?

“I’m just frustrated,” Johnson said. “You spend all weekend getting ready for everything and then you make it two turns and end up in the sand trap.

“I had more pace than where I finished. I was racing with Graham Rahal for a long time and was able to pass him. I raced with Rinus VeeKay, guys that I have never raced with before, so my performance improved today, even though I was a lap down.

“I feel good about it, and this year there are moments in each race that I can pull out and be proud of, but I’m frustrated with not getting the results in practice and qualifying that I’m capable of. In qualifying, it’s more my fault, doing stuff wrong. In the races, we’ve been extremely unlucky and today was another example of that.”

Johnson believes his lap times are one full second ahead of where he was at this point last year.

“All the data is supporting it; the field is stronger than it was last year, and it is harder to finish in the teens,” he said. “If I could have some luck and finish on the lead lap, I think a good finish is possible.”

As for Palou, he collided with teammate Marcus Ericsson, the winner of the 106th Indianapolis 500 on May 29, on Lap 3 and that left Palou’s No. 10 American Legion Honda buried in the Turn 5 gravel pit.

“It’s a single-seat and if you have a hard hit like that, it will break,” said Palou, whose car was able to be repaired and return to the track. He finished last in the 27-car field, 19 laps down.

For Johnson, Palou, and the rest of The American Legion team, INDYCAR has a two-weekend break before resuming with the Honda Indy 500 at Mid-Ohio on July 3. The team will take part in an INDYCAR Open Test at Iowa Speedway on June 20.