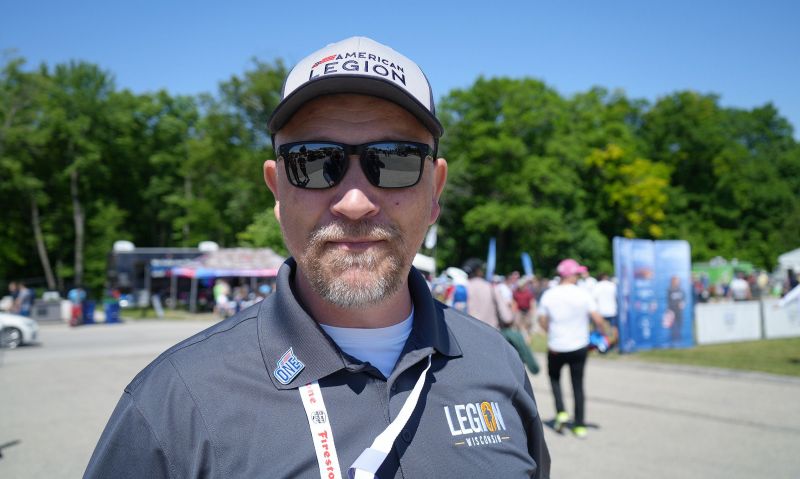 When The American Legion INDYCAR program began in 2021, the Department of Wisconsin was one of the first to fully embrace the effort.

Legion members from around the state came to Road America to support the new program that has brought awareness and attention to the Legion’s causes, especially veteran suicide prevention.

The Department of Wisconsin was back at the June 12 Sonsio Grand Prix at Road America, but this time they had the beautiful new activation unit that travels to each INDYCAR event in the United States. The activation unit makes it easier for veterans and active military servicemen to join the Legion.

It is also a great spot for Legion members in the area and throughout the state to visit with each other and share some important fellowship.

Chet Faith is from Post 115 in Elroy, Wis., in Juneau County. He is the Department of Wisconsin Membership Director and has seen the activation unit become a key gathering area.

“Overall, it’s creating a lot of interest,” Faith said June 12. “A lot of veterans are coming by seeing that The American Legion supports our veterans, but we also have big names like Jimmie Johnson, Alex Palou and Tony Kanaan that are driving these Chip Ganassi Racing cars for us at Indianapolis, and it’s a whole different demographic for our veterans.

“The INDYCAR SERIES in general, a younger group of veterans are really interested in this high-octane sport. It’s helping boost our numbers and getting our name out there and letting the public know that The American Legion is out here supporting our veterans.”

“This year, for a $48 donation, they can get a chance to win Jimmie Johnson’s helmet that he wore in the Indianapolis 500.”

Faith said over 200 Legion members from around Wisconsin came by the activation unit. There were also 30 members of the Department of Wisconsin helping throughout the race weekend assisting Faith in his membership drive.

Faith spent 20 years in active duty on a submarine. He believes the Legion played a key role in helping him adjust to becoming a civilian.

“No one really joins the military wanting to be a loner,” Faith said. “You get in and it’s a new family. When you spend all of your years of service, you create a new family, but when you get out in the civilian world, that comradery goes away a little bit. But by joining organizations like The American Legion, you can get back into that comradery, that family feeling, you have been used to over the years, or the people that understand what we are talking about in our terminology.

“They love seeing the activation area here and to be welcomed like we have by INDYCAR and Road America.”

Faith said there are American Legion posts in Wisconsin that have watch parties for the INDYCAR races.

Faith had a memorable weekend, getting a chance to meet Jimmie Johnson, Alex Palou, and team owner Chip Ganassi.

“They are true supporters of ‘Be The One,’ our program to help prevent veteran suicide. Both of those drivers are behind it, engaged in it and supportive,” Faith said. “They truly believe in this cause.

“Every department has their own little take on preventing veteran suicide, but this draws all of our efforts into one program to help unify our efforts.”

Faith also enjoyed his up-close look at an Indy car in the Chip Ganassi Racing paddock.

“I’ve gone from navigating submarines to looking into these cars,” Faith said. “The steering wheel alone, makes my head explode. Top Gun cockpits have nothing on these Indy cars.”