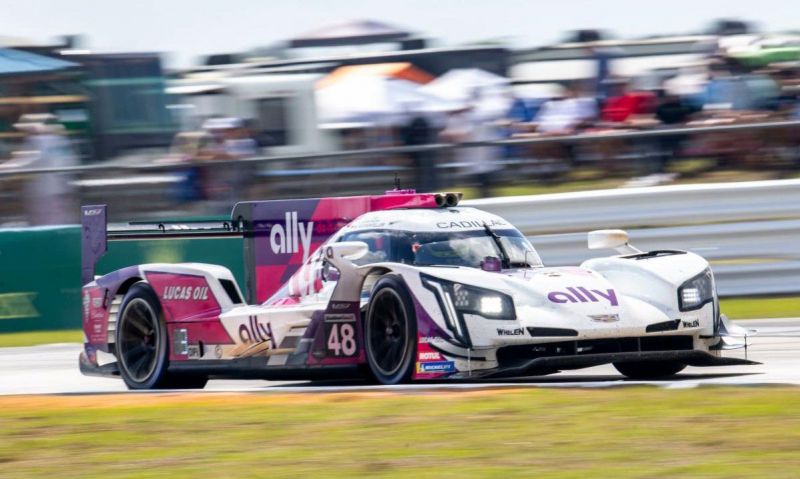 It’s officially summer and that means many American Legion members and other citizens are hitting the road for either summer vacation or a long weekend.

Most of the drivers in INDYCAR are enjoying a rare weekend off. But Johnson is hitting the road to compete in the No. 48 Ally Cadillac in the Sahlen’s Six Hours of The Glen IMSA Sports Car contest for Action Express.

The trio are set to do battle in the Sahlen’s Six Hours of The Glen at Watkins Glen International in New York, June 23-26.

The Ally teammates are only competing in the series’ four endurance races this season: Daytona, Sebring, Watkins Glen and Road Atlanta. They finished fifth at Daytona and sixth at Sebring. The No. 48 Ally Cadillac DPi-V.R has proven it can be fast as it finished third in the Rolex 24 qualifying race.

Johnson is quite familiar with the famed Watkins Glen International from his 20-year-career in NASCAR. Instead of running the NASCAR “short course” Johnson will get to race on the full 3.4-mile, 11-turn road course, which includes the famed “Boot” portion of WGI.

“I’m happy to be back in the racecar and happy to be back with Action Express Racing,” Johnson said. “I’m really excited to see Kamui and Mike, who are great human beings and great guys to be around. I’m excited to be back at Watkins Glen, a track and an area I really do enjoy spending time in.

“To be on the track, to run the full loop down through the boot, I have not done that many times in all of the trips I’ve been there. So, I’m excited to run the full distance track. In one of these DPi Cadillacs, the pace and the effort you can drive around that racetrack is quite impressive – especially comparing it to my days in NASCAR. Some of the braking zones, the bus stop in the back and the carousel, it’s just mind blowing how fast these cars can travel through those tight little areas. I’m very excited to get back and have that experience once again.

“It would be incredible to win at Watkins Glen, incredible to win in another division and series. The way sportscar racing and endurance racing works is the team atmosphere. I really feel like I’m part of the family at Action Express Racing. To win as a race team, and as a family, in a sense, would be really special too.”

Johnson’s teammate, the always exciting Kobayashi, will be competing at Watkins Glen for the second time in his career.

Although it’s been a few years since Rockenfeller last raced at The Glen (2006), he is looking forward to getting back behind the wheel of the No. 48 Cadillac.

“It’s nice to be back in the car and back in IMSA,” Rockenfeller said. “It’s a great track (Watkins Glen). It's been a long time since I’ve raced there. I’m looking forward to being back and looking forward to having some sim preparation. Hopefully, we're ready for a good race weekend. What it takes (to win), I think, is to have a race without issues. That’s the main target. Speed is always crucial, but you also need to run trouble-free. If we don't have any incidents, I think we have a chance.”

Johnson was among 19 drivers that tested in an Indy car at the .875-mile Iowa Speedway on Monday, June 20. Team Penske’s Josef Newgarden was the fastest driver in that test session, lapping the short oval in 18.377 seconds. Johnson was 13th fastest with a fast time of just 19.042 seconds.

He was faster than defending champion and teammate Alex Palou, 2016 NTT INDYCAR SERIES champion and 2019 Indianapolis 500 winner Simon Pagenaud among others.