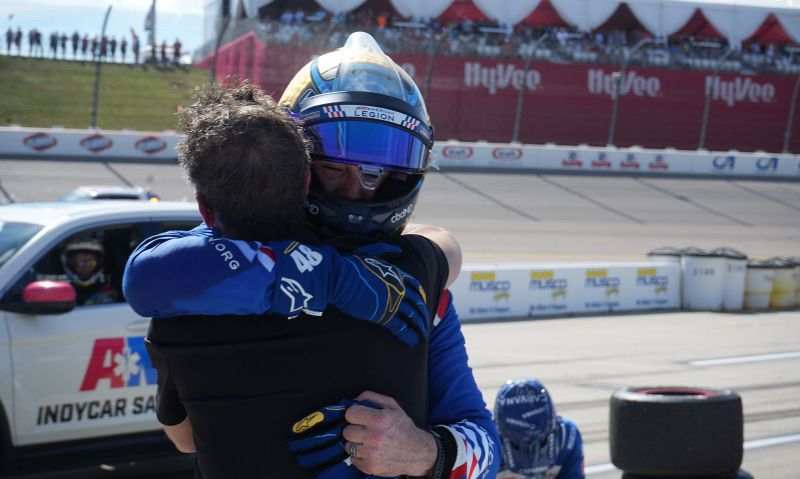 It was only fitting that on a day when Jimmie Johnson scored his first career top-five finish in the NTT INDYCAR SERIES, that he did it in The American Legion Honda.

Johnson and The American Legion have formed a strong bond and partnership through the “Be The One” campaign to help prevent veteran suicide.

After leading 19 laps in Saturday’s Hy-Veedeals.com 250 at Iowa Speedway before finishing 11th, Johnson achieved one of his goals in INDYCAR by driving to his first top-five finish in Sunday’s Hy-Vee Salute to Farmers 300.

The American Legion had full sponsorship on Johnson’s No. 48 Honda on Sunday.

“With my family history in the armed forces and serving our country, the relationship with The American Legion has been very special,” Johnson said. “To have it on the car today, and the car looked so good, today is a very cool day and I’m happy we got it done.”

As Johnson was celebrating with his No. 48 Chip Ganassi Racing crew, he was handed the iPhone by his publicist, Amy Stock. It was Dean Kessel, chief marketing officer for The American Legion, who helped broker the deal with the seven-time NASCAR Cup Series champion and Chip Ganassi Racing after the 2020 NTT INDYCAR SERIES.

“Great job man, fantastic,” Kessel told him. “I’m so happy for you, man. You were so good, so great. It’s awesome.”

Combined with primary sponsor Carvana, Johnson and The American Legion have gone on quite a ride in INDYCAR the past two seasons, and on Sunday, they had a tangible result worth celebrating.

“I’m so proud to have The American Legion on the car today in the race and get my career best finish with them and their Be the One campaign that is going on,” Johnson said. “And I really have to thank Carvana in taking the step with me.

“A couple of years ago, Ernie Garcia Jr., believed in this idea. We knew we could run well. It took getting on the ovals to have my best finish and we were able to do it today.

“Today was just a fun, race day out there.”

It was also a chance to share the celebration with the team, who have helped Johnson improve every step of the way in his INDYCAR career that began on the street and road courses in 2021 and now includes a full season, including the ovals.

“It was a great weekend,” said Blair Julian, Johnson’s race strategist at Chip Ganassi Racing. “We got a couple things ticked off the box here. We got a top-five for Jimmie and the team. The team is working great. Eric Cowdin is doing a great job engineering. Mike Le Gallic is running the crew guys, and it is a great group here.

“We think Jimmie’s result today will carry over to the road courses left on the schedule, as well as another opportunity on the short oval at (World Wide Technology Raceway) in St. Louis. We didn’t see the result at Toronto, but the ground he made up in Toronto was massive.”

When Johnson drove into his pit area after the Hy-Vee Salute to Farmers 300, he triumphantly climbed out of his car and pumped his fist in the air, to his crew. Scott Pruett, who has served as his driver coach, was one of the first to greet him and the two took a selfie together.

Johnson was interviewed by NBC’s Nate Ryan for the second day in a row, basking in the attention of the best weekend of his INDYCAR career.

“This is a really special day for me, for everybody that has been on this journey for me in the INDYCAR Series,” Johnson said. “On Saturday, I felt like I caught some people off guard and was able to pass more cars.

“Today, although I finished better, I had to work so much harder for every position on the track.”

A top-five was a goal, but the next goal is a win.

“The ovals, my chances continue to increase,” Johnson said. “I was sixth at Texas, fifth here. Indy was an outlier because I struggled to pass on that track, but we have one more oval left at Gateway and that is a short track.

“Over this weekend, I was able to find lanes to pass.

“Damn, if my dream didn’t come true on an oval.”

Johnson has the confidence and is ready to ride that into the Indianapolis Motor Speedway for next Saturday’s Gallagher Grand Prix on the IMS road course.

“These cars reward confidence,” Johnson said. “That’s what I keep learning and discovering every week. I think I come to a new level of confidence and aggression, and I realize there is still more out there.