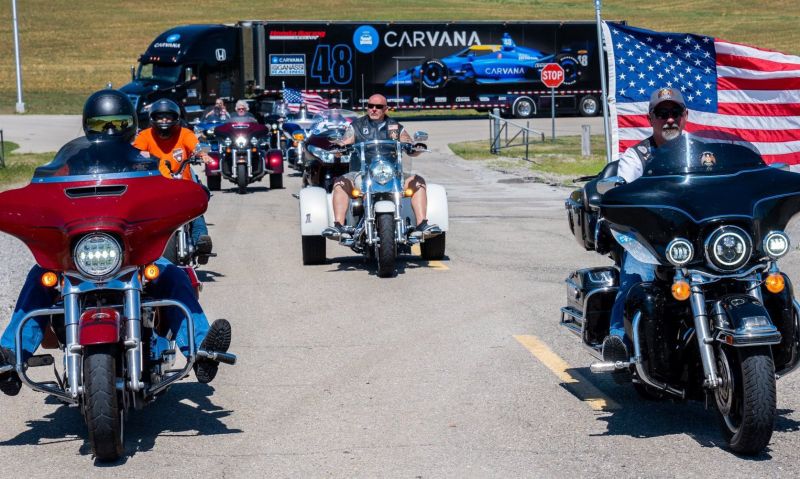 It was a good couple of days at the Iowa Speedway for The American Legion’s INDYCAR SERIES racing program. On Saturday in the Hy-Veedeals.com 250, Jimmie Johnson led 19 laps driving before finishing 11th driving the No. 48 Carvana/American Legion Honda. And then on Sunday in the Hy-Vee Salute to Farmers 300, Johnson had his best-ever performance in INDYCAR, staying at the top of the leaderboard on his way to a fifth-place finish – all while driving with the Legion’s “Be the One” livery on full display.

Both days, The American Legion’s activation display received a stream of traffic, including Johnson himself. But outside the track, things were pretty special for the Legion, too.

“We live for this,” Iowa American Legion Riders Chairman Cliff Barker said. “I couldn’t be more proud of the Iowa Riders if I tried. I am elated with the turnout we got and the support that we got. With the recognition that we got.”

Barker – a member of Ames American Legion Post 37, where he is the ALR chapter director, serves on the post’s executive board and also is a Sons of The American Legion member – said the idea for providing an escort for Ganassi was floated to him by Department Adjutant John Derner at a district meeting last spring. “I was like ‘sure,’” Barker said. “The answer’s always yes. We’ll figure out how in a minute.”

Logistics were worked out over time between the Department of Iowa and INDYCAR SERIES officials; at first, the escort was going to be just from the track’s holding area to inside the Iowa Speedway. Barker said he offered to do more and was able to reach out to the hauler drivers and arrange to meet the group in Williamsburg and escort them from there.

“That’s how I knew we would get the participation,” Barker said. “We love to do this. This is what we do.”

The rally pointy was determined, and Barker was even able to secure an Iowa State Police escort, despite the short notice. “The quote from the sergeant I was working with is, ‘We don’t do this on short notice, but we’re going to do it for The American Legion because we really appreciate what you do for us,’” Barker said. “In less than 12 hours I had a trooper in the parking lot to lead us down the highway.”

Barker said he didn’t think the escort could have gone any better. “You kind of sit at the head of the table for something like this and say, ‘Alright, I’m not sure how this is going to work, but I’ve got to make a plan,’” he said. “To have everything fall into place – I had 21 bikes show up with 28 (Legion Riders) – we all rallied at the Williamsburg exit. The hauler came in. We took them to the track. We got them to the marshalling area. And that’s when we found out that the Riders were leading not just the Chip Ganassi haulers, but all of the haulers. Jimmie Johnson’s hauler was the first one in, all the haulers followed him, and we led them in.

“Overall, it was a very good showing for the Riders. We had seven or eight different chapters come over. Some were local. One young guy rode all the way from Omaha to be part of this. You look around and say, ‘not only is this cool, but this is a perfect example of what we do.’”

On Twitter, Chip Ganassi Racing said the Riders’ effort was “Best escort ever into the infield of dreams at Iowa Speedway. Thank you to the American legion #LegionRiders.”

Barker said he and Department of Iowa Vice Commander Samuel Johnson went back to the Iowa Speedway Saturday morning to the pits. “We went down to get pictures, particularly The American Legion (branding),” Barker said. “And I’ll tell you, it’s everywhere.

“We were able to talk to Palou’s crew. They were all in American Legion shirts. And they were so accommodating. We didn’t have unlimited access. We’re a couple of yahoos … that wanted to go down and see where we were and what we were doing as the Legion. And they were so willing to talk and take pictures.”

Barker watched both races on TV – and loved the exposure The American Legion’s “Be the One” program was able to receive from Johnson’s car on Sunday. “The amount of in-car coverage Jimmie got was amazing,” he said. “I love the ‘Be the One’ program. And I know it’s something that I and the Riders, we’re going to eat, sleep and breathe this. This fits right into our wheelhouse.”

And Department of Iowa Commander Randy L. Johnson took to his own Facebook page to share photos of the escort and then his thoughts on what the weekend meant to The American Legion.

“Whether we understand it or not, Iowa Speedway, the great State of Iowa and our American Legion of Iowa was on the national stage this weekend. Literally,” he wrote. “Our American Legion brand was everywhere and everybody in attendance or those that watched the activities on national television saw it. We had celebrities and their spouses walk by our American Legion trailer and point and wave. We had American Legion National representation willing to stand in the heat and chat with anybody that walked up. Jimmie Johnson drove his American Legion sponsored #48 to a fifth place finish - but only after he made many many appearances around the speedway and our Legion trailer to promote The American Legion. Chip Ganassi Racing showed their appreciation to the Department of Iowa by hosting our entire Iowa Legion Family to their hospitality area with an extended visit from Jimmie Johnson again. This was truly the largest stage our entire Department of Iowa has ever been on.”

To watch video of the escort into the Iowa Speedway, click here and here.