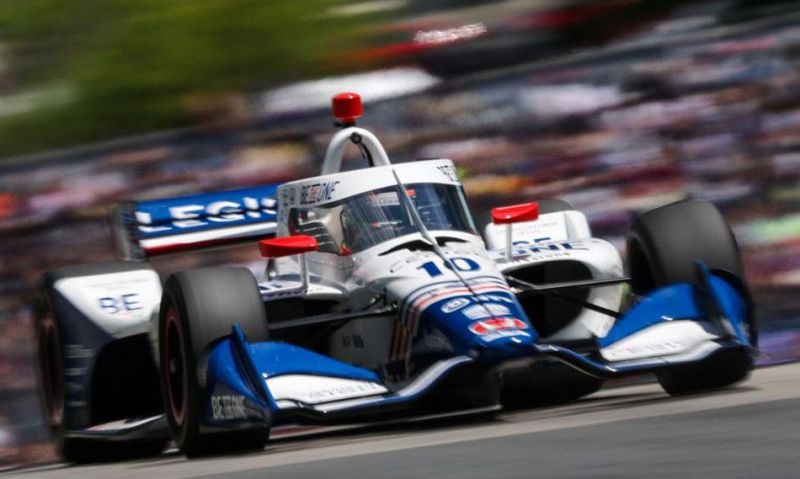 It’s Brickyard weekend at the Indianapolis Motor Speedway and for most of Jimmie Johnson’s 20-year NASCAR Cup Series career, the venue was site of some of his greatest success.

He was denied one last attempt at racing around the 2.5-mile oval in the No. 48 NASCAR Cup Series car in 2020 when Johnson tested positive for COVID the weekend of the race.

That was then, this is now.

Johnson is no longer in NASCAR. He switched to the NTT IndyCar Series in 2021 with Chip Ganassi Racing. Brickyard weekend is also no longer on the 2.5-mile oval.

The action has shifted to the 2.439-mile, 14-turn road course that incorporates part of the IMS oval along with a large portion of the infield.

Johnson is coming off a career-best fifth-place finish in Sunday’s Hy-Vee Salute to Farmers 300 at Iowa Speedway. The driver of the No. 48 Carvana/American Legion Honda is confident that success on a short oval will boost him in Saturday’s road course event at IMS, the Gallagher Grand Prix.

“These cars reward confidence,” Johnson said. “The thing I keep learning and discovering each and every week, I come to a new level of confidence and aggression and realize there is still more out there, so I can build on this.”

All three races this weekend, including the NASCAR Xfinity Series on Saturday afternoon and the Cup Series on Sunday afternoon, will be on the 2.439-mile road course.

“I’ve had more laps there than anywhere, so hopefully I can race in the top 15 on the road course there,” Johnson said. “That would be really nice.”

It may not be the oval where Johnson finds himself this weekend at Indianapolis Motor Speedway, but there is plenty of history and atmosphere on the road course.

A second INDYCAR road course race was added to the IMS schedule in 2020 to create the first INDYCAR/NASCAR “Tripleheader” – three races, one weekend at the same venue.

“I’m really looking forward to getting to Indianapolis and racing on the road course track, where I have the most experience and laps on,” Johnson said. “Coming off a great weekend in Iowa, I’m looking forward to building on that and hopefully having a career best on the road course this weekend. I’m also very excited to see my friends from NASCAR with the doubleheader. Race fans will have a great weekend with all these things coming their way.”

Johnson is the face and centerpiece of The American Legion’s “Be The One” campaign to ending veteran suicide, but Saturday’s race will feature Alex Palou in the No. 10 American Legion Honda.

“I’m so excited to get back to the Indianapolis Road Course,” Palou said. “Iowa didn’t work quite well for us, but we kept fighting and got the car back home in one piece. It’s time to push hard. This road course at the beginning of the year was good for us in terms of performance, so can’t wait to go there and show what we’ve got. We’re getting to the end of the season almost; it’s going to go by quick. It’s time to push hard and get that No. 10 American Legion in victory lane this weekend.”

Johnson, Palou, and the rest of the INDYCAR drivers hit the track Friday morning for first practice from 9:30 to 11 a.m. Eastern Time.

That is the only practice on Friday. From 1-2:15 p.m. ET is INDYCAR “Knockout” qualifying culminating in the Firestone Fast Six.

The Gallagher Grand Prix telecast begins at noon on NBC with the green flag set for 12:30 p.m. ET.

The Indianapolis Motor Speedway is just a few miles to the west of The American Legion National Headquarters. For any Legion members attending the race, be sure to get there early and stop by Speedway American Legion Post 500 this weekend and have breakfast.

Breakfast will be served to Legion members and other race fans from 7-11 a.m. both Saturday and Sunday for $12. Parking and camping are still available at American Legion Post 500, 1926 Georgetown Road in Speedway.