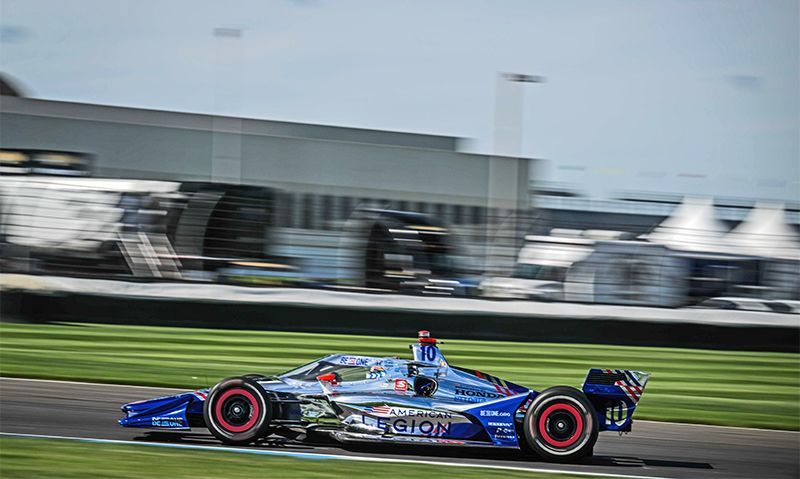 Jimmie Johnson went for a Saturday drive on the Indianapolis Motor Speedway road course in the Gallagher Grand Prix. He started 23rd and finished 22nd, going a long way but taking a long time to get there.

“Fun day here at Indy,” Johnson said. “Ultimately, our strategy hurt us the way the cautions fell today. It was really nice to be up front, led a lap, ran in the top-five for a portion of the race. Just didn’t have the right strategy for the finish.

“I’ll take the experience from this weekend, build on it, take it to Nashville next weekend for a street course. I’ll just continue to improve each week and have a lot of fun.”

Johnson was driving the No. 48 Carvana/American Legion Honda for Chip Ganassi Racing.

“We keep hoping for those breaks that really fall towards us, unfortunately the yellow flag flew during the cycles we were working, and it didn’t,” said Scott Pruett, Johnson’s driving coach at Chip Ganassi Racing. “It may not look it, but we are continuing to make headway.

“It was the nature of the way the race played out. Sometimes things fall your way and sometimes they don’t. This was a struggle for all of the Ganassi cars and that carries through to us as well.”

It was defending NTT IndyCar Series champion Alex Palou, who was driving a striking American Legion livery on his No. 10 Honda for Chip Ganassi Racing.

“This car looks awesome and it’s great to have The American Legion as our partner,” said Barry Wanser, Chip Ganassi Racing team manager. “When we saw it on flat paper, it looked good. But when we got it out here in the daylight, it really looked good.”

Palou started seventh and fell back to 10th at the finish, but it was enough for him to remain solidly in the championship for 2022.

Team Penske’s Will Power is the new Cup Series leader with 431 points. Palou is sixth with 379 points, 52 points out of the lead with four races remaining.

“We started seventh and that first stint we started on used Reds and the rear tires fell off sooner than we thought,” Wanser said. “Fortunately, when we pitted, the Honda gave us great fuel mileage and we were able to salvage the day and get to the end.

“There are four races left, and we’ll go to Nashville and do best our best there.”

Palou calls himself a “warrior” and is ready to take the battle to the streets of Nashville next weekend.

“We came home 10th and that is not what we wanted,” Palou said. “We will go to the last four races we have, try to get the points back and fight for the championship.

“It’s time to keep our heads down and push like we never did before. I expected today to be a good day for us and make some points. We had a bad second stint on the Reds and couldn’t really push it. It was a shame, but we’ll keep on pushing.”

At the start of the race two cars touched, and Palou had to go to the outside to avoid contact but was able to forge ahead.

“It was great to have that scheme for The American Legion,” Palou said. “It was a shame we couldn’t get the result they wanted, but we will keep fighting.

“The special chrome looked really good for the fans and on the track. I love representing The American Legion because I meet some people from the Legion before the race and tell them what to expect or what we want to happen in the race. I have also visited a few posts and that has been fun.

“It’s great to have that support from The American Legion.”

Palou vows he will continue to fight for the championship and will keep pushing until the end.

“We never give up,” Palou said. “We are going to make it happen.”