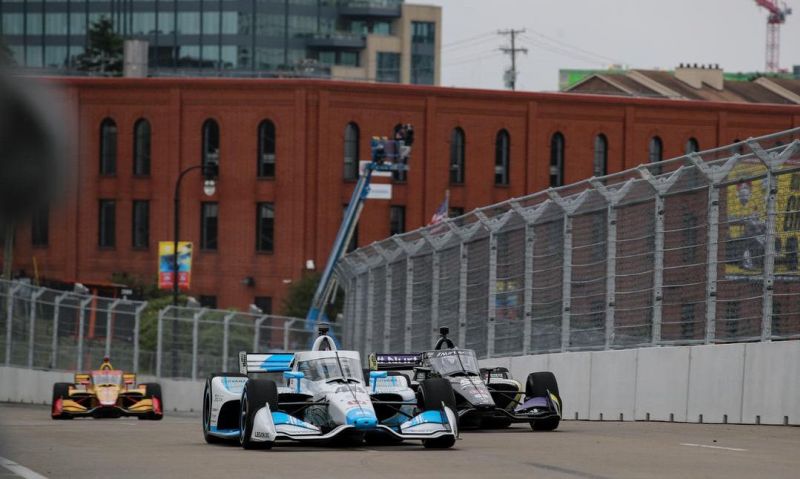 Jimmie Johnson of The American Legion INDYCAR team heads back to the streets of Nashville, vowing to make a dramatic improvement from last year’s Big Machine Music City Grand Prix.

In INDYCAR’s first trip to the streets of Nashville in 2021, Johnson and his team enjoyed a trip to Broadway in the entertainment district of this booming destination city.

After showing much improved pace compared to the rest of the field in both Friday’s and Saturday’s practice sessions, Johnson was confident of an improved qualification performance.

Instead, he crashed on cold tires on his out lap in qualifications and was unable to complete a lap. The next day as the 12-noon warmup session was concluding, his car snapped loose and hit the Turn 4 wall.

He started last year’s race in a backup car for teammate Alex Palou.

When the race started, Johnson did his best to avoid a multi-car pileup in Turn 11, which left the course blocked. INDYCAR officials issued the red flag, but Johnson’s crew made the mistake of attaching the air jacks to the car to assess any damage to Johnson’s machine. That’s against INDYCAR rules because no work can be completed on a car during a Red Flag.

INDYCAR parked Johnson’s car for the remainder of the race.

This year, Johnson promises to be racing on the track at the end of the race, instead of watching it from pit lane.

"Last year’s race was a lot of fun, there was a lot of energy in the city, and it was a wild race,” Johnson said. “It was certainly a weekend that was tough on me.

“I had a few incidents that I hope to learn from, apply those lessons and have a better race weekend coming up. I’m excited to be in an area that loves motorsports, and in downtown Nashville with all of the energy that it provides.”

The action actually kicks off Thursday night with a Pit Stop competition involving the pit crews and teams of INDYCAR.

“I’m looking forward to the pit stop competition Thursday afternoon, being on-track the rest of the weekend and seeing all of the great fans,” said Johnson.

Johnson will be the driving the No. 48 Carvana/American Legion Honda for Chip Ganassi Racing this weekend on the streets of Nashville. In last Saturday’s Gallagher Grand Prix at the Indianapolis Motor Speedway, Johnson stated 23rd in the 25-car starting field and finished 22nd, one lap down to race winner Alexander Rossi of Andretti Autosport.

Prior to that, Johnson scored the best finish of his NTT INDYCAR SERIES career, a fifth-place finish in the Hy-Vee Salute to Farmers 300 on the Iowa Speedway short oval.

Johnson has made terrific gains on competition on the street and road courses, but it may not be as obvious for race fans to see than it is for Johnson’s crewmembers.

“I'm understanding how these cars reward aggression, the confidence it takes to having yourself and the car that's going to stick,” Johnson explained. “The faster you go, the more downforce these cars create. It takes a lot of energy to turn these tires on and make them perform like they need to.

“I just think I've been on the soft side of this since I've ever sat in a car. The ovals feel more natural to me and I'm able to find my confidence, push the car, have the downforce and the tire work for me. But the street and road courses, I'm making gains. Unfortunately, they're not as obvious as what you can see on the ovals.

“But I continue to make gains.”

The Big Machine Music City Grand Prix is scheduled for 3 p.m. ET Sunday and will be broadcast on both NBC and Peacock. A complete weekend broadcast schedule can be found here.