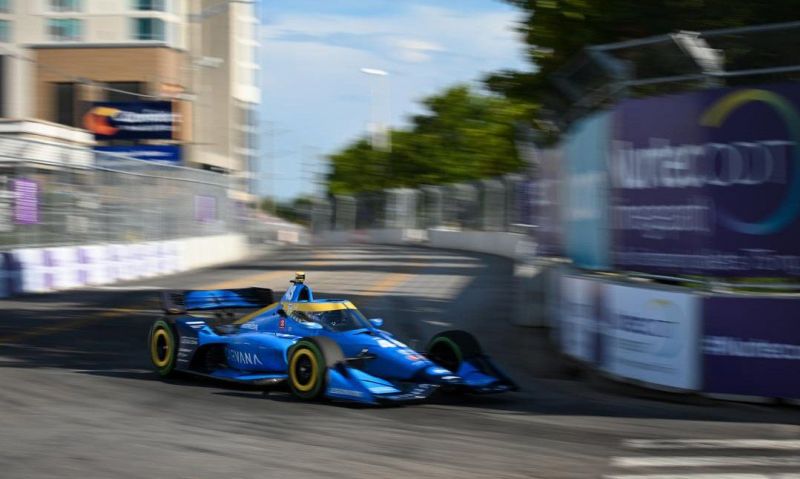 Jimmie Johnson was on his way to his best-ever result on an INDYCAR Street Course in Sunday’s Big Machine Music City Grand Prix.

He started 25th, pitted out of sequence, and was in second place on Lap 24, right behind his Chip Ganassi Racing teammate Alex Palou.

Johnson was able to get the No. 48 Carvana/American Legion Honda into that position by using a strategy where he pitted on Lap 9 along with Helio Castroneves.

Once in the top five, Johnson was able to duel with the biggest names in the NTT INDYCAR SERIES on a street course, something he has not been able to do often in his brief INDYCAR career.

On Lap 45 of the 80-lap race, Johnson made his final pit stop of the race and dropped to 16th, but immediately raced his way to 12th place with 10 laps to go.

But with just seven laps to go and Johnson in 13th place, a suspension issue caused by the bumpiness of the track sent Johnson’s car into the Turn 4 wall.

Instead of celebrating his first top-15 finish on an IndyCar Street Course, Johnson was out of the race and finished 18th.

It was still an improvement of seven positions from where he started, but this was a day where the seven-time NASCAR Cup Series champion was expecting much more.

“Unfortunately, didn’t make it to the end of the race today,” Johnson said. “I had some contact earlier in the race and had some left-front suspension damage. Although it was difficult to drive, we were setting up for a really good, strong finish. Something happened entering Turn 4 on the lap I crashed. I’m not sure why, but the car started bottoming really bad. Around I went and tore up the car.

“Unfortunately, I didn’t get to the finish line. Great effort by everyone, I’m just sad we didn’t make it to the distance.”

Blair Julian is Dixon’s race strategist at Chip Ganassi Racing and expressed his disappointment over what could have been a great moment for Johnson and the team.

“It’s a shame,” Julian said. “We were trying to get to the end there and have the best street course finish of his career there. I’m not sure what happened. Something got out of whack there over the bumps. I’m not sure if we had a mechanical issue or it got away from him. We had contact with Simona earlier in the race and it damaged the steering, but he was able to race hard.

“Realistically, we were playing with the options we had with our pace. We knew we weren’t going to drive up through the field. We took a bit of a gamble, and it was paying off with the best street course finish of his career, but it didn’t work out.”

Julian admitted this loss was a little more frustrating than previous races.

“Jimmie has skin in the game and his ass in the seat and risking it, also,” Julian said. “We appreciate how hard he is working to get the results.

“It’s frustrating, but that’s just the way it is.”