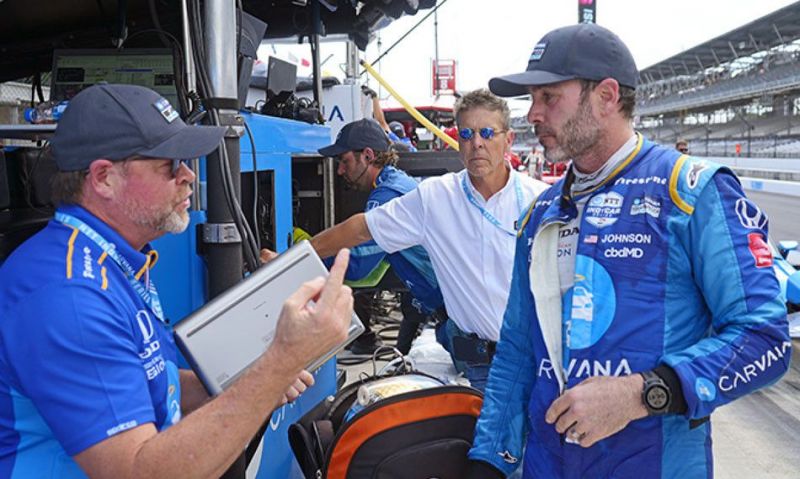 Eric Cowdin is Jimmie Johnson’s race engineer on the No. 48 Carvana/American Legion Honda at Chip Ganassi Racing. The two have formed a tremendous bond with each other during Johnson’s transition from seven-time NASCAR Cup Series champion to an aspiring NTT INDYCAR SERIES driver.

Cowdin has experienced a championship and an Indianapolis 500 victory with Tony Kanaan earlier in his career. In fact, it was Kanaan who teamed up Cowdin with Johnson when the two drivers were sharing the No. 48 Honda at CGR in 2021. That is when Johnson was competing on the street and road courses and Kanaan was the driver of the No. 48 on the ovals.

This year, however, Johnson is competing in the full season of INDYCAR, including the ovals. He has mastered the art of oval racing from his days as a NASCAR champion. The highest finish of Johnson’s INDYCAR career came at Iowa Speedway on July 24 when he finished fifth in the Hy-Vee Salute to Farmers 300.

Cowdin was among the first to congratulate him that day and predicted Johnson’s momentum would carry over to the street and road courses left on the 2022 schedule.

Johnson was on his way to his best-ever result on an INDYCAR Street Course. He started 25th, pitted out of sequence, and was in second place on Lap 24, right behind his Chip Ganassi Racing teammate Alex Palou.

Johnson was able to get the No. 48 Carvana/American Legion Honda into that position by using a strategy where he pitted on Lap 9 along with Helio Castroneves.

Once in the top five, Johnson was able to duel with the biggest names in the NTT INDYCAR SERIES on a street course, something he has not been able to do often in his brief IndyCar career.

On Lap 45 of the 80-lap race, Johnson made his final pit stop of the race and dropped to 16th, but immediately raced his way to 12th place with 10 laps to go.

But with just seven laps to go and Johnson in 13th place, a suspension issue caused by the bumpiness of the track sent Johnson’s car into the Turn 4 wall.

The mood in Johnson’s pit area turned from excitement that would have come with the driver’s first top-15 finish on a street course, to sudden shock and disappointment.

Crew members began to load up the pit equipment and head back to the team’s transporter. One by one, the crewmembers on the timing stand packed up their computers and climbed down the stand.

Cowdin remained, looking off into the distance, wondering what might have been if Johnson’s car had made it to the finish.

“He had some suspension damage early in the race and I’m not sdanure what happened, if something broke,” Cowdin said. “The area with the biggest bumps on the whole circuit over there are in that braking zone.

“It’s disappointing, for sure.”

Cowdin’s strategy was simple, and it worked.

“The strategy was to get off the alternate tires as soon as we could and get some track position as everyone cycled through the pits,” Cowdin explained. “When we pitted, we were trying to make it to the end from Lap 45.

“Being on the lead lap in that position and being able to pit and make it to the end, for once things seemed to work out in our favor.”

Once Johnson was in the top-five, he was racing against the big stars of INDYCAR who fight it out for victories every race.

“He got roughed up a little bit there, but he was holding his own,” Cowdin said. “A top-15 was a goal, but a top 12 would have been huge. It was all falling into place. The plan would have worked the way we planned it. It was unfortunate.”

Cowdin is a key member of Johnson’s crew that also includes race strategist Blair Julian, driver coach Scott Pruett, and crew chief Mike LeGallic. They have forged ahead through Johnson’s learning experience in his career switch from NASCAR to INDYCAR.

There are just three races left in the 2022 season, and this team believes it has created a foundation for future success.

“We have a lot left to accomplish,” Cowdin said. “Closing out the season, our main priority is to help the 48 get as far forward in the points while hopefully helping one of our teammates win the championship.

“It’s still all hands-on deck. We have our head down, pulling hard for these last three races, particularly when we get to (the  Bommarito Automotive Group 500). It was looking like a good day for the team. Luckily, we got two cars on the podium.”

Johnson’s teammate, Scott Dixon, scored the 53rd INDYCAR victory of his career, giving him second place on the all-time victory list. Another teammate, Alex Palou, finished third to give Chip Ganassi Racing two of the three positions on the podium.

Johnson’s next race is on an oval, the 1.25-mile World Wide Technology Raceway on August 20 in the Bommarito Automotive Group 500. Johnson, and his crew are hopeful his oval expertise will give The American Legion team another top finish.