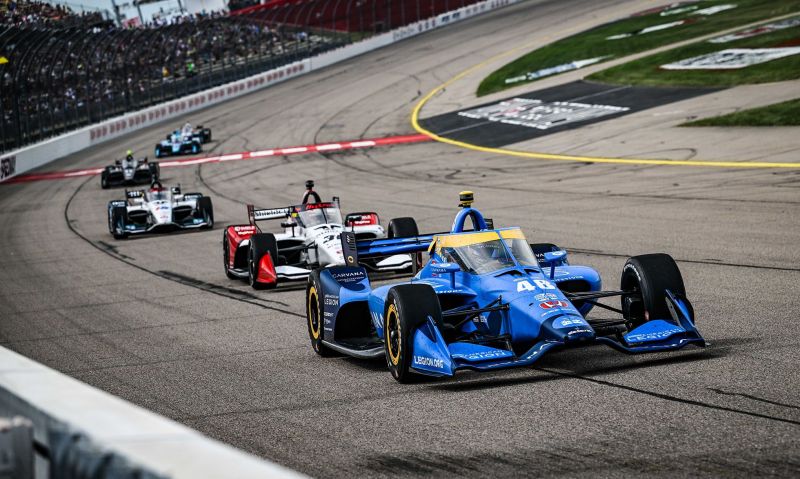 When Jimmie Johnson switched to the NTT INDYCAR SERIES after a historic career as a seven-time NASCAR Cup Series champion, the legendary driver was happy with a street and road course career.

After experiencing the safety that is part of the current Indy car, then seeing the 105th Indianapolis 500 as an analyst for NBC Sports in 2021, Johnson was hooked on racing in circles in an Indy car. He announced a full-season schedule for 2022.

All left turns seem to fit Johnson’s racing style. He finished a then-career high sixth in the XPEL 375 at the 1.54-mile Texas Motor Speedway on March 20. He was among the fastest drivers at the 2.5-mile Indianapolis Motor Speedway during practice and qualifications for the 106th Indianapolis 500.

Although he finished a disappointing 28th in the race after crashing late in the 500-mile race, Johnson gained confidence in his ability to better understand the car on ovals.

In the July 23-24 Hy-Vee INDYCAR Doubleheader at Iowa, Johnson led 19 laps before finishing 11th in the Hy-VeeDeals.com 250 on July 23 and followed with his best-ever INDYCAR finish the following day when he was fifth in the Hy-Vee Salute To Farmers 300.

As Johnson and the No. 48 Carvana/American Legion Honda team at Chip Ganassi Racing head to World Wide Technology Raceway for Saturday night’s Bommarito Automotive Group 500, Johnson has a request for INDYCAR.

“More ovals, please,” Johnson said. “I never thought I would say it, but I’m in favor of my short ovals. I think they put on such a great show. What I was able to see at Iowa in those two races, to my surprise, these cars really perform well on a short oval.”

Yes, it’s the same Johnson that thought street and road racing in an Indy car would fit his post-NASCAR career better has become an “Oval Meister” in INDYCAR.

He has plenty of confidence heading into Saturday night’s race on the 1.25-mile oval in Madison, Ill. It’s near the banks of the Mississippi River and in the shadows of St. Louis’s famed Gateway Arch.

“I’m really looking forward to it,” Johnson said. “Especially what I experienced at Iowa on the short oval, I’m much more in my element. It’s less thinking and more reacting and we put on a great show.

Johnson admitted he couldn’t find his rhythm at the Indianapolis Motor Speedway. He recognized the value of running the high line at Iowa Speedway and hopes to keep the high line cleaned off at World Wide Technology Raceway (WWTR) during Saturday’s race.

“These cars, it’s hard to dust off the outside lane because the marbles are so much larger than on a Cup car that they stick to your tires,” Johnson explained. “If you can keep it clean, we can have a second lane.

“Hopefully, I can inspire other drivers to help keep it clean and have more racing.”

Johnson said Iowa Speedway looks nothing like Bristol Motor Speedway, but in the race the track reacts the same as the East Tennessee short track. Some have compared WWTR as a combination of Martinsville Speedway or Darlington Raceway – two iconic tracks in NASCAR.

“The off-throttle time, chasing the edge of the gray, the aggression that is needed and the way you roll into the throttle was all like Bristol, even though it looks nothing like it,” Johnson said. “I don’t know what to expect at Gateway just yet.

“I got plenty of feedback from my fellow drivers and everybody thought I was possessed or crazy or somewhere in between. To me, it was normal oval racing. It showed me how comfortable I need to be in street and road courses.

“The aggression I had in Iowa was double the aggression I’ve ever had on a street or road course. I just need to trust the car and let it do its work. Learning to trust the downforce is more than I anticipated on road and street, but I’m still learning about it.”

Johnson said fellow driver Simon Pagenaud was very impressed with the subtleties of running the high line and how Johnson used it.

“He was very observant when he pointed that out, and I appreciated his complements as well,” Johnson said.

Johnson and the rest of the NTT INDYCAR SERIES drivers hit the track for practice Friday at 1 p.m. Eastern Time for one hour. Qualifications for the Bommarito Automotive Group 500 is from 4:15-5:15 p.m. ET and can be seen on Peacock Premium.

A special 30-minute “high line” session where nine cars run the high line to create an addition racing groove is Friday from 7-7:30 p.m ET. Each entry receives an extra set of Firestone Firehawk tires for the session only.

Johnson’s teammate, Scott Dixon, will represent Chip Ganassi Racing in that extra session. And fellow Ganassi driver Alex Palou will be driving the No. 10 American Legion livery featuring the “Be the One” campaign.

The final practice is scheduled for 7:45-8:45 p.m. ET Friday and can be seen on Peacock Premium.

Saturday’s Bommarito Automotive Group 500 can be seen on USA Network with the broadcast beginning at 6 p.m. ET. The green flag is set for 6:30 p.m. ET.