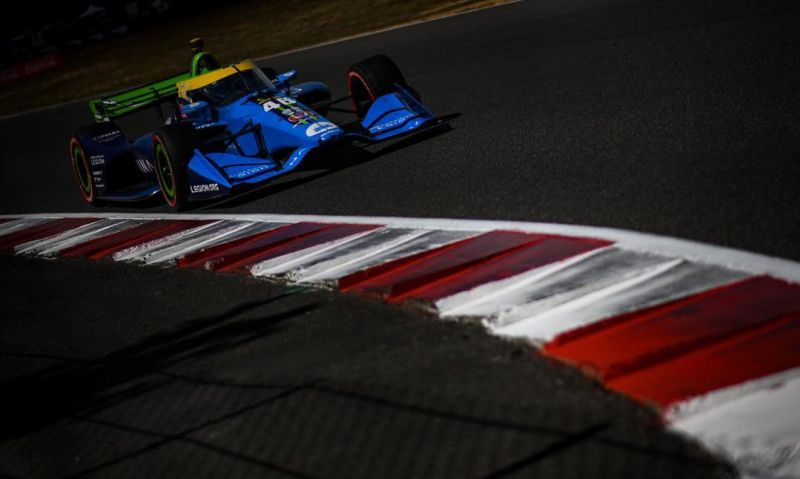 Jimmie Johnson was on a cruise around the 12-turn, 1.964-mile road course at Portland International Raceway in Sunday’s Grand Prix of Portland before Rinus VeeKay inexplicably put him in the outside wall entering Turn 1.

It happened on Lap 84 in what had been an all-green flag race. The contact ended Johnson’s day in the No. 48 Carvana/American Legion Honda for Chip Ganassi Racing as he finished 24th.

“I was just trying to be polite and make my way around the track at the end, but unfortunately the No. 21 did a fade in the braking zone into Turn 1 after I gave him the position,” Johnson explained. “We made some contact which put us in the wall and took us out.”

Prior to that, Johnson was just trying to keep up with the hectic pace of a race that pole winner and race leader Scott McLaughlin of Team Penske was setting.

Johnson spun earlier in the race in Turn 6 but was able to continue without making contact with anything.

A few times, the No. 48 threatened to venture out of the 20s, but the crash doomed the recently inducted Sons of The American Legion member to 24th place for the third time this season.

"We were just unfortunate today,” Johnson said. “We didn’t have the pace that I was looking for today. With the sun being out today, I don’t think the set-up in the car correctly compared to yesterday’s sessions.”

Johnson and The American Legion team at Chip Ganassi Racing wrap up their second season in the NTT INDYCAR SERIES Sunday in the Firestone Grand Prix of Monterey at WeatherTech Raceway at Laguna Seca in Monterey, Calif.

Team Penske’s Will Power finished second to his race-winning teammate McLaughlin and was able to increase his lead in the championship to 20 points over teammate Josef Newgarden. Six-time NTT INDYCAR SERIES champion Scott Dixon of Chip Ganassi Racing is also 20 points out, but Newgarden gets the position based on tiebreaker – five wins to Dixon’s two.

Dixon remains solidly in the battle for the 2022 NTT INDYCAR SERIES championship.

"That was definitely a fun race,” Dixon said. “We’ve got to work on qualifying and stop making it so difficult on us. The PNC Bank No. 9 had pretty good pace throughout the race today. The fuel mileage was exceptionally easy, which was a huge positive. The drivability was fantastic, so kudos to Honda as it made my day a lot easier. We’re still in the title hunt and we can definitely get this.”

Marcus Ericsson, this year’s Indianapolis 500 winner for Chip Ganassi Racing, also remains in the battle for the championship. He is fourth in the standings, 39 points out after finishing 11th.

"Starting from 18th, it was going to be a difficult task,” Ericsson said. “On Lap 1, I unfortunately got off-track and lost a few spots which was not ideal. From there on, I think the No. 8 PNC Bank crew did a good job to get us back up there in the field. We tried a few things with the strategy to get off-sequence. When we were in free air, we were really strong. The pace was pretty good in the No. 8 car. We made some good calls and made our way back up.

“On the re-start, we started from 16th and made our way to 11th and really showed our potential. It’s a bit disappointing result but it was a decent race.”

As for Alex Palou, the reigning NTT INDYCAR SERIES champion who has carried The American Legion colors in selected races this season, he was eliminated from the championship with a 12th-place finish.

"Starting fourth, we were running okay in the beginning and then lost a bit of pace,” Palou said. “We’ll check on what went on today and recover next week in Laguna.

“We still have one race to go, and we will try to win it.”