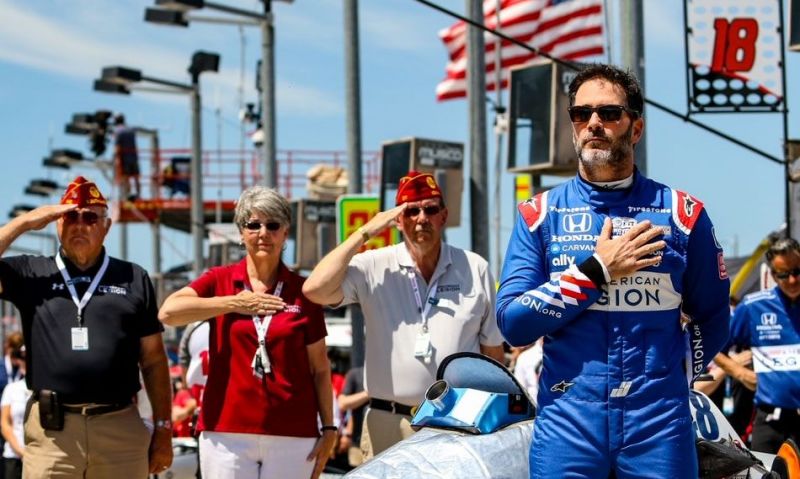 Jimmie Johnson saw a headline on Monday that said he was “retiring” from racing. The Sons of The American Legion member couldn’t help but laugh.

What Johnson wants to do in 2023 is the farthest thing from retirement. In fact, he wants to create a “Bucket List” of races that includes a number of NTT INDYCAR Series, a couple of NASCAR Cup Series races, a chance to drive on the winning team of the Rolex 24 at Daytona Sports Car race and a chance to compete in the famed 24 Hours of LeMans in France.

“I saw the word ‘retirement’ too and sort of chuckled, mainly because I tried to retire once and it didn’t work out,” said the seven-time NASCAR Cup Series champion who just completed his second season in INDYCAR. “To see it up there a second time is like the ‘Boy that Cried Wolf.’ I really don’t feel like this is the end of driving for me. It’s a chance to pivot, run in marquee events and have these amazing experiences that any driver would want to have. Carvana is very interested and expected to continue on in INDYCAR with me.

“The situation I’m in, I don’t think the word retirement isn’t correct, but it is certainly a pivot to less. Slowing down or part-time, I wore a rookie hat in INDYCAR and now maybe I should wear a part-time hat.”

Johnson is in the midst of putting together a schedule for next season that will allow him to compete in marquee events.

And fear not INDYCAR fans, Johnson plans on driving some of major races on the schedule, such as the 107th Indianapolis 500 and the Acura Grand Prix of Long Beach.

“I honestly could get really excited about all of them or any of them,” Johnson said. “Street courses provide such unique opportunity and clearly the street course at Long Beach has so much sentimental value to me. The ovals, I was much more competitive than on the street courses, especially the ovals that had multiple lanes. My NASCAR background came into play, and I was really competitive on the two-lane ovals.

“Road courses, to drive at Road America and Laguna Seca, those are amazing marquee race tracks to run on. I could honestly get excited about any of it, and it depends on what opportunity will develop.”

Johnson has the opportunity to pick and choose the races he wants to compete in. When he retired as a NASCAR Cup Series legend who won a record-tying seven championships along with 83 races, he was tired of the grind of a 36-race schedule. But he still wanted to challenge himself and compete in other forms of racing. At the top of his list was IndyCar, the series he dreamed of racing when he was a teenager in El Cajon, Calif., in the 1990s.

Johnson recently turned 47 and still has a competitive drive, he just wants to enjoy the experience of racing at this stage of his career.

“INDYCAR is certainly on the list,” Johnson said. “Clearly with the relationship I have had with Chip Ganassi (team owner), there have been more conversations INDYCAR-related.

“(Monday), in making this public knowledge now gives me the opportunity to speak to other teams, look at other opportunities in other series. I just recently made this decision and haven’t had any time to explore other options. I believe in the next month or so, I should know what opportunities are out there for me. I’m in a good place in the budget cycle for corporate dollars and for the potential to bring Carvana along, and any other interested parties. My timing is in a good spot, and we’ll see what the coming weeks bring.”

Johnson said being competitive certainly makes racing more fun. Although he wasn’t that competitive in INDYCAR statistically, he made dramatic improvement from his first race in April 2021 at Barber Motorsports Park to his most recent IndyCar race at Laguna Seca on Sept. 11.

He finished 16th that day, matching his career-best on a road course (also 16th at Mid-Ohio on July 3). Johnson’s best finish came on an oval, fifth at Iowa Speedway on July 26.

“It is a few degrees different than what I spent the bulk of my career doing. That allows me to open up the runway and gives me more time to experience this.”

Johnson doesn’t see this as the end of his INDYCAR career, he’s just taking a different direction to see where it leads him.

It’s all about the experience.

“Carvana came up with this tagline, ‘No Finish Lines,’” Johnson said. “Most people want to believe that’s reality and would like to challenge themselves and start a second career and pivot in life, but it’s tough to do. I have discovered these last two years how many fans and racers identify with what I have done and want to do that in their lives.

“Sure, I’m competitive and want to win races, but at the same time, I was willing to get uncomfortable. I can sit here and say I’ve had the most amazing two years. Even though I wasn’t winning races and was qualifying at the back of the field in all these road and street races, I was having the time of my life. You can pivot and get uncomfortable and have an amazing experience doing so.”

He has also left a positive impression in INDYCAR, including his many contributions to The American Legion. From serving as the point man on the Legion’s “Be the One” campaign to help prevent veteran suicide, to the many times he has met past national commanders and other VIPs from the Legion, to signing autographs at the Legion’s activation unit at INDYCAR races, Johnson was honored to be involved with the service organization.

The Legion’s involvement with Chip Ganassi Racing and Johnson also helped create an opportunity for INDYCAR to make the Legion an official charity in a multi-year agreement.

The Legion also helped support other drivers at Chip Ganassi Racing. Tony Kanaan drove the No. 1 American Legion Honda to an impressive third-place finish in the 106th Indianapolis 500 on May 29. Johnson was named Indianapolis 500 Rookie of the Year for his impressive “Month of May” performance at the Indianapolis Motor Speedway.

Johnson has made many new friends with fans and fellow competitors in the INDYCAR SERIES. He recently attended the Goodwood Festival of Speed with Chip Ganassi Racing’s six-time series champion Scott Dixon and four-time series champion Dario Franchitti the weekend of Sept. 16-18.

“It maybe wasn’t a light-bulb moment, I’m always very conscious of my head space,” Johnson explained. “As the season wore on, what it takes to be a full-time driver in the INDYCAR SERIES, I knew I was up to my limit of what I could commit to it.

“I didn’t want to make a decision in the moment. I took some time and had Dario Franchitti and Scott Dixon as a bad influence in the UK for the Goodwood race and a few beers in. In that process of being away, letting go and relaxing with the help of Scott and Dario, I was able to return home and really feel what I wanted to do and the decision I wanted to make.”

In Johnson’s rookie season in 2021, he started off slow, but made dramatic improvement by the end of the year. During his first full season in 2022, Johnson led laps, finished sixth at Texas Motor Speedway in March, finished a career-high fifth at Iowa Speedway in July and scored two 16th-place finishes on proper road courses at Mid-Ohio in July and Laguna Seca in September.

That gave Johnson the satisfaction that a seven-time NASCAR Cup Series champion could switch gears and prove that he could do it in the completely different form of racing in INDYCAR.

“My decision to not return was based on the feeling I have after running a full season, after experiencing the last two seasons, that the experience I was trying to achieve, I was able to achieve it,” Johnson admitted. “That was the bulk of my decision.

“Now that I’m pivoting, there are things to get excited about, but the bulk was feeling fulfilled and having the experience that I wanted to in INDYCAR.”

Johnson will be putting together his schedule for 2023 in the coming weeks. Now that he is a Sons of The American Legion member, he will continue to support the Legion’s efforts and programs.