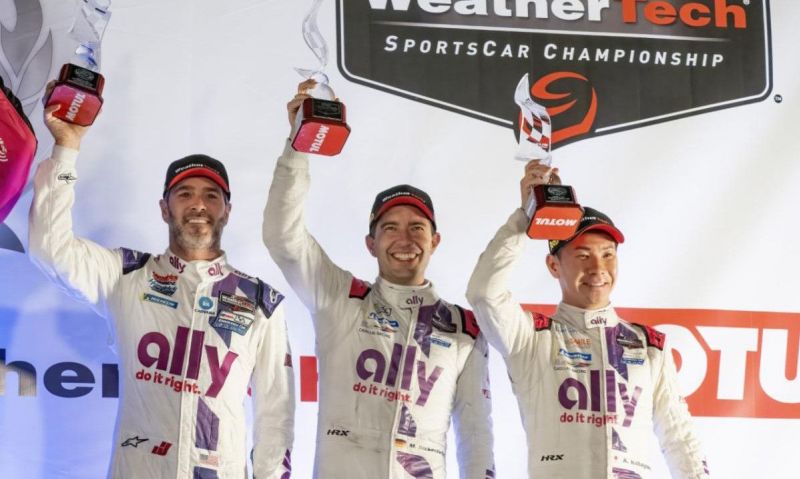 Sons of The American Legion member Jimmie Johnson and the Action Express Racing team were able to rally back from a mid-race penalty to finish on the podium of Saturday’s Motul Petit Le Mans at Road Atlanta. It was the final race of the 2022 IMSA WeatherTech Sports Car Championship.

It was also the final race of IMSA’s DPi division of Daytona Prototypes. That series will be replaced by LMDh next season, a car most closely aligned with international sports car racing rules and able to race in the 24 Hours of LeMans and the FIA World Endurance Championship in 2022.

Johnson was part of a three-driver teams that included Kamui Kobayashi of Japan and Mike Rockenfeller of Germany in the No. 48 Ally Cadillac. They were able to finish third and able to rally back from adversity earlier in the race.

Kobayashi started the race from the third row, after turning the sixth fastest qualifying lap of 1:08.984 in Friday’s 15-minute qualifying session. After just 13 laps, Kobayashi had the car in the top three and was up to second when he turned the car over to Johnson on Lap 63.

From there, Johnson, Rockenfeller and Kobayashi all had to deal with some adversity (i.e., penalties and traffic) at different times in the race. These issues caused the car to lose as many as two laps throughout the race, though the team did manage to get one lap back late in the race.

On Lap 390 with less than one hour left in the race, Kobayashi was in the No. 48 Cadillac and was running sixth. But when both drivers in the Chip Ganassi Racing Cadillac crashed into each other in Turn 1, they were in the wall and essentially out of competition for the victory. That allowed Kobayashi to move from sixth to fourth.

With 12 minutes remaining, the No. 10 Acura at Wayne Taylor Racing had contact with a car in the GTD class, forcing the No. 10 onto pit lane.

Kobayashi was up to third and that is where the team finished.

“It was a very challenging day,” Johnson said. “But, at the end of the race, we finally got some breaks to come back our way and ended up on the podium. It’s really tough trying to work traffic. I was brave sometimes, but I just needed to be more brave all of the time. I was just trying to be smart and cautious with the car.

“Ultimately, I left some speed on the table in my stint. But I got two full stints in the car each time I was in. This has been great, what an awesome opportunity. I’m so thankful to Ally, Action Express, and Hendrick Motorsports. I’ve been able to meet and race with a lot of great people. It’s really been a fun two years.”

Saturday’s third-place finish wraps up a two-year DPi program for the No. 48 Ally Cadillac. In the eight races that car competed, it finished with two podiums (the team’s first race and its last race - Daytona and Road Atlanta) and five Top-5 finishes.

Johnson was in the car for the Rolex 24 at Daytona and the Petit LeMans at Road Atlanta. He was reunited with Chad Knaus, his crew for his seven NASCAR Cup Series championships at Hendrick Motorsports.

Johnson is in the process of putting together his racing schedule for next season, which could include some INDYCAR races along with a NASCAR race or two, the Rolex 24 at Daytona and the 24 Hours of Le Mans.

“I’d love to be at Le Mans next year. I’d love to be at the Rolex 24,” Johnson said. “The series is going through a shake-up with the reconfiguration of the rules and classes, so I don’t have anything locked down yet, but I’m so thankful for this experience with Action.

“The support Ally has given us, Mr. Hendrick, Chad Knaus, all of Hendrick Motorsports. It’s been a fun two years, and I certainly hope I’m on the grid again next year.”