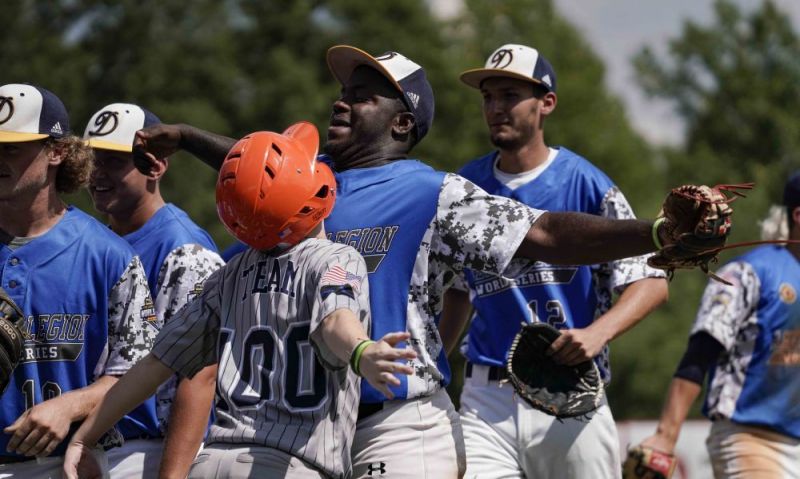 In a must-win game for both teams, Danville, Ill., Post 210 rallied from a late deficit to defeat Festus, Mo., Post 253, 7-5, to advance to the semifinal of the American Legion World Series as the runner-up in the Stripes Division.

Both teams threatened in the first inning. Illinois got a walk and a single but Jordan Duncan got out of trouble with a double play on a ground ball up the middle. Missouri got two on the same way in the bottom of the frame with one out, but Chase Vinson threw six straight strikes to get out of the jam.

In the top of the third, Duncan caught a bunt attempt and wheeled and threw to first for a double play to end a threat.

Vinson got out of trouble again in the third, striking out back-to-back batters again, stranding a runner at second.

The top of the fourth started with a great diving catch in center by JB Bridges, charging in to make the grab.

Festus plated three in the fourth to open the scoring. Eddie Martin led off with a double and went to third on a Chuck Pratt single. Back-to-back walks brought home Martin and a wild pitch and sacrifice fly brought home two more.

The Missouri defense continued in the fifth when Jake Leitner made another diving catch in right field.

Missouri nearly added to its lead in the bottom of the fifth, putting runners on first and third but Dalton Dalbey on in relief got a groundout to third. Logan Spicer knocked the ball down and made the long throw, barely beating Pratt's dive into first base.

Illinois quickly got back into the game in the sixth. Ernest Plummer walked and moved to second on a sacrifice bunt. Chase Rademacher followed with a double on a 1-0 count scoring Plummer. After Vinson dropped a first-pitch single into shallow center, Logan Spicer lined a single into right-center to bring around Rademacher and send Vinson to third. Lucas Hofer skied the first pitch he saw into shallow center and it fell into the Bremuda Triangle and, while the runner at second was forced out, the tying run scored on the play.

Festus put two on the sixth, but couldn't capitalize and Illinois made them pay the next inning by sending 10 batters to the plate in the top of the seventh. Danville’s Dalton Dalbey lined a single a middle to lead off, moved to second on a passed ball and went to third on a failed pickoff attempt. Ernest Plummer chopped an 0-1 pitch over the drawn in infield to give Illinois its first lead. Plummer stole second and Kotah Broeker rapped a single hard down the first base line to bring him home. The margin was extended to 7-3 when Rademacher, Vinson and Hofer all singled to bring home two more runs.

Missouri didn't go quietly, however. Colby Ott walked to lead off the bottom of the seventh and Jake Leitner poked one down the left field line, all the way to the wall, for an RBI double.

With the tying run in the on deck circle, Rademacher came on in relief and got a strikeout, but Pratt dropped a check-swing single over the heads of the right side of the infield to bring the tying run to the plate with one out. After a strikeout, the lead shrunk to two on a wild pitch, but it was not enough for a Festus miracle, as Rademacher got a groundout to close the door on his save and send Illinois into the national semifinal.

“It felt good to play well since I’ve been struggling so far in the regional and World Series but it was an overall team effort,” Rademacher said. “We all played well as a team.”

“It’s awesome,” Rademacher said of the Legion World Series. “There are over 3,000 teams that started the year and to be one of the last four standing feels really good.”

For Festus, the season ends as a historic one. Post 253 became the first team from Missouri to make the American Legion World Series since 2009.