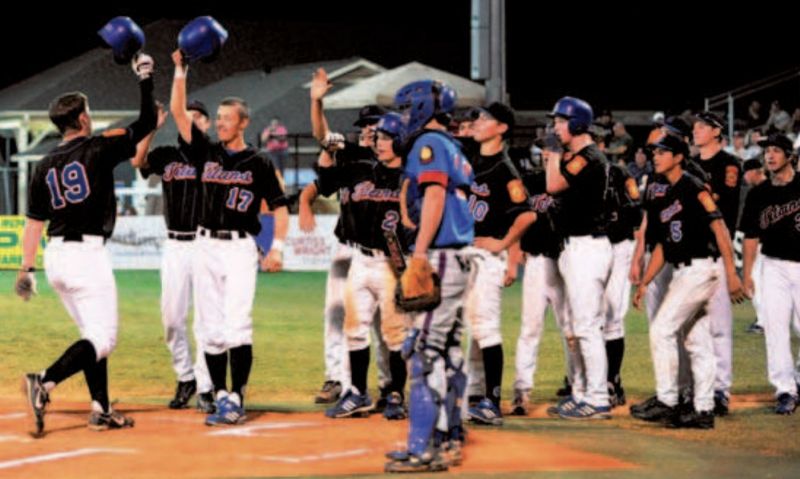 And the other drafted player, pitcher-infielder Jeff Malm, was the most valuable player at the 2008 Shelby ALWS and honored with the George Rulon National Player of the Year award.

Post 76 made 15 regional appearances in a 24-year stretch from 1992 to 2015 that included eight state titles, three regional titles and the 2008 ALWS championship.

In the American Legion Baseball season, the Titans finished with a 75-7-1 overall record that remains the most victories for an ALWS title team. And Las Vegas' 10-0 record in national tournament competition made it the seventh (and last) unbeaten team in American Legion Baseball national tournament competition since the regional concept began in 1960.

The state had begun competing in American Legion Baseball national tournaments in 1928 and didn't advance a team to the ALWS until 1986 when Las Vegas Post 8 made an appearance.

"I would say this is the best achievement our program has had," Sheff told The Las Vegas Sun after winning the championship. "We are talking No. 1 out of 6,000 teams."

Sheff, a Laguna Hills, Calif., native who played at Pepperdine, spent 10 seasons in professional baseball after being a 10th round draft pick of the Florida Marlins in 1992.

Sewald (.459, 11 RBIs) and Scott Dysinger (.444, 10 RBIs) were the top hitters in national competition with Malm batting .300 and recording five saves in his seven appearances.

After the 2008 season, 10 Titans played college baseball and Malm signed with Southern California before he signed with the Tampa Bay Rays after they selected him in the fifth round of the 2009 draft.

Roach played at Arizona in 2009 and College of Southern Nevada in 2010 before being a third-round pick of the Los Angeles Angels in 2010. He pitched 11 years in professional baseball and made the major leagues for the San Diego Padres (2014), Chicago Cubs (2015) and Seattle Mariners (2016).

Scott Dysinger and Erik Van Meetren played at UNLV, Jerry Mitchell at Creighton, Sewald at the University of San Diego, Wagner at Utah and Neil Lawhorn played for three colleges.

Field was a fifth-round pick of the Tampa Bay Rays in 2013 who has played in the major leagues for Tampa and the Minnesota Twins in the 2018 season. He began the 2021 season on the roster of the independent league Kansas City Monarchs.

Sewald was a 10th-round pick of the New York Mets in 2012 who has played in the major leagues for the Mets (2017-20) and began the 2021 season with the Seattle Mariners' organization.

And Wagner was a fourth-round pick of the Milwaukee Brewers in 2012 who played in the major leagues for the Brewers (2015) and the Arizona Diamondbacks (2016) before leaving baseball after the 2018 season.