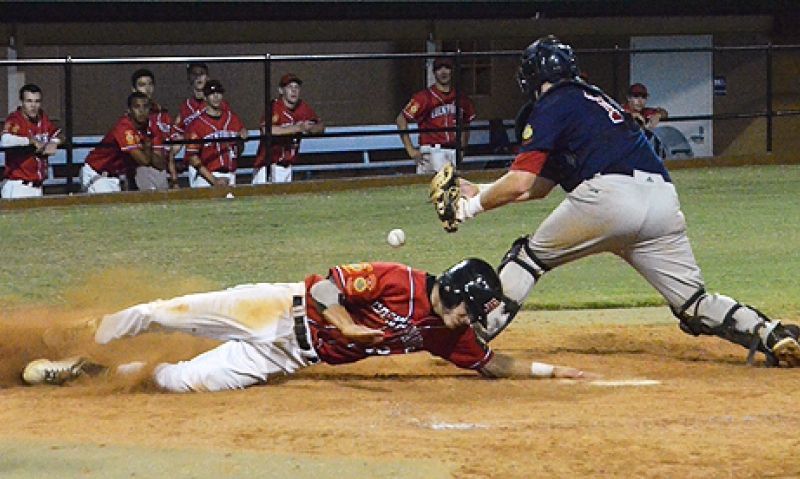 When Eden Prairie, Minn., arrived in Shelby, N.C., for the 2011 American Legion World Series, the team was determined to win a championship that had eluded its grasp the year before.

What Eden Prairie’s team found was an atmosphere befitting the first year Shelby had become the permanent home of the ALWS — but they also faced immediate adversity on the field.

Finally, Eden Prairie reached its goal, but only after arguably the most grueling day of baseball in ALWS history.

“It just felt different when we got there,” remembers Eden Prairie coach Scott Hackett. “The community was so interested and involved in being the host. It was fun to watch and see them go through it. Having kids ask for autographs and seeing the crowds at the games made it such a great experience.”

One year earlier, Eden Prairie had set dubious history. By losing two straight games to Midwest City, Okla., in Spokane, Wash., Eden Prairie became the first ALWS team to finish as runner-up after losing twice on the final day since 1985.

“We had a lot of our guys back from the year before when it was a tough way to finish the season,” Hackett said of Eden Prairie’s team that finished 39-9 in 2010. “They were pretty motivated as a group.”

But after rolling through the Minnesota state tournament it hosted and Central Plains Regional in Dickinson, N.D., with nine straight victories, Eden Prairie suffered its worst loss of the season in the first game of the 2011 ALWS.

Midland, Mich., banged out 12 hits, took advantage of four Eden Prairie fielding errors and knocked out Eden Prairie ace pitcher Adam Bray after 6 2-3 innings in a 14-3 win that was stopped after eight innings by the 10-run “mercy rule.”

The blowout defeat was a jolt to a team entering the tournament expecting a title.

“There wasn’t much said from our part to get any motivation,” Hackett said of his postgame speech. “They were plenty motivated. My message was simple. I said something like, ‘Let’s go play tomorrow, win and continue to stay here.’”

“Those guys met for a little bit after we as coaches left them,” Hackett said. “What was special about that group is that they were more player-led than anything. They didn’t need the coaches to get on them or anything like that. So when things mattered, they took things into their own hands.”

But the next challenge would be daunting.

Eden Prairie would have to beat a Las Vegas team with several eventual pros and beat Tupelo again in back-to-back games to win the championship it so desperately wanted — and all on a humid day when temperatures reached 87 degrees.

Bray got all the support he would need on second-inning RBI doubles by Tyler Ruemmele and David Belusky. (Bray would eventually spend four years at South Dakota State, was drafted in the 33rd round of the 2015 major league draft by the Los Angeles Dodgers and has been in the Minnesota Twins organization since 2018.)

“Adam Bray’s Las Vegas game was one of the best pitching performances that I’ve ever been a -part of,” Hackett said. “And looking back on it and knowing all of the high level players they had, it’s even more remarkable what he was able to do.”

Unfortunately, Eden Prairie team leader and shortstop Blake Schmit suffered a sprained ankle early in the game but played through the pain for the rest of the day after getting it taped.

Following a 38-minute break, Eden Prairie had to face Tupelo, Miss., and one of its two ALWS all-tournament pitchers, Will Cox, in the championship game; Tupelo’s other all-tourney pitcher Brandon Woodruff had gotten the victory in an 8-1 win over Midland, Mich., in the winner’s bracket final two days earlier. (Cox and Woodruff would in 2013 help Mississippi State to a College World Series runner-up finish and Woodruff would eventually became a National League All-Star pitcher for the Milwaukee Brewers.)

“There was the tough turnaround because the Las Vegas game was a grueling, intense game,” Hackett said. “I wasn’t sure what to expect. You know, we got something to eat and cooled down a bit. Sometimes that’s a good thing and sometimes that’s a bad thing. And we had an unfortunate first inning where we lose a fly ball that cost us a couple of runs and had kind of a rocky start.

“But, there again, the resilience of that team was amazing. We picked each other up.”

After Tupelo’s four-run first inning, Eden Prairie rallied to force extra innings with two runs in the second and one run apiece in the fifth and eighth innings.

Finally, in the top of the 13th, Eden Prairie pushed a run across when Jordan Smith’s fielder’s choice grounder drove in Tyler Peterson with what proved to the decisive run in a 5-4 victory.

In the bottom of the 13th, a play designed after the 2010 heartbreak helped Eden Prairie snuff out a Tupelo rally to secure its title.

After yielding back-to-back one-out singles, winning reliever Lance Thonvold executed a pickoff play at second base with Schmit before a grounder to third baseman Ryan Maenke was the game’s final out to end the game after 3 1-2 hours.

“If you go back to 2010, Oklahoma had run all over us,” Hackett said of Midwest City’s record-setting 56 total stolen bases in the 2010 ALWS. “From that point on, I figured we had to do something different as far as holding runners on. So we had our shortstop give signs on every pitch when there was a runner on second. That was the call Blake made on the spot, and he made the right call at the right time.”

Another Eden Prairie hero was catcher Danny Blasy, who caught all 22 innings that day in the sweltering heat.

“The intensity of that game, to be in extra innings and being the visiting team and knowing that if you don’t score, you could lose was something,” Hackett said. “It was just a long, draining day and those guys never lost focus and never lost the intensity and hung in there until the end against a very good team.”

By winning, Eden Prairie became the only the eighth team to win the ALWS after losing the first game of the event, and first since 1992. Eden Prairie also played the most innings of any team (22) on the final day of the tournament as it finished with a 43-8 overall record.

Schmit, who had won the 2010 James F. Daniel, Jr., Sportsmanship Award, was voted the 2011 George W. Rulon American Legion Player of the Year and won the Dr. Irvin L. “Click” Cowger RBI Award. It made him the first player in ALWS history to win major awards in two straight seasons. Schmit would eventually spend two years in the Minnesota Twins’ organization after he was a 26th-round pick in the 2014 major league draft.

The victory also made a two-time champion of assistant coach Mike Halloran, who was Rulon MVP when he led Edina, Minn., to the 1983 ALWS title.

“He was invaluable as a coach,” Hackett said of Halloran, who was head coach of feeder school Eden Prairie High School from 1995 to 2012 and had a 354-123-2 record with two state titles. “He was the guy who got me into that program and helped get me the Legion head coaching job.

“Just a great baseball mind and one of the best I’ve ever been around. He sees things that others don’t. I think it meant a lot to him to see his older son (Matt) on the 2010 team and younger son (Danny) on the 2011 team. I know that was very special for him.

“It’s pretty crazy to win it as a player and then win again as a coach, and I’m happy for him.”

John Buteyn was the other Eden Prairie assistant coach.

“I can’t believe it’s been almost 10 years,” Hackett said. “Time flies. I’d love to get back there to Shelby at some point. It was just first class treatment by the Legion organization. And Shelby was just tremendous. The hosts, the people at the ballpark, the grounds crew... just everybody.”