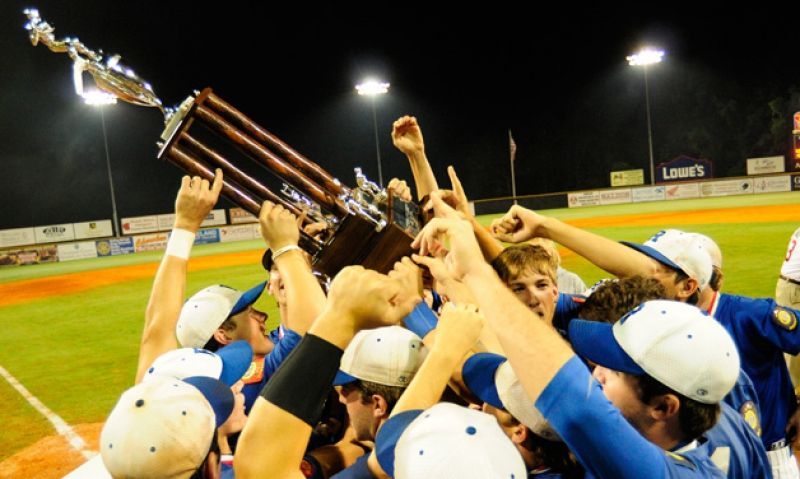 New Orleans and the state of Louisiana has long had great American Legion Baseball teams.

The state has advanced to the American Legion World Series 26 times, with five teams taking the title.

But if you talk to head coach Joey Latino, his fondest memories of the title run have little to do with the games and more to do with the interaction and support he and his team had with the fans in Shelby.

“The most memorable thing for me had nothing to do with baseball,” Latino said. “It’s the way the folks of Shelby, the Legionnaires and the people of Shelby, embraced the entire event.

“When we returned home as champions, one of the comments I made to a local newspaper guy here was that we were sort of the adopted son in Shelby. They really took to our guys. Our guys just really enjoyed the full experience. And for me, this whole thing extends way beyond baseball. It’s about life experiences that these boys are going to really remember, you know, 15, 20, 30 years down the road.

“And, to a man, they’re going to remember that as much as winning a championship. The people of Shelby were just warm and hospitable and welcoming to us.”

“He was really outgoing and could just walk into a room of complete strangers and within 10 minutes he would own the room,” Latino said of Voirin. “There was just a magnetism about him that the folks of Shelby really enjoyed and were drawn to. Maybe that was my imagination, but I honestly felt the town was pulling for us in a special way like we were a local team.”

Sponsored by Retief Oil and comprised exclusively of players from New Orleans’ Jesuit High School, Post 125 came to Shelby after winning the Louisiana state title and going 5-0 in the Mid-South Regional it hosted.

Post 125 outscored its five regional opponents by a 51-6 score and only the 4-3 title game win over Columbia, Tenn., was even competitive.

New Orleans found the competition much stiffer in Shelby in the ALWS.

Post needed 11 innings to beat Milford, Conn., 5-3 in its opener, then rallied from a 7-1 deficit to beat Omaha, Neb., 8-7 in its second game that advanced the team into the winner’s bracket final against Brooklawn.

In a game that started on one day and ended on the next because of a rain delay, Post 125 edged Brooklawn 6-5 to advance into a low-pressure game against Bellevue, Wash. A win would mean New Orleans would have to lose twice on the final day while a loss simply sent Post 125 into a “winner-take-all” title game.

Whether it was the lack of pressure or not, Post 125 suffered its only national tournament loss of the year, 10-6, but still advanced into the championship game.

But winning the title took patience as not only did New Orleans have to wait and see who it would play — Brooklawn eliminated Bellevue 4-3 to earn a berth in the finals — but it also had to wait out the third significant rain delay of the five-day tournament.

The story of the final game was Post 125 pitcher Emerson Gibbs, who fired a complete game shutout against a Brooklawn team that would win the next two ALWS titles with many of the same players who advanced to the 2012 title game.

“That was Emerson,” Latino said. “He was just the kind of guy that any time you saw him take the mound, you know that the eight guys around him were thinking, ‘We’re going to be awfully tough to beat.’

“The night before — and right after we lost to Washington — I met with the guys in my room, I remember telling them, ‘Fellas, when you reach this point, you have to realize that you’re not here by accident. You’re here because of your hard work, your dedication and clearly your talent.’ Those are the things you’re going to need to take onto the field in the championship game.

“Luke Voirin and Brady Williamson and Tony Fortier-Bensen stayed behind after the meeting had ended. And those three guys just had a look of confidence in them and it was Brady Williamson that looked at me and said, ‘Honestly coach, I don’t think there’s any way we’re going to lose.’

“I said, ‘Well, it’s taboo to say that but I agree with you. I love the way you guys are playing right now and there’s a level of confidence in you guys that has exceeded even my expectations.’ Then I said, ‘Well I know one thing for sure: Emerson is going to give us his very best effort.’

“And when you look at what he did already that summer, he outdid himself. That night was just stellar. It’s one of the best performances probably in the history of that tournament.”

Gibbs needed 105 pitches to face 29 batters in a three-hitter where one of the runners was erased by a double play. He struck out four, coaxed 12 groundouts and 10 fly outs.

For his efforts, Gibbs was named George Rulon Player of the Year and won the Bob Feller Award for most strikeouts (26) in national American Legion Baseball competition in addition to being named MVP of the title team and an all-tournament selection. Gibbs would later spend four seasons at Tulane University from 2013 to 2016, capped by being a first-team American Athletic Conference selection in 2016 when he helped the Green Wave to a NCAA regional runner-up finish. A 33rd-round draft pick of the Milwaukee Brewers in the 2016 draft, Gibbs spent one season in that organization.

Teammates joining Gibbs on the all-tournament team were designated hitter Voirin and shortstop Fortier-Benson. And Matthieu Robert shared the Irvin “Click” Cowger award for most RBIs (16) in national tournament competition, including three in the title game.

And Mitchell would become the second professional on the New Orleans 2012 roster. A 14th-round pick of the New York Mets in 2018, Mitchell began the 2021 season as a pitcher with Class AA Binghamton in the Mets’ organization.

“It’s something that, as a coach, I tried not to fall into the trap of saying ‘This team can go this far...,’” Latino said. “But I will say this: Going into that summer, I looked at our roster and saw an incredible amount of depth, especially on the mound. And I think, especially with a nine-inning format, if you were going to have any chance to go far, you had to be incredibly deep on the mound.

“So, did I think we could make it to the World Series? I really didn’t think along those lines. But did I think we had enough pitching for that summer, yes I did.”