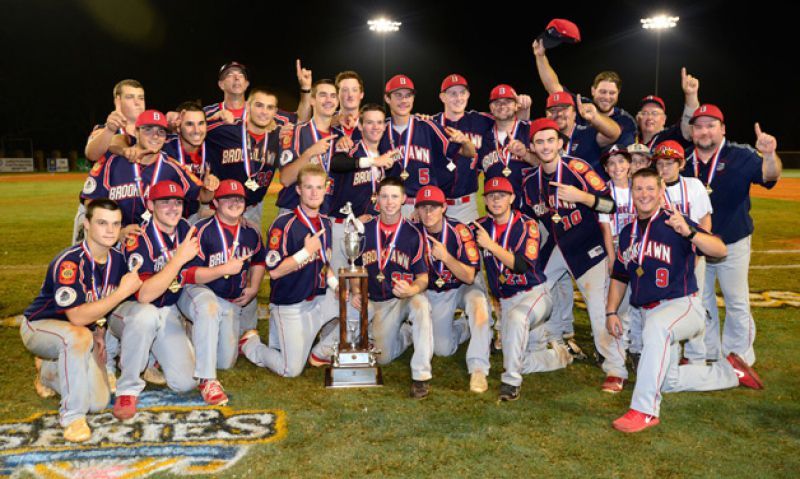 But no ALB team has been more dominant than Brooklawn, N.J., was in the 2010s.

Post 72 not only set American Legion World Series history by making five straight appearances from 2011 to 2015, it set more history with three straight title game appearances and became the fifth back-to-back ALWS champion in 2013 and 2014.

It helped create a motivation that his son and current coach Dennis Barth says has been there since the day he was born.

“Every year our goal is to win the World Series,” Dennis Barth said. “It took my pops 40 years to do it — and I was an assistant coach and my brother Joe (Barth Jr.) was the head coach in 1991 — and we won it again in 2001 before those last two titles.”

Dennis Barth was actually born during Brooklawn’s second of 16 ALWS appearances in 1961.

And because of the pursuit of an ALWS title has been a Barth family goal since Joe Barth Sr., started the Post 72 program in 1952, the ALWS is part of a family tradition.

“When I grew up, if we didn’t make it to the World Series, our family vacation was at the Legion World Series,” Dennis Barth said. “My father and my brothers and I would watch the games and try to figure who we thought was going to win every year that we weren’t there.

“So I’ve definitely grown up around it.”

“But we had (Mike) Shawaryn back who was a good pitcher. And that was a good start. We also had (John) Murphy that was a real good pitcher. And Tyler Mondile who ended up being a high draft pick. So we had some pitching. But our team itself — the eight guys in the field — other than our catcher (Jon Theckston), it was all new guys.”

Shawaryn, Murphy and Mondile led a team that went 4-1 in the ALWS.

The only loss came to Petaluma, Calif., by a 14-4 score in a game in which Brooklawn knew it was already in the title game. And the next day after Petaluma eliminated Waipahu, Hawaii, 8-2, Post 72 avenged the earlier loss with a 10-0 win in seven innings by the 10-run “mercy rule.”

Shawaryn remains active in baseball in 2021 as he is pitching for the Kansas City Royals’ Class AAA affiliate in Omaha, Neb.

Brooklawn’s 2014 team was even more dominant, even as it suffered Post 72’s only regional loss during its five-year ALWS run.

But after losing 8-3 to Cecil, Md., in the winner’s bracket final of the Mid-Atlantic Regional Brooklawn hosted in Camden, N.J., Post 72 won its next eight games on its way to the ALWS title — and only two of those games were even close.

“It’s fun no matter how you win,” Dennis Barth said. “And it is less nerve-wracking when you win like that because there’s so many close games throughout a year.”

And Tyler Mondile and Todd, a 21st-round draft pick in 2018 of the Los Angeles Dodgers, have played professionally.

“We’ve certainly been blessed with talent, committed players over the years,” Dennis Barth said. “They know they’re going to play every day all summer long and our goals will be high.”