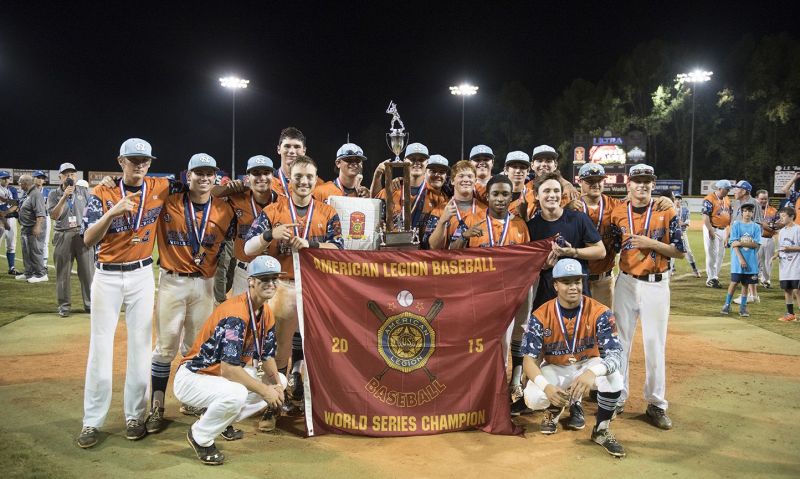 He had no idea that the team would set history — and give him memories that remain today.

“In my lifetime — and I was a Navy pilot for 25 years — it is one of the most uniquely singular events that I’ve ever been a part of,” said Livingston, who has been athletic officer since 2013. “And the kids, including some of the college players who have played at a high level, they will tell you it was the most fun that they ever had.”

Livingston says what he remembers most is how well the players supported each other.

“The chemistry was so good,” he said. “There was not a selfish player on that team. They all pulled for each other and when their number was called, they did respond.”

Repeated comebacks in the ALWS in Shelby, N.C., give an indication of that, starting with the team’s first game against perennial power Midland, Mich.

Trailing 1-0 entering the bottom of the ninth inning, Chapin-Newberry scored twice as Zach Ziesing hit an RBI double to tie the score and Peyton Spangler drew a bases-loaded walk for the game-winner.

After losing 5-2 to New Orleans in its second game for its first and only loss of the season, two more comeback wins gave Chapin-Newberry a berth in the championship game.

Trailing 6-0 after four innings to Cromwell, Conn., Chapin-Newberry closed within 6-1 in the seventh inning before a six-run eighth inning gave it a 7-6 win.

Justin Hawkins, Kevin Burton and Landon Allison led the comeback as Hawkins’ solo home run put Post 193-24 on the board in the seventh. Burton’s three-run double tied the score at 6 and Allison’s RBI single for the winning run were key hits in the eighth-inning rally. Josh Haney was the winning pitcher and Patrick Yoder coaxed a game-ending double play for the save.

The 4-3 semifinal win over Medford, Ore., was even more dramatic.

Trailing 3-2 entering the top of the ninth inning, Ziesing tied the score on a sacrifice fly and Danton Hyman drove in the go-ahead run on a squeeze bunt. Spangler was the winner and Yoder retired the side in order in the bottom of the ninth for the save.

The championship game gave Chapin-Newberry the opportunity to avenge its lone loss, and Post 193-24 routed New Orleans 9-2 for the title.

Hawkins hit a two-run home run in the first for a 2-0 lead and Chapin-Newberry added three in the sixth and four in the eighth for a comfortable championship game victory. Ryne Huggins threw 4 2-3 innings of relief for the pitching victory.

“It felt like a championship game and it didn’t matter who we would’ve played,” Robert Livingston said. “We were up for every single game. I remember talking to Justin Hawkins and he said to me, ‘Hey, don’t worry about us. We’ve got this.’

“And that’s how we played. And you couldn’t get Ryne Huggins off the mound. He had already pitched a complete game and then he came back in that last game against New Orleans.”

Hawkins also was an infielder on the all-tournament team and was joined by teammates Spangler (infielder), Hyman (outfielder) and Huggins (pitcher).

In the summer of 2020 during the coronavirus pandemic, Robert Livingston had planned on having a five-year team reunion.

Instead, he took to social media to remember the team’s extraordinary season.

“I tweeted out every score from every game on the day that we played it,” Robert Livingston said. “And to see the kids commenting back and forth has been something. They’ll see a box score from 2015 and talk about it.”

In the years since, several of the players went on to play collegiately and one is currently in the pros.

Allison, Hyman, Smaltz and Spangler played for Newberry, Burton for Florence-Darlington Tech, Crotwell for Clemson’s club team, Haney for USC-Sumter, Hawkins for USC-Sumter and Clemson, Huber for Limestone, Huggins for Clemson and Houston, Andrew Livingston for USC-Salkehatchie and Presbyterian, Stoudamire for Charleston Southern and George Mason and Stone remains in the Chicago White Sox organization after playing for South Carolina and Walters State Community College.

Robert Livingston says folks in the Lexington County town of Chapin and the Newberry County town of Newberry get reminded of the team’s accomplishment whenever they drive into either of those towns.

“There’s a sign coming into Newberry and Chapin that says, ‘Home of Chapin-Newberry, 2015 American Legion World Series Champion,’” Robert Livingston said. “I see that sign almost every day and it always makes me smile.”