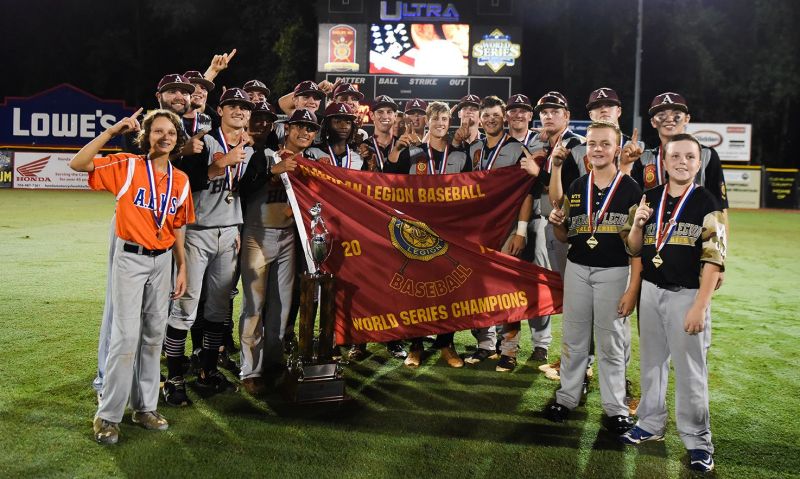 Texarkana, Ark., American Legion Baseball coach Dane Peavy knew when he brought his team to the 2016 American Legion World Series that no team from Arkansas had ever won the event.

Peavy also knew that his team had a determination that had already made it a champion.

That attitude served Texarkana well as it repeatedly overcame adversity to set history and win the 2016 ALWS in Shelby.

“The players had to have the confidence that they belonged there, that they could compete there, and they could win there,” Peavy said of his team’s attitude entering the 2016 ALWS. “And you could tell their confidence grew each day. And that we were not going to be denied in certain situations. We ended up being behind in every game that we played. And we ended up making a comeback in every game that we played.

“Our guys are the true epitome of resilience.”

Texarkana finished with a 42-5 record, but the team remembers its last three losses most because they provided motivation.

In the Arkansas state tournament, a loss to two-time defending state champion Bryant had to be erased by two close wins (6-4 and 9-7) over Bryant on the final day of the tournament.

Then in the Mid-South Regional at Little Rock, Ark., Pontotoc County, Miss., routed Texarkana 11-0 in the first round.

But as it did in the state tournament, Texarkana found resolve in facing no margin of error to keep advancing. The Razorbacks eliminated perennial power New Orleans, 4-1, in a loser’s bracket semifinal, then knocked off Ada, Okla. (7-4), Bryant (6-5) and Sedalia, Mo. (5-0) before Mother Nature intervened.

Due to excessive rainfall, the forecast for more rain and a deadline approaching to send a winner to the ALWS, American Legion Baseball officials declared Texarkana the winner since three one-loss teams remained in the tournament — Texarkana, Bryant and Sedalia — and Texarkana had beaten the other two teams.

Had a championship game been played, Peavy would’ve missed the contest since he had begun a new job as a teacher at Airline High School in Shreveport, La., and the first day of school was a mandatory day for him.

“We started school at 7:30 that morning and I got a text at 8:30 wanting me to call the commissioner,” Peavy said. “He just plainly stated, ‘Where do I need to send these tickets to?’ I said, ‘I don’t know what you mean?’ I guess that was his way of congratulating me because he said, ‘You’re going to the World Series.’

“I really didn’t know what to say. I was kinda speechless.”

Peavy did understand how disappointing it had to be for Bryant.

“It was a whirlwind of emotion,” said Peavy, whose team had won four of the six games it had played against Bryant that season. “I know that day was not a good day for Bryant. And our guys weren’t exactly satisfied that we didn’t get to play. And there’s been a lot of misunderstanding and a lot of misconstrued things that went on.

Once in Shelby, the team heard chatter that Texarkana didn’t deserve its spot.

Peavy actually overheard another team discussing it at the hotel.

“I thought to myself that was some harsh criticism for somebody that didn’t know what happened,” Peavy said. “But we also used that as a little motivation for guys.”

Just as they had done in the regionals, the Razorbacks lost their opening tournament game — 4-2 to San Mateo, Calif. — before winning four straight games to take their title.

Texarkana beat Cumberland, R.I., 8-3, and Leesburg, Va., 7-5, to advance into the semifinals. There, the Razorbacks beat previously unbeaten Rockport, Ill., 4-1, before facing a daunting challenge in the title game.

Not only was Texarkana to face Rowan County, N.C., but it would do so with virtually all of the 8,496 fans in attendance rooting for Rowan County, which is located 65 miles east of Shelby.

And when Rowan County took a 4-0 lead and were threatening for more in the fourth inning, Peavy confirms the dire situation his team was in at the time.

“I’ll tell you what — and I can admit this now — one of my best friends was our assistant coach Jonathan Orr and we always joke around about that exact moment,” Peavy said. “We’re down 4-0 in the fourth inning and they had the bases loaded with one out. And the fans were going crazy. There’s 8,500 screaming their heads off for the home team and we’ve got our contingent of maybe 60 fans.

“So coach Orr looks at me and says, ‘If any more runs score, we’re about to get run out of this place.’ And I’m like, ‘You’re exactly right. We’ve got to do something like a get a double play — and quick.’ And, sure enough, two pitches later, that’s what happens and we get out of it.”

Texarkana then scored four in the top of the fifth to tie the score for a game it eventually won 8-6 in 12 innings.

“So, whenever we get together — and we do a lot — we talk about what kind of luck we had to have to get out of that situation,” Peavy said. “Because we were literally one error, one base hit, one wild pitch away from probably ending it right there. Against a really good team like Rowan County, it’s hard to overcome a five-run deficit. It was tough enough to overcome a four-run deficit. So were really fortunate.”

After six straight scoreless innings, Nick Myers’ two-run single gave Texarkana a 6-4 lead in the top of the 12th and Parker Ribble added a two-run double to make it 8-4.

The Razorbacks needed that four-run lead to survive Rowan County’s last rally that didn’t end until pitcher Zac Harrington snagged a sharp grounder and fired to first baseman Will Smith to end the game with the bases loaded.

Smith was later honored as George W. Rulon American Legion Player of the Year and Texarkana’s Logan Vidrine was given the James Daniels Sportsmanship Award. Smith, outfielder Blake Hall and pitcher Austin Cross were named to the all-tournament team.

Arkansas had only one team previously even advance to the ALWS title game, the 1947 Little Rock team.

Since winning its titles, 16 of the Texarkana players have played college baseball and one, Phillips, is currently playing professionally. A left-handed pitcher, Phillips is in his third year in the Kansas City Royals’ organization.

“It’s probably the most special moment of my coaching career,” Peavy said. “It’s not just about the win and the win is great, especially when you’re the first team in Arkansas history to win the American Legion World Series. That’s just unimaginable. I never in my life dreamed that was possible.

“But, overall, what makes it the best is the fact of who I shared it with. Those kids are some of the best kids I’ve ever been around. The parents, the kids and their resolve and willingness to be a part of something that’s bigger than themselves. We still actually share a group text that we still talk on day to day.

“And every December about a week or two before Christmas, we get together (at a restaurant) and call it ‘The Championship Dinner.’ We’ve had anywhere between 10 and sometimes 14 players show up. And we eat together and have fellowship, share good times and tell stories. It’s something we want to do every year. And who knows. In five or 10 years, I hope we’re talking about seeing their families and all of that.

“So, for us, it’s kind of the gift that keeps on giving.”