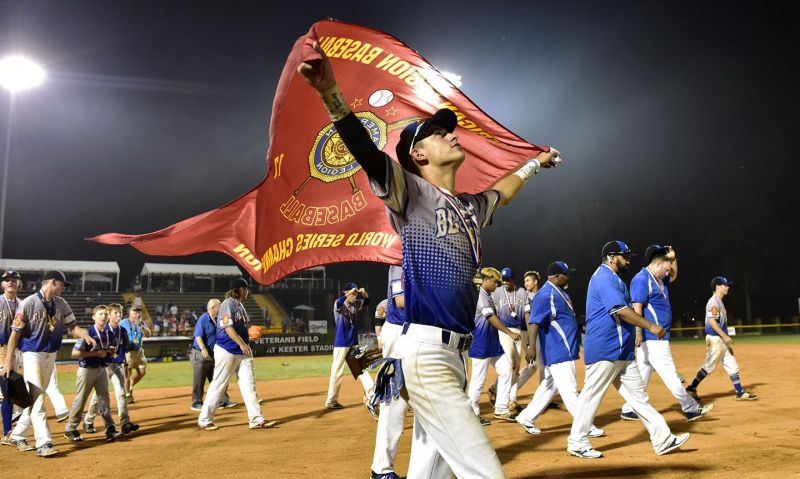 When Henderson, Nev., Post 40 came to the 2017 American Legion World Series in Shelby, N.C., it was seeking to become the second champion from Nevada.

While it would accomplish that goal, Post 40 took one of the most unconventional paths to the title in the long history of the event.

Post 40 is to date the only team to win the ALWS after having a losing record in pool play. They also became the 16th, and so far, the last, team to win the title after a first-day loss.

And their success was so unexpected that their coach thought their season was over after losing a second game in three-game pool play.

After the 1-0 loss to Midland, Mich., “Our coach (Scott Baker) was like, ‘Hey, it’s been a good run. You guys busted your butts and played hard. I couldn’t be any happier. You went undefeated in Colorado (in the Western regionals) so you’ve played really well,’” Post 40 pitcher Shane Spencer said. “So he was basically saying goodbye and one of the host Legion World Series people came up and was like, ‘Hey, you’re still in it.’

“At that moment, we all went crazy like it was a championship and I think from that point on, we just knew it. We knew we were going to win the whole thing.”

Post 40 promptly beat Bryant, Ark., 7-3, in the semifinals to advance into the championship game against previous tournament unbeaten Creighton Prep of Omaha, Neb.

“After we lost that first game 9-1 to Nebraska it lit a fire for us a little bit,” Spencer said. “Of course, we didn’t expect to lose. But we pretty much just let it go and went to the next one.”

Spencer was given a key role in avenging the loss when he was named the starting pitcher of the title game.

“I don’t think there was any difference other than it being the championship game,” said Spencer, who was a few days away from starting his junior year at Las Vegas Basic High School. “My biggest thing was to not let the, ‘Oh my gosh they beat us 9-1 in the first game,’ wreck me or change me.

“I was young and I didn’t know who was on the team or how old they were. I just had the mentality of, ‘How far can you hit my fastball?’ And knowing I had my curveball and splitter in my back pocket. And everything just worked. We had great pitch sequencing and I think we threw them off a little. They were a great fastball-hitting team but it was hard for them to hit that outside corner fastball.”

Spencer fired a three-hit complete game performance that was enough for Post 40 to come away with a 2-1 victory for the championship. The effort gave Spencer a 2-0 record in the ALWS — he threw a 1-0 one-hit victory over Shrewsbury, Mass. four days earlier — and he was named George W. Rulon Player of the Year.

The only run Spencer allowed came in the bottom of the first inning but Post 40 scored runs in the third and sixth innings to take the 2-1 victory. Jack-Thomas Wold scored on a RBI single by Garrett Giles in the third to tie the score at 1 and Nick Thompson drove in J.J. Smith with what proved to be the game-winning sacrifice fly in the sixth.

“There was some stress going into it,” Spencer said. “But after playing them the first game of the tournament, we felt that we were going to meet them again. We really did. And we were thinking, ‘That was the team we’re going to have to beat in the championship game.’

“The whole pitching staff that we had watched the teams we were playing, watched who they threw, how they threw and what each hitter did. So we kind of scouted each team and we were pretty confident that no matter how bad they beat us in the first game, we were thinking, ‘Nobody is going to beat us twice.’”

Wold was the Rawlings Big Stick Award winners for most total bases in national tournament competition with 29.

Now preparing for his third season at Central Arizona College, Spencer is one of 18 eventual collegians on the 2017 Post 40 roster, and one of them is currently playing professionally.

Nelson, a second-round pick of the Arizona Diamondbacks in 2019, is in his second season in that organization’s farm system this summer.

“A lot of us still stay in touch,” Spencer said. “And we still enjoy sharing memories of us winning the championship.”