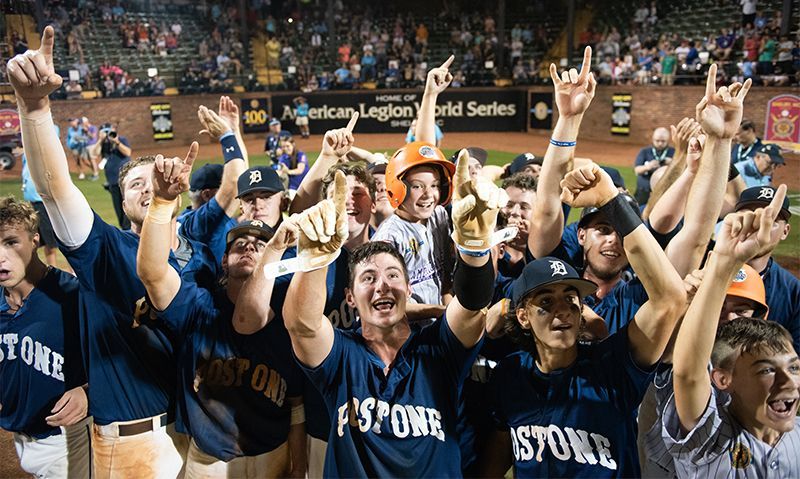 No Delaware team had ever won an American Legion World Series, only four had even advanced that far and only one of them had won a single ALWS game.

Even worse, no Delaware team had advanced to a regional championship game since 1990.

But, as Treml knows, baseball games aren’t won or lost by history.

They’re won or lost by players.

And his players had a resolve and determination to do what had never been done.

“We had the confidence that we deserved to be there and we were just going to see how far we could take this,” Treml said.

Winning the state title and finishing 1-2 in the 2017 Mid-Atlantic Regional in Purcellville, Va., gave many of the 2018 players an indication of what it might take to win the first ALWS title in Delaware history.

After all, Wilmington lost 11-9 to eventual regional champion Hopewell, N.J., on the second day of the regional before being eliminated by host Leesburg, Va., 9-8 in 11 innings on the third day of the 2017 regional.

In 2018, with many players returning, Treml said he and his team planned to have another good season.

“I’d say we had more pressure trying to win the state because the expectations were high after we’d won in 2017,” Treml said. “If we hadn’t have won the state tournament it would’ve been a disappointment.”

But Post 1 faced Newark Post 10 in the state title game at New Castle’s Wilson Field and won more impressively than in 2017. After taking a 10-9 victory in the 2017 championship game, Wilmington routed Newark 10-1 in 2018.

The Delaware state titles were Post 1’s first since 2000, and 15th and 16th overall in team history.

The 2018 Mid-Atlantic Regional returned to Purcellville, Va., and Wilmington was prepared.

“When we got to the regionals, having been there the year before, it was big for us,” Treml said. “Some of those guys had played for us for two or three years and we knew we could play with those teams.”

After losing 10-9 to Souderton, Pa., Wilmington rebounded by routing host Leesburg, Va., 10-0, in five innings in the title game to win Delaware’s first regional title since 1976.

“It sounds crazy but the further we got, the easier it became,” said Treml, who left coaching to work for a technology company in Delaware.

That 2-1 record advanced Post 1 into the single-elimination semifinals where they edged previously unbeaten Midland, Mich., 5-4, then took a dramatic 1-0 win over Las Vegas, Nev., in the finals to win the historic championship.

“When we got to Shelby, the atmosphere was amazing,” Treml said. “You feel like a rock star for a week. It’s a memory that our coaches and players will take away forever. The way we were treated was top-notch.

“The further we got, the less pressure we felt. And the kids made it feel that way. They were very mature for their age. They didn’t put added pressure on themselves. They approached a World Series game same as they approached a state tournament game or a regular season game. They had the same mindset all season long.”

Chris Ludman pitched a shutout in the championship game and was named 2018 George W. Rulon American Legion Player of the Year. Colmery picked up the Rawlings Big Stick Award for most total bases when he hit a walkoff RBI single in the title game.

Ludman and Colmery were joined on the all-tournament team by teammates Eric Ludman and Nate Thomas.