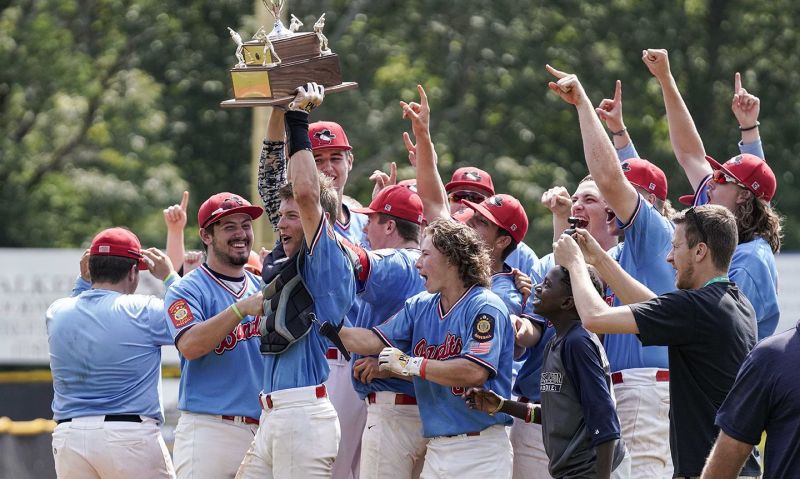 And that’s before Idaho Falls advanced to a title game that was suspended by a soaking rainstorm.

Not only was the team pursuing the first ALWS title in Idaho history, but the suspension meant the team would have to pursue a championship without its record-setting ace pitcher due to the pitch count rule.

But none of that mattered to the Post 56 Bandits, who continued to defy convention with a 5-3 come-from-behind win over Fargo, N.D.

Post 56 coach Ryan Alexander said the confidence and resilience the team had showed just to get to the finals served it well when it faced one final challenge entering the resumption of the suspended game.

“Throughout the year, we had dealt with some adversity, whether it was travel issues or other things and the kids handled everything that came their way like pros,” Alexander said. “One of the things that we talk about in our program a lot is trying to control what we can control. Those kids did a masterful job of doing that. And it’s something that we actually talk about and preach.”

Just to advance to the finals, Idaho Falls won after a rain delay in a 4-3, 9-inning victory over Danville, Ill., that meant their game didn’t end until 1:16 a.m. EDT on Tuesday of the 2019 ALWS.

So when the Post 56 Bandits trailed 2-0 when rain came in the second inning of their 6:30 p.m. game that evening, they were determined to rally when they returned to action at 10 a.m. Wednesday morning (8 a.m. Idaho local time).

“You know, we come from an area of the country where our spring seasons have crazy weather,” Alexander said. “We usually start our spring season with snow on the ground and a shovel in our hands. So we have a lot of early-season weather situations and the kids are kind of used to that.

“But I’ll tell you this: That Shelby rain was like nothing that we had ever witnessed. I don’t think I’ve ever seen rain that hard. The grounds crew at the Shelby stadium did a phenomenal job in getting that field ready.”

With sunny skies and humid weather for the restart, Idaho Falls scored three times as soon as the game restarted and relied on pitcher Andrew Gregersen to win their state’s first ALWS championship.

“It was a good group of kids that played well together,” Alexander said. “Several of them had played together growing up in club ball or travel baseball over the years. That was kind of an exclamation point and a last hurrah for some of the kids. So to go out that way was a dream come true.”

Gregersen filled in for ace Randon Hostert, a Texas Rangers 2019 draft pick now at the University of Utah.

Hostert had thrown 32 pitches in his one inning of work before the game was suspended. Hostert had thrown an American Legion-record two no-hitters in the Northwest Regional tournament in Lewiston, Idaho, to help Idaho Falls advance to its first ALWS.

The Bandits, who finished with a 61-6-1 overall record, advanced to the ALWS by going 5-1 in the regional.

In Shelby, Idaho Falls beat Fargo, 7-3; Shrewsbury, Mass., 4-0; and Randolph County, N.C., 4-3; in pool play before outlasting Danville and Fargo in the semifinals and finals, respectively.

The win was celebrated and honored in their home state as well as earning the team a trip to the 2019 World Series won by the Washington Nationals over the Houston Astros.

Receiving such high honors helped Alexander understand the significance of what his team had accomplished.

“It definitely made how the American Legion program honors their teams and the accomplishments all the more special and phenomenal.”

Since winning the title, the players had to navigate the COVID-19 pandemic and its subsequent health and safety protocols to continue on with their athletic careers.

Jaxon Sorensen is preparing for his freshman season as a Gonzaga baseball recruit.

And two others went to College of Idaho to play two other sports: Willie Nelson (football) and Paul Wilson (basketball).