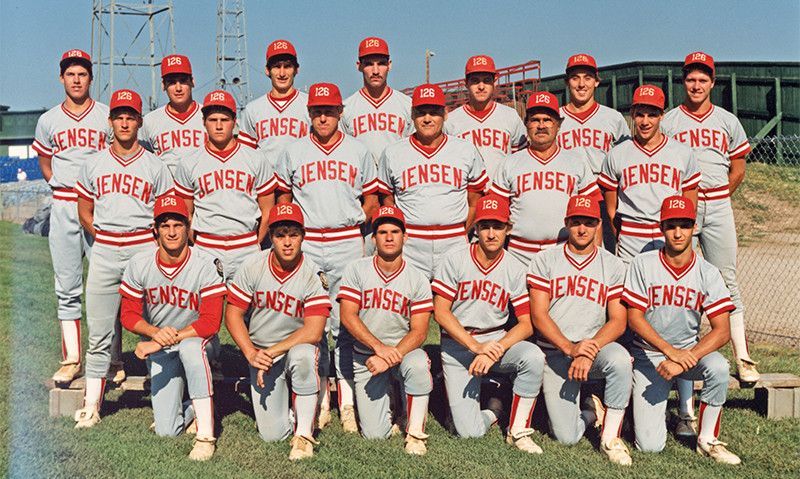 Since the American Legion World Series became an eight-team event in 1960, only 16 teams have gone unbeaten on their way to a title.

In 1986, Jensen Beach, Fla., did just that in addition to going unbeaten in the regional and state tournament competition that preceded that year’s ALWS in Rapid City, S.D.

Post 126 closed that championship season with 19 straight victories on a team that was coached by a former major leaguer, produced two future major leaguers and an eventual College World Series-winning head coach.

“It’s an unbelievable thing,” Shaw told the Sun-Sentinel in September 1986 upon his team’s return to the Palm Beach International Airport after winning its title. “You have to consider this team lost only one game in postseason play. They won 20 out of 21 games. They got better and better. They outdid what I thought they could do.”

Eventual college and pro standout Joe Grahe was the team’s star, taking George Rulon American Legion Baseball Player of the Year honors after hitting .390 on the season with a 17-3 pitching record and 0.56 ERA.

Grahe had a 7-0 postseason pitching record, including 4-0 with one save and 52 strikeouts in 35 2-3 innings during regional and ALWS competition while hitting .436. He was 2-0 in the ALWS, striking out 18 in the 9-2 victory over New London, Conn., in the opener and striking out 13 in an 8-2 championship game victory over Las Vegas, Nev.

“I never thought something like this would happen,” Grahe told the Sun-Sentinel in September 1986. “I just kept working hard and pushing. My arm was getting tired in the World Series and I didn’t have my best stuff, but I mixed up my pitches well. I’m only going to have about 10 hours before I have to go to UM.”

At the University of Miami, Grahe helped the Hurricanes to College World Series appearances in 1988 and 1989 before spending seven years in the major leagues after being a second-round draft pick of the California (now Los Angeles) Angels in 1989.

Another pitcher, Rusty Meacham, actually had a longer major league career than Grahe. Meacham, a 33rd-round draft pick of the Detroit Tigers in 1987, went 23-17 with nine saves and a 4.43 ERA in 281 appearances (nine starts) during eight seasons.

Meacham went 5-0 in the postseason, including throwing a five-hitter in a 6-0 win over El Segundo, Calif., in the ALWS.

“Bob told us before the season we had the potential to be national champions,” Meacham told the Sun-Sentinel in September 1986. “Nobody paid much attention then, but here we are world champions. It’s a great feeling.”

Shaw’s influence on that team can be felt today if you listen to current University of Florida head baseball Kevin O’Sullivan.

O’Sullivan became an All-ACC catcher at Virginia before starting a coaching career in 1992 at Florida Community College that also took him to Florida Atlantic, Virginia, the Minnesota Twins organization and Clemson before he became Florida’s head coach in 2008.

“That was my first experience in terms of someone guiding me in the right direction,” O’Sullivan told the Gainesville Sun in February 2008. “He’s still someone I lean on today.”

“It was unusual because there aren’t that many true students of the game,” Shaw told the Gainesville Sun in February 2008. “He was very determined, serious and a hard-worker. A kind of a student of the game. He asked a ton of questions.”

He went 1-1 for the White Sox in the 1959 World Series, taking a 1-0 victory over future Hall of Famer Sandy Koufax in Game 5 of a series won four games to two by the Los Angeles Dodgers. He also was a 1962 National League All-Star.

After retiring from baseball, Shaw coached in the Dodgers organization and spent two seasons as a pitching coach with the Milwaukee Brewers before becoming a co-owner of Shaw Sowden Realty and Management Properties in Florida while also coaching the Post 126 baseball team.

In addition to Grahe and Meacham, three other Jensen Beach players played professionally after helping Post 126 to the ALWS title.

Jon Anderson, who hit .476 with three home runs and nine RBI to win 1986 Regional MVP honors, spent one year in the minors after playing two seasons each for Indian River Community College and Georgia Tech. He was twice drafted by the California Angels — in the 44th round in 1988 and in the 48th round in 1989.

Dan Furmanik, a fourth-round selection of the New York Mets, spent three seasons in the minors after playing at Palm Beach Community College.

And Brian Reimsnyder, a 47th-round selection of the New York Yankees, spent one year in the minors after playing at the University of Florida.

Jensen’s Beach’s 1986 tournament dominance began after a loss to Lake Worth, Fla., in the district tournament.

Post 126 would then beat Lake Worth twice to win the district, sweep Pompano, Fla., for the Southeastern Florida area title and take four straight victories to win the Florida state tournament.

The importance of the title wasn’t lost on Grahe when he talked to the Sun-Sentinel on the eve of his Miami debut in February 1987.