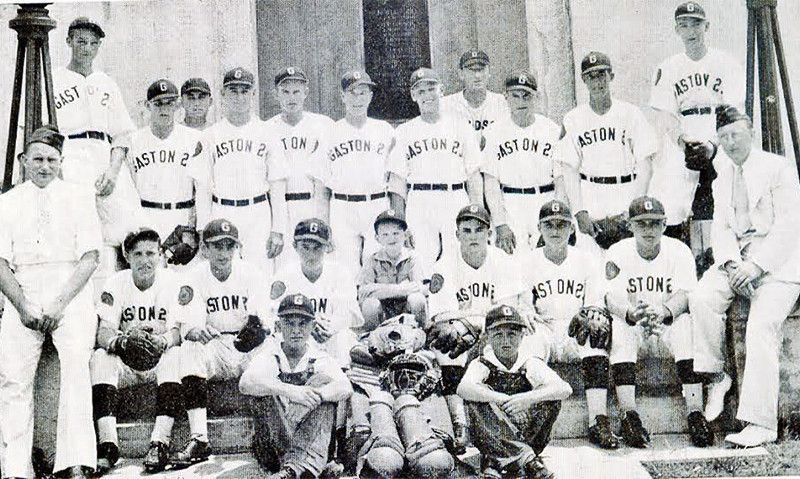 It also had a roster that included a player who more than 50 years later would become a Hollywood icon in shortstop Lawrence “Crash” Davis.

Davis was in his first of two seasons playing American Legion Baseball in 1935. He played shortstop and gained the nickname “Crash” during the season due to a collision he had with one of his outfielders.

He also had “Little,” “Squeaky,” and “Dynamite” as nicknames. By the time of the 1935 ALWS, “Crash” was common enough that he signed his name that way on a commemorative baseball signed by both teams at the pre-tournament banquet.

But the name became immortalized once film director Ron Shelton discovered it while writing the 1988 movie “Bull Durham.”

In the movie, a veteran catcher of that name played by Kevin Costner co-starred with a rising star pitcher named Ebby Calvin “Nuke” LaLoosh (played by Tim Robbins) and the real Crash Davis spent the last 13 years of his life enjoying new-found celebrity.

Lawrence “Crash” Davis, who died in August 2001 in Greensboro at 82, gave Shelton permission to use his name in Bull Durham. And six years later, he portrayed Baseball Hall of Famer Sam Crawford in Shelton’s 1994 film “Cobb” on the life of Hall of Famer Ty Cobb.

In 1935, Davis began the American Legion Baseball season a 15-year-old — he turned 16 in July — and while Gastonia’s population was 21,000, interest in the event was extraordinary following Post 23’s fourth state title in six years.

In the finale, the teams were tied at 8 until Post 23 scored four times in the bottom of the eighth inning as Hubert Mauney and Marion Dellinger singled and Bill “Tubby” Hand doubled to spark the rally.

“I’ve had a lot of thrills in my life,” Davis told the Gaston Gazette in 1995. “But playing for that Gastonia team was number one.”

On the 1935 team, Davis was one of the youngest players on the team and he helped Gastonia go 38-3 overall with two of those losses to a local semipro textile mill team. The only loss to an American Legion Baseball team came against Asheboro in Game 2 of a best-of-five state semifinal series won three games to one by Gastonia.

“I was always a chatterbox, so long before I was ‘Crash,’ I was called ‘Squeaky,’” said Davis, who eventually played baseball at Duke University and in the major leagues before returning to Gastonia as a high school and American Legion Baseball coach. “I was still young. So when I yelled, ‘Attaboy Sokie,’ my voice would sort of crack.

“I become pretty famous for that.”

After playing at Duke, Davis signed a free agent contract with the old Philadelphia Athletics and broke in as a major leaguer in 1940. After two more seasons in Philadelphia, Davis’s career was interrupted by military service in the Navy before he played seven more seasons of professional baseball — all in the minor leagues — from 1946 to 1952.

And, yes, one of those seasons came as a member of the Durham Bulls in 1948.

Cole played for six years; he was player-manager for the Spokane Indians when he and seven teammates perished in a June 24, 1946, bus accident on the Snoqualmie Pass near North Bend, Wash.

While Davis, who left coaching for a job at Burlington Industries in 1955, was easily the most famous participant in the 1935 ALWS, both teams’ head coaches devoted their lives to athletics.

Gastonia head coach Sol Williams “Doc” Newton had pitched 11 seasons in the minor leagues — including four seasons for the old Baltimore Orioles of the International League — after playing one season at the University of South Carolina in 1916.

In 1935, he was head football coach at Davidson and only two years away from a seven-year tenure at N.C. State.

Interestingly, in an Aug. 2, 1935 column in The Sacramento Union newspaper, sports editor Steve George called for more experienced coaches in the area to take over from Avila.

The “Legion boys are in dire need of proper coaching,” wrote George, who also decried the team’s “numerous (defensive) mistakes.”

Avila, who died in 1987 at 75, was an American Legion Baseball head coach for seven seasons, guiding two teams to California state titles and earning induction into that state’s Legion Baseball Hall of Fame.

The Phillies awarded Avila a 1980 World Series championship ring for his services.

After Gastonia hosted the 1935 ALWS, North Carolina hosted the event in 1940 when hometown Albemarle Post 76 won the title and in 1945 when Shelby Post 82 won the championship at Charlotte’s old Griffith Park.

Shelby was the next North Carolina city to host an ALWS in 2008 and has been the permanent home of the event since 2011.