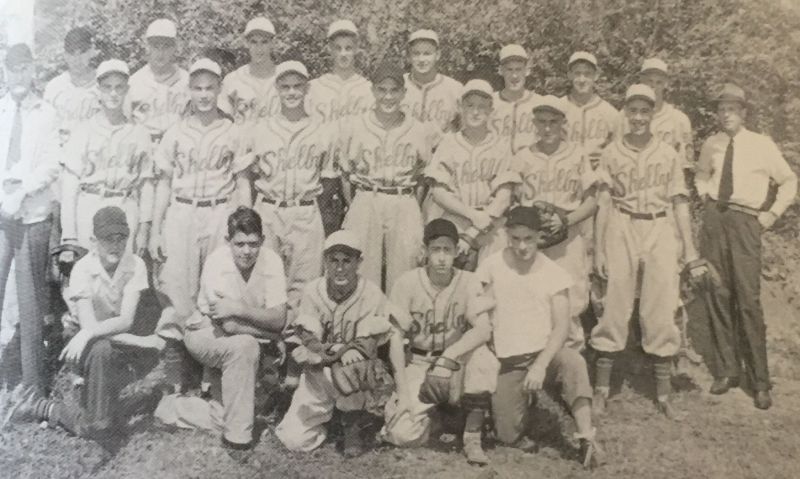 Before Shelby, N.C., hosted the American Legion World Series in 2008 and later became the permanent host of the event, the last North Carolina city to host the ALWS was Charlotte.

Ironically, Shelby’s Post 82 team won the event for the city’s only national title of any kind.

And it came in 1945 when the country was taking a deep sigh of relief about the end of World War II when the ALWS was staged in front of large crowds at Griffith Park.

Nearly five months after Germany had surrendered and two weeks after Japan had surrendered to end the war, 41,250 fans filled the stadium over four days from Aug. 28 to Sept. 1.

At the time, Shelby’s total population was approximately 14,000.

Since so many fans came to Charlotte to see Post 82 games, Shelby coaches B.E. “Pop” Simmons and Lloyd Little cracked jokes about the town they’d left behind.

“I doubt if there are enough people left in Shelby to put out a fire,” Simmons said.

Little added: “I doubt there are enough people left to start the fire.”

Griffith Park had opened in 1941 as home to the minor league Charlotte Hornets and remained open in the Dilworth section of Charlotte until 1987.

Shelby was making its first and only appearance in the ALWS. Post 82 had fielded teams since 1931 and had won a state title in 1942 and finished as state runner-up to eventual ALWS runner-up Albemarle in 1944.

Shelby also was in its fourth season under Simmons, and it caught fire in the 1945 playoffs.

Post 82 went 16-1 in postseason play, losing only to Charlotte Post 9 in the second game of a 3-1 best-of-five Western N.C. finals series victory. Shelby then swept Laurinburg for the state title, went 3-0 in a regional in Sumter, S.C., 3-0 in a sectional in Charleston, S.C., and 3-0 in the ALWS in Charlotte.

“Looking back, it was a once-in-a-lifetime experience for all of us,” Post 82 player Bill Weaver told The Shelby Star in 1995.

In the summer of 1945, each of those three and many others came up big for Shelby during its title-winning season.

Only Charlotte (four times), Forest City and Gastonia would beat Shelby in a season in which Post 82 went 36-6 overall.

After winning the state title, Shelby beat teams from Norfolk, Va., and Woodruff, S.C., in the regional and teams from Meridian, Miss. and East Chicago, Ind., to win in the sectional.

With no television in the area and little radio coverage, local fans frequently crowded around The Shelby Daily Star offices to get reports on games that were covered by that summer by the newspaper’s first female sports reporter, Catherine Bailey.

Community pride was at its apex when the team reached the ALWS.

Oak Park, Ill., was the only team with a future major leaguer in pitcher-centerfielder Herb Adams, while Tucson, Ariz., and Trenton, N.J., each had four future professional players and Shelby three.

Oak Park’s Adams would play three years in the majors with the Chicago White Sox (1948-50) and 11 years in the minors before retiring from baseball after the 1959 season.

Among those in attendance at the 1945 ALWS was major league baseball commissioner Benjamin “Happy” Chandler, Sr.

Each of Shelby’s three victories came in dramatic fashion.

Facing eventual 10-year minor leaguer Joe Tully, Hutchins’ two-out single drove in Washburn for the winning run in the bottom of the ninth inning in the opener. McKee threw a six-hitter and struck out six.

The next day, Cheek’s one-out RBI single drove in Bowen in the top of the 10th inning. Bowen who had opened the rally with a one-out double and Kent closed the win by retiring three of five batters in the bottom of the inning to wrap up a one-hitter with four strikeouts.

Two day later in the championship game, Shelby scored two runs in top of the seventh and eighth innings to overcome a 2-0 deficit to win 4-2. Five Trenton errors paved the way for Shelby runs.

McKee did the rest with a four-hitter with nine strikeouts. He also wriggled out of a bases-loaded, none-out jam in the bottom of the ninth on an infield pop-up, a shallow fly ball and a shoestring grab by centerfielder Bowen.

“... Shelby will long remember the American Legion Junior World Series of 1945 and the boys who played all the games ... will long be heroes to this southern town.”