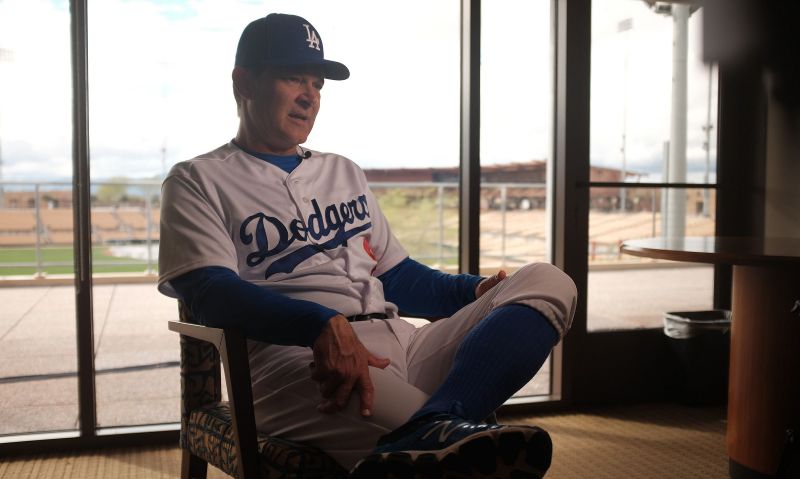 Don Mattingly, then-manager for the Los Angeles Dodgers, talks about his experience with American Legion Baseball as he is interviewed during spring training in Phoenix, Ariz., on Monday, March 2, 2015. Photo by Lucas Carter/The American Legion.

Griese is best remembered for being the quarterback who clinched the Miami Dolphins’ unprecedented unbeaten season in the 1973 Super Bowl and Mattingly was a New York Yankees star player so tied to baseball that his nickname is “Donnie Baseball.”

The two are considered some of the best athletes ever to come out of Evansville, Ind., a city of nearly 120,000 in the southwestern tip of the state.

The city also produced one American Legion World Series participant — and it was the football player who helped lead the way while playing alongside another Mattingly.

There, Griese and Jerry Mattingly — also Rex Mundi High teammates — were standouts on a team that won twice and lost twice to finish fourth in the eight-team tournament.

Griese and Don Mattingly, who attended Reitz Memorial High School, were again fixtures at a January 2019 Night of Memories youth fundraiser in Evansville.

Don Mattingly told the Evansville Courier Press that Griese had given him hope that he might reach his professional dreams.

“Bob ... was the guy for me who opened up my mind to a belief that if someone who was from Evansville could make it, in your mind you say it is possible,” Don Mattingly said.

Paul Gries, vice president of the Tri-State Hot Stove League, said Griese and Don Mattingly have helped raise nearly $2 million for Evansville charities even as neither has lived in their hometown for many years.

Griese’s father Sylverious “Slick” Griese, died when Bob was 10. And Bob Griese has frequently made a point to credit his youth coaches and coaches at Mundi High for being father figures for him.

“My mother did a great job of supporting us,” Griese told the Evansville Courier Press. “When dad was alive, my brother (Bill) and I had the latest equipment. The latest basketball or football. We had the newest bats, cleats and uniforms. Then the Little League coach took over after my dad died, my high school coaches and really the whole city of Evansville.”

“He (Don Mattingly) would tag along,” Griese told the Evansville Courier Press. “We would use him as second base or shag balls in the outfield. He was just happy being with his brother and the older guys.”

Shortly after the 1963 ALWS, Griese began a three-sport career at Purdue University.

He was a football quarterback, a basketball guard and baseball pitcher. His final college football game came in a 14-13 victory over Southern California in the 1967 Rose Bowl — the Boilermakers’ first appearance in that prestigious contest.

The fourth overall pick of the 1967 NFL Draft, Griese played 14 years for the Miami Dolphins. He was a six-time Pro Bowler, the 1971 NFL MVP and a two-time Super Bowl champion under legendary coach Don Shula.

Don Mattingly, who helped Evansville Post 8 to the 1976 Indiana state American Legion Baseball tournament, batted and threw left-handed during his professional career but was ambidextrous as a Little League baseball player who played second base on a 1973 Little League championship team.

The Yankees chose Mattingly in the 19th round of the 1979 major league draft and he quickly climbed through that franchise’s minor league system.

Among his stops was Greensboro of the Class A South Atlantic League in 1980. He was an all-star outfielder for the Greensboro Hornets and played games against the Shelby Pirates at Veterans Field, which has been the permanent home of ALWS since 2011.

Mattingly made his major league debut in 1982 as a slugging first baseman and played his entire 14-year career with the Yankees during which time he was a nine-time Gold Glove winner, a six-time All-Star, three-time Silver Slugger winner, 1984 American League batting champion and 1985 American League MVP.

He then began a longtime major league coaching career, starting with assistant coaching stints with the Yankees and Los Angeles Dodgers before becoming the Dodgers and Miami Marlins manager.

During the 2019 charity event in Evansville, Griese praised the city’s sports facility improvements.

“Evansville should be proud of what they’ve done in youth baseball, basketball and football for the city,” Griese told the newspaper.

Another change in town was enacted in 2015 when the road separating Garvin Park from Bosse Field was renamed Bob Griese Pass, which intersects with Don Mattingly Way.

Mattingly, then the manager of the Los Angeles Dodgers, reflected on his American Legion Baseball experience with the Legion’s Media & Communications Division in 2015; watch the video here.