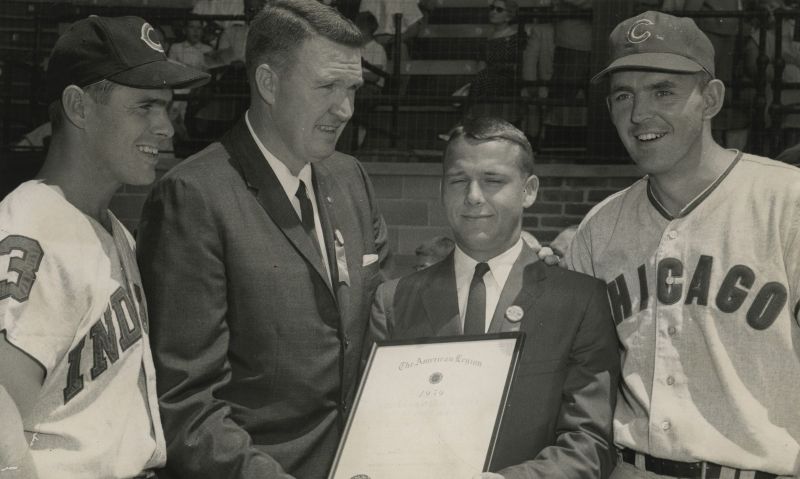 Fred Bowen Jr., the American Legion Baseball Player of the Year in 1959, was one of the distinguished guests at the annual Baseball Hall of Fame ceremonies held at Cooperstown, N.Y., June 27, 1960. He played shortstop on the  team sponsored by Thomas A. Edison Post No. 187, which captured the 1959 American Legion World Series. Bowen is pictured receiving a citation from Lou Brissie, commissioner of American Legion Junior Baseball. Looking on is Woody Held, Cleveland Indian shortstop, and Frank Thomas, Chicago Cubs outfielder-third baseman. Photo by Hollis Studio, Cooperstown, NY.

When Midland (Mich.) Post 165 was starting its postseason run that ended in a 2009 American Legion World Series title, its players and coaches met members of the Detroit Edison Post 187 team that won the 1959 ALWS title, forging a connection between title teams 50 years apart.

“In our 2009 state tournament, they honored the ‘59 team and we sat with them at a banquet and everything,” said current Midland head coach Dan Cronkright, who was a Post 165 assistant in 2009. “And they told us, ‘This is our year. You were there last year.’

“And we were in Shelby (N.C.) in ‘08. I think we lost maybe four or five kids from ‘08 to ‘09 and hardly any of them were starters. So we returned basically our entire starting lineup. And, boy, they had an attitude in ‘09. We were a little big eyed in Shelby, thinking, ‘Wow, this is a national tournament.’ The next year it was a little more business-like and we got after things.”

Midland’s 2009 title run included adopting a “softball concept” that spurred them on to the 2009 ALWS in Fargo, N.D.

Post 165 would go 1-2 and finish sixth in the 2008 ALWS played in Shelby before a veteran team advanced through the Michigan state tournament, Great Lakes Regional and ALWS in 2009 to win the state’s second championship.

After defeating perennial power Blissfield 9-2 in the state title game, Midland moved to the Great Lakes Regional in Appleton, Wis., where it lost its second game before rolling to the regional title.

And that came after Midland adopted a confident pregame strategy.

“We always wanted to be the home team because we got to bat last,” Dan Cronkright said. “Well, (head coach) Steve (Cronkright) and I got together and said, ‘To heck with that. We want to bat first.’

“So in the next game in the loser’s bracket, we volunteered to be visitors — and we did that all the way through the World Series and never lost another game.”

It’s a tactic hard-hitting recreation softball teams have adopted over the years, but it paid dividends for Midland in 2009 as the team frequently scored in the first inning and rolled to nine straight victories by a cumulative score of 91-45; Post 165 outscored its last four regional opponents 47-15 and outscored its five ALWS opponents 44-30, including 11-4 over Medford, Ore., in the championship game.

“It was just a mindset,” said Dan Cronkright, the third of three brothers to coach Midland since 1981. “We scored three runs in the first inning of the (ALWS) title game and sort of made a statement.”

The team, which was inducted into the 2012 Midland County Sports Hall of Fame, was also honored before Game 1 of the 2009 Major League World Series at Yankee Stadium when then-first lady Michelle Obama threw out the ceremonial first pitch.

Seventeen members of the team would participate in athletics in college, with two of them playing at Central Michigan well enough to be drafted by the Detroit Tigers — 2009 ALWS MVP Jordan Dean and Ryan Longstreth.

In the days when teams had to win their state title, then win a four-team regional, a three-team sectional and four-team ALWS, Edison went 10-3 in national tournament action to win Michigan’s first championship.

In a sign of the times, Detroit’s team experienced other “firsts” as well — a first time riding a train, a first time flying on an airplane and first time eating in a hotel.

Head coach Art Kohn guided Edison to a 3-1 record in Region 7 in Princeton, Ind., to advance to the sectionals in Bloomington, Ill.

In the ALWS at Hastings, Neb., Detroit went 4-1 with four straight victories after a 4-3 opening game loss to West Hartford, Conn. In the championship game, Post 187 defeated Hampton, Va., 11-4.

A key to the titles came from Kohn’s nephew Billy Pierce, a seven-time Major League All-Star who was in the midst of the Chicago White Sox 1959 American League title. A Detroit-area native, Pierce traveled from Chicago to his hometown to give Edison players “chalk talks.”

Post 187 shortstop Fred Bowen, who was named American Legion Player of the Year, also went on a press tour after the team’s victory. He appeared on “The Today Show” and did a sit-down interview with Detroit Tigers’ all-time great Ty Cobb, who was living out the final years of his life.

“At that time, (Cobb) was already in a wheel chair because of his diabetes,” Bowen said in 2009. “He was having a good day and I most remember him just repeating, ‘Do you want me to sign another ball kid?’ He kept calling me kid.”

Bowen also received the outstanding player trophy from Chicago Cubs shortstop Ernie Banks at the National Baseball Museum and Hall of Fame in Cooperstown, N.Y. Bowen went on to get a baseball scholarship at the University of Detroit.