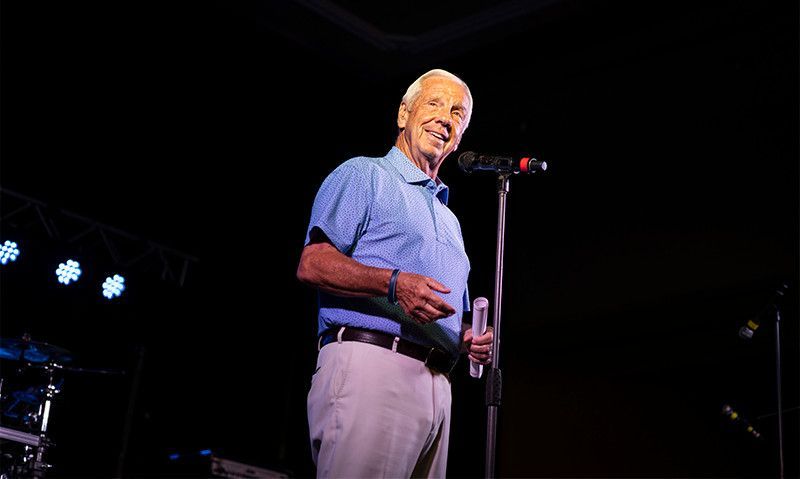 Roy Williams’ three favorite athletes of all time share something in common — and it’s not that two of them played basketball at the University of North Carolina.

No, it’s the drive and focus exemplified by Michael Jordan, Tiger Woods and Tyler Hansbrough that appealed to Williams, the Hall of Fame basketball coach who coached Jordan as an assistant under Dean Smith and later coached Hansbrough as the Tar Heels’ head coach.

Williams shared stories about the three athletes as the guest speaker at Wednesday’s Host City Welcome in Shelby, N.C., on the eve of the 95th American Legion World Series. The annual event gathers the eight teams with the staff and volunteers who make the ALWS happen.

Williams shared a story about Jordan’s drive to be the best, recalling how Jordan, when challenged by Williams, told the coach no one would ever outwork him.

“He’s the only player in my life in any sport that could turn it on and turn it off. And he never turned it off, never,” Williams said. “…If you want to be great, you have to work harder than anybody else.”

That drive to work harder than anybody else was also a trait of Woods, Williams said, as he shared a story about the famed golfer practicing one-handed putting to improve.

The coach also talked about his annual encouragement to Hansbrough to leave college early for the NBA, and Hansbrough’s determination to stay and win a national championship. The title came in his senior season in 2009 — a year after Hansbrough swept the national player of the year awards as a junior.

And he stressed to the players the lessons they could carry from those stories.

“Be all in. Be all in. Give it every single thing you possibly have. Don’t sell yourself short. Don’t cheat yourself. Don’t come back and say, ‘Gosh, when I was 18 in Shelby, if I’d just done a little bit more.’ Don’t use that,” he said.

Williams also encouraged the coaches of the ALWS teams.

“I love people, but I really love coaches. They’re my heroes. So you guys coaching here, you’re my heroes regardless,” he said.

“Yes, he’s a Hall of Famer … but every time I call, Roy Williams picks up the phone,” Chad Holbrook said, adding that Williams is his favorite coach.

Wednesday’s event also included special presentations to the families of two key supporters of the ALWS coming to Shelby. Linda Horn, widow of the late ALWS co-chairman Jim Horn, received a replica of a painting depicting Warbirds flying over players at Keeter Stadium. And Betty Carrigan, widow of supporter Charlie Carrigan, received a portrait of the stadium’s renovated scoreboard, renamed for the Carrigans.