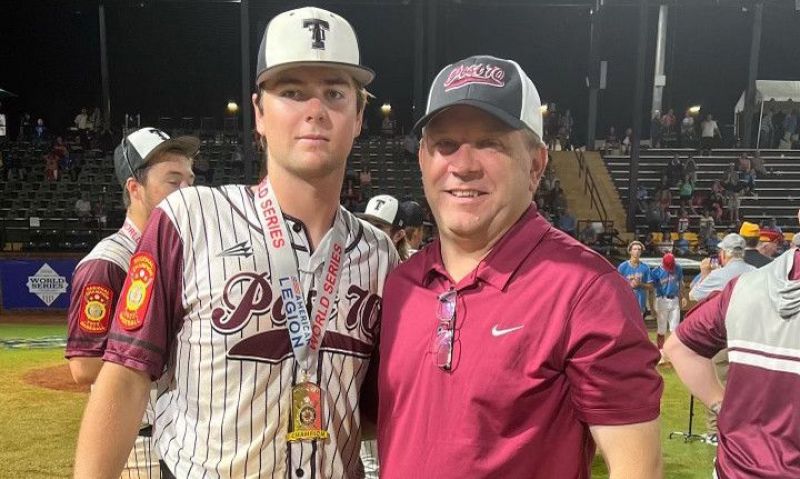 When John Rushing played and coached American Legion Baseball, he had as close a reminder as anyone could have that winning an American Legion World Series title could happen in his home state.

After all, it was his father Johnny Rushing’s pitching exploits that had given Tuscaloosa Post 34 the only ALWS title in Alabama history in 1967.

Yet, until one of the most dramatic title runs in ALWS history last August, John Rushing had either personally been a part of or seen one heartbreak after another for teams in his state.

After Tuscaloosa had finished runner-up in the 1966 ALWS and champion in the 1967 ALWS, only two teams from Alabama had advanced to the ALWS — Dothan finished third in 2002 and eighth in 2005 — before Troy Post 70 qualified for the 2022 event.

“Having gone through the heartbreak of getting far in the playoffs and suffering through the stories I always heard about the World Series, it meant a lot to me to see them win it,” Rushing said of watching two of his former assistants, Post 70 head coach Ross Hixon and assistant coach Rush Hixon, get the title in the 2022 ALWS.

“The up and down emotions were incredible the whole week,” said Rushing, who coached Tuscaloosa to seven state titles and three regional championship game appearances and Troy to three state titles and one regional championship game appearance. “You go from tears in your eyes that it won’t happen to just absolute happiness that it’s finally happened after 55 years.

“It was just an incredible rush of emotions to go through that whole experience.”

Troy rallied from behind to win its last three ALWS games, starting with a 4-3 win over League City, Tex., to advance to the single-elimination semifinals. Post 70 then beat Midland, Mich., 5-3 in the semifinal and two-time defending champion Idaho Falls, Idaho, 6-5 in the championship game to win the title.

In the championship game, Idaho Falls led 5-0 before Troy scored three runs in the third and three in the seventh inning to secure the victory.

“The funny thing about that game is I didn’t really watch it,” Rushing said. “I was on the field before the game started, but when I went up to the stands, there wasn’t any place to sit. It was so packed that there was no place to sit.”

Eventually, Rushing and Patrick Kennedy, the assistant director of Alabama American Legion Baseball, found a seat not far from the Post 70 dugout.

“My words to Russ at the time were, ‘I’m coming down here to get us some runs,’” Rushing said. “I was just kidding actually but lo and behold it happened.

“Then the emotion really hit me. I was fully engaged in the game. You would’ve thought I was a dad in the stands the way I was yelling. And that comeback in top of the seventh there at the end was just incredible.

“Then they were just holding on for dear life there at the end. When there were two outs, Patrick, who was sitting next to me, said, ‘C’mon, let's go down to the field.’ I said, ‘Sit down. We’re not going anywhere. We took the lead when we were sitting here and we’re sitting here until the third out.’”

Rushing and many of the Alabama fans were then able to make it to field level of Veterans Field at Keeter Stadium for the post-game celebration. He took a picture with his longtime assistants in front of the scoreboard and took a picture with winning pitcher Pres Jeffcoat that he shared with his father, since Johnny Rushing and Jeffcoat are now the two winning pitchers of Alabama ALWS title-clinching games.