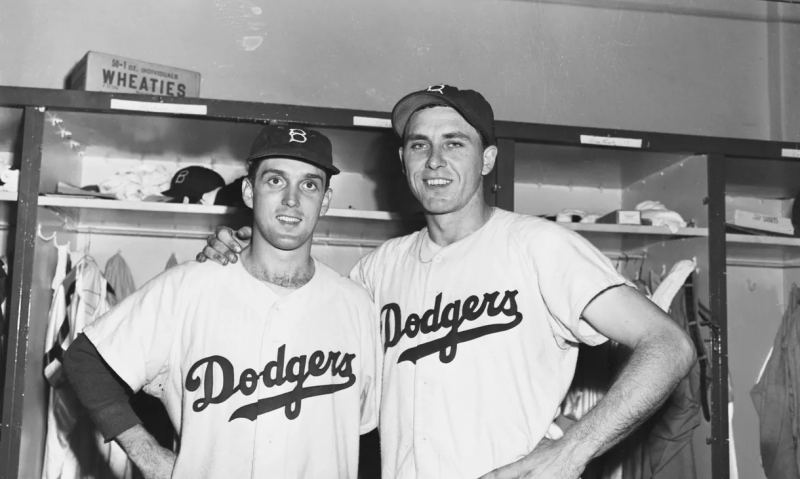 When baseball fans hear the term “The Boys of Summer,” it usually brings a smile to their faces as it is a popular 1972 book written about the 1940s and 1950s Brooklyn Dodgers by Roger Kahn.

The state of Indiana can take ownership of two of the most popular and historic members of that famous era in Major League Baseball in Gil Hodges and Carl Erskine.

Hodges, the first Dodgers player of that era to die in April 1972 at the age of 47, grew up in rural Petersburg, Ind., but played American Legion Baseball for Princeton Post 25.

Some 190 miles north of Princeton in Anderson, Ind., the last surviving member of those Dodgers’ teams, Carl Erskine, was a star for that town’s Post 127 and has lived there most of his life.

Hodges recently gained more acclaim last summer as he became the 83rd American Legion baseball product to be inducted into the National Baseball Hall of Fame in Cooperstown, N.Y. on July 24, 2022.

A star shortstop for Princeton Post 25 in 1941, that town’s Lafayette Park was renamed Gil Hodges Field in 2001. A four-sport star at rural Petersburg High School, Hodges had to travel 25 miles to play for Princeton.

Hodges was so unknown at the time that a July 1, 1941 story in The Princeton Daily Clarion called him “Gilbert Hodge” in a story noting the 15 players chosen to play for the local Legion team.

By the end of that summer, Princeton fans and others would become more and more familiar with “Gilbert Ray Hodges” as he hit .611 to lead Princeton to a 7-3 record to win the district title.

But in the single-elimination regional at Indianapolis, perennial power East Chicago knocked off Princeton, 11-4, even as Hodges went 2-for-3 with a double to lead the Post 25 offense.

So impressive was Hodges’ play that the Detroit Tigers made him a professional contract offer. Instead, Hodges chose to attend St. Joseph’s College some 225 miles north in Rensselaer where he was set to play football, basketball and baseball and earn a degree in hopes of becoming a coach.

After two years at St. Joseph’s, Hodges signed a contract with the Brooklyn Dodgers in the spring of 1943. A 6-foot-1, 200-pounder, Hodges played one game for the Dodgers. He came off the bench to play third base and batted three times with one walk and two strikeouts against the Cincinnati Reds.

For the next 2 1/2 years, Hodges didn’t play baseball as World War II raged. First entering the U.S. Marine Corps after participating in the Reserve Officers’ Training Program at St. Joseph’s, Hodges served in combat as an anti-aircraft gunner in the 16th Anti-Aircraft Artillery Battalion and participated in the battles of Tinian and Okinawa. For his efforts, he received a Bronze Star Medal with Combat “V” for heroism under fire.

After being discharged in 1946, Hodges’ career resumed with a stop to play for the Piedmont League Class B Newport News, Va., Dodgers. Hodges played catcher on a team where he was one of five future major leaguers, among them future longtime teammate Clem Labine and future TV and movie star Chuck Connors.

The next season, Hodges was promoted to the major league Brooklyn Dodgers and was a part of history as a backup catcher on a team with future Hall of Famer Jackie Robinson breaking the color line as the Dodgers won the National League championship.

Hodges played in 28 regular season games and one World Series game as the Dodgers lost a seven-game World Series to the New York Yankees.

The next season, Hodges switched positions and began his path to major league stardom. With Robinson moving from first base to second base and future Hall of Fame catcher Roy Campanella joining the team, Hodges moved to first base where he remained the Dodgers starter until 1961.

Hodges was a part of teams that won seven National League titles and World Series championships in 1955 and 1959.

Then, when the New York Mets expansion team was born in 1962, Hodges returned to New York when the Dodgers made him available in the expansion draft.

After 1 1/2 seasons and 65 games in two seasons, Hodges was traded by the Mets to the Washington Senators.

Hodges immediately announced his retirement as a player and became the Senators’ manager. But after 4 1/2 years as manager while guiding the Senators to a 321-444 record, no winning seasons and no first division finishes, Hodges made another return to New York.

As manager of a franchise that hadn’t won more than 66 games in a season, Hodges guided his first team in 1968 to a 73-89 record that still left the franchise ninth in the 10-team National League.

The next year, Hodges guided the “Miracle Mets” to a 100-62 record during one of the most improbable World Series runs in history. New York swept the Atlanta Braves three games to none in the first National Championship Series, then upset the 109-win Baltimore Orioles four games to one to win the title.

Hodges guided the Mets to back-to-back 83-win, third-place National League East Division finishes before he died of a heart attack just before the 1972 season at age 47.

First eligible for the Hall of Fame in 1969, Hodges fell short fell short of garnering enough votes for Cooperstown until he received 12 of 16 votes from the Golden Days Era committee to earn the 75 percent threshold needing for induction. His daughter Irene inducted him into the Hall of Fame last summer.

Erskine had a similar path as he also was as multi-sport star for Anderson High School.

A year after Hodges’ return to the franchise in 1947, Erskine made his major league debut with the Dodgers in 1948.

Like Hodges, Erskine helped his American Legion Baseball team to a district title as Post 127 won District 8 in the 1943 season before losing to eventual state champion East Chicago in the Northern Indiana finals; Erskine suffered a hard-luck 1-0 loss despite throwing a three-hitter with 14 strikeouts.

While the Dodgers were applauded for breaking the color line with Robinson’s signing in 1947, Erskine was part of an integrated high school basketball team and was good friends with Anderson High star “Jumpin’” Johnny Wilson, who would eventually play for the Harlem Globetrotters.

A 1945 high school graduate, Erskine was drafted into the U.S. Navy and stationed at the Boston Navy Yard. Erskine had already been contacted by the Dodgers organization and remained loyal to that organization despite being pursued by the Boston Braves.

Over the next 12 years, Erskine had a 122-78 pitching record, was a 1954 National League All-Star and pitched two no-hitters. He retired after the 1959 season and returned to Indiana.

He became a championship-winning baseball coach at Anderson College and guided the school to the 1965 NAIA World Series and eventually had 18 all-conference players, three All-Americans and one, John Bargfeldt, played three seasons in the Chicago Cubs organization.

After his youngest son Jimmy was born with Down Syndrome, Erskine and his wife Betty became active in the Special Olympics for more than 40 years.