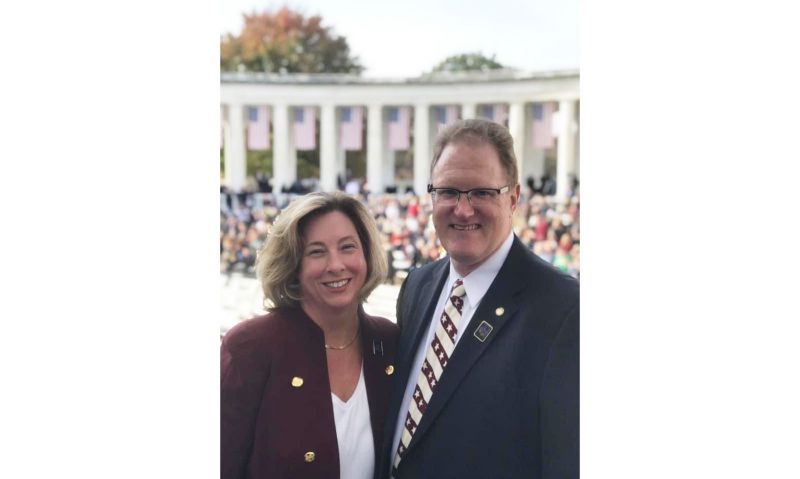 Board of Veterans’ Appeals (BVA) Chairman Cheryl Mason’s drive to make life better for the nation’s veterans has taken her to the top of the organization whose mission is conducting hearings and deciding appeals on benefits and services for veterans and their families.

Mason leads a team of approximately 1,200 personnel including veterans law judges, attorneys, and operations and administrative professionals as well as oversees resources and executes a budget in excess of $190 million. Mason is the first woman to be appointed Chairman of the Board.

“I spent my time on Fridays having a Shirley Temple at the American Legion hall with my mom and her friends and the veteran community was the one that really embraced us,” said Mason.

Tragically, Mason lost both her father and brother to suicide.

“I've lived through the impacts of suicide,” she said. “And I think it's so important that we tell people that we're there and we're listening, and we provide support as soon as possible and as quickly as possible.”

Today, Mason is a leading advocate in changing the culture surrounding mental health and bringing awareness to suicide prevention. She acts as an ambassador for PREVENTS — The President’s Roadmap to Empower Veterans and End a National Tragedy of Suicide — a Cabinet-level task force that is a result of an executive order signed in March 2020. The program focuses on a holistic public health approach to suicide prevention and changing the culture surrounding mental health and suicide prevention through “enhanced community integration, prioritized research activities, and implementation strategies that emphasize improved overall health and well-being.”

“Suicide is a national problem. It's a veterans’ problem. It's a military family problem. We have to come together as community and we're reaching out across the country in small communities and states to big organizations,” said Mason. “I know The American Legion has a strong voice in this area.”

If you or someone you know is experiencing thoughts of suicide or is in crisis, please contact the National Suicide Prevention Lifeline for confidential support 24 hours a day at (800) 273-8255. Veterans and servicemembers who need immediate help should call the 800 number and press 1 to reach the Veterans Crisis Line, or chat online at www.veteranscrisisline.net/get-help/chat or text 838255.

Mason has worked for the Department of Veterans Affairs (VA) for 25 years.

“(The board) was a natural fit because my undergraduate degree is in political science and psychology and my law degree on top of that. I started as a decision raising attorney and it really worked because I understood medical terminology and understood veteran service,” she said.

“We are here to serve veterans and help veterans,” she said. “That's where the department is focused and that’s what you see us doing. We’ve really committed to that.

“We're being innovative. We're thinking outside the box. We're working closely with our partners and our veterans service organizations. And that's part of what we need to do. It can't just be one organization. We have to do it together in a community,” she added.

Mason’s journey to lead the board wasn’t simple. When she and her husband moved to Germany, she had to resign her position at VA because there was no pathway to take the position with her or to find another.

“I applied for 200 positions in Germany and got turned down for every single one,” she said.

“It's frustrating because you're trying to support your family, support your military member and make sure that you're working on your career.”

Mason found herself in the same position that many military spouses find themselves in. The changes in duty stations made it difficult to build a stable career as well as advance within her field. Initially following her completion from law school, Mason struggled to find full-time employment as a lawyer in Nebraska.
“Trying to get a job in Omaha was pretty impossible because everybody, even though it was a big city, everybody knew in the small world of lawyers that I was a military spouse leaving,” she said. “At that time, the military spouse world didn't have the support that we have now.”

Department of Defense statistics show that military spouses face a 22% unemployment rate and a 26% wage gap compared to their civilian counterparts. During her time at BVA, Mason has made it one of her objectives to create an environment conducive to hiring military spouses by introducing remote work capabilities, implementing the military spouse hiring authority, and promoting that BVA is looking to hire military spouses.

“Veterans and military spouses bring an understanding to that world that others just don't just because you've lived it,” said Mason.

“The department now uses the military spouse hiring authority, very, very openly,” she added. “This is something that I'm just thrilled to see. And if I have a little something to do with it that, that’s my job is to make an impact and get things rolling.”

Since her appointment to chairman in December 2017, Mason has tackled the overwhelming backlog of legacy appeals, reducing the backlog of a staggering 472,000 cases.

“We were working on at that time pushing forward appeals modernization with our stakeholders to include American Legion, Hill staff and other VSOs,” she said. “Since that time, we have not only implemented the Appeals Modernization Act, but we're still working down those legacy cases.”

Over the past three years, BVA has increased decision output by 95% and breaking 100,000 cases last year alone. Currently, the board has approximately 119,000 legacy appeals. One of its objectives over the next year is to output decisions on another 93,000 cases.

One of the biggest changes to the way BVA operates has been a shift to more virtual hearings, which Mason says was one of her visions since she became chairman. BVA began testing the technology in fall 2019. They were planning to roll virtual hearing out in spring 2020 and then the COVID-19 pandemic hit.

“We knew we couldn't stop hearing operations. And we didn't, even though we had to suspend central and regional office hearings and trial boards due to COVID, we didn't have to stop the virtual,” she said.

The board was able to immediately transition to virtual hearings and when the president signed the VA Tele-Hearing Modernization Act in April 2020, they were able to go full push.

Mason understands that some veterans may be reticent about the new technology.

“We know that every time we schedule a virtual hearing, that is the veteran's first time. And we understand that, my team understands that, and we're standing by to work with them and help them through the process,” she said.