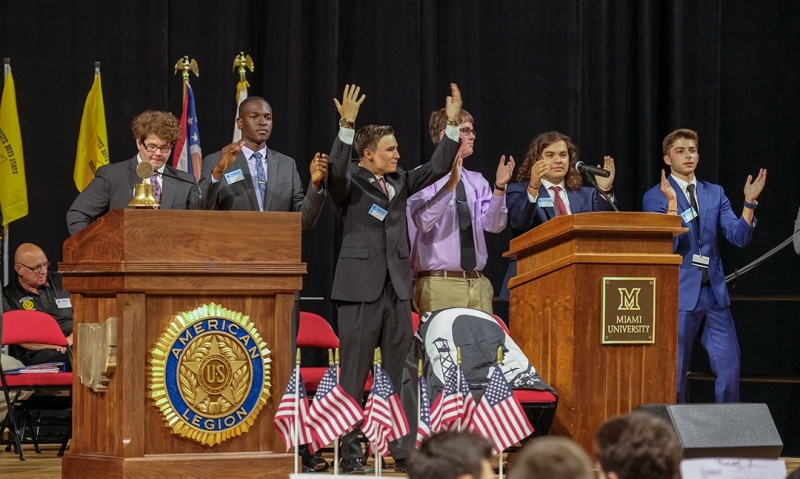 Members of the Nationalist Party rally their constituents during The American Legion of Ohio Buckeye Boys State “Meet the Candidates Rally” at Millett Arena, on the campus of Miami University in Oxford, Ohio, on June 13. (Photo by Sean Hughes)

“I’m very ambitious, so I wanted to go for the top,” said Tayese, of Washington Court House, Ohio, who was elected governor of Ohio’s Boys State earlier this month. “I also wanted to (run for governor) because I wanted to be in a position to help me be a better leader, learn how to galvanize men around me to follow me, and learn how to delegate, be a moderator, help everyone get at least a part of what they wanted.”

Tayese’s election made him governor of some 1,150 of his peers during the program at Miami University in Oxford, Ohio. Buckeye Boys State is annually the largest or one of the largest Boys State programs in terms of number of delegates.

“It’s due to the hard work of the Legionnaires, the counselors, they promote this program year-round,” Program Director Mike Kennedy said of the ability to continually draw such large participation. “When we walk out of here on Sunday, they’re already thinking about next year, they’re already talking about next year. You’ve got a lot of Legionnaires that go to the high schools, that promote the program. …

“It’s the fact that we have such a solid tradition of all these years of being able to do the program, do it right, and improve on it every year. There’s no suggestion that comes up that we don’t at least entertain and feel it out.”

Jerry White, the past program director, said the Legionnaires and other staff work hard all year to sell the program’s benefits.

But, he said, the best salesmen for Buckeye Boys State are the delegates themselves.

“We promote that during the week, that when you guys go back to your schools, now you’re part of the sales force of the program. Because your underclassmen are going to listen to you a lot differently than they listen to some Legionnaire walking through the door,” White said.

Tayese echoed that, noting the perception of the program he received from his peers.

“They were super thrilled to be here, and the positive compliments that came out, I’m like, man, this is something that I really have to do and I really have to be here,” Tayese said. “That was a huge thing, but also big was, a couple Legionnaires go to my church, and they really, really, wanted me to come here, and that was a big drive because I really love veterans, I love what they have done for this country, and in any way, shape or form, I would like to show my appreciation.”

The numbers don’t come without challenges, of course. The program needs to use two of Miami University’s dining halls to get all the students and some 125 staff members fed — “It’s working out, but it would be better if we had a big dining hall, filter them all through and get a little more camaraderie (in one place),” Kennedy said.

All told, the Buckeye Boys State program uses at least part of 15 buildings on campus, for residence halls, classrooms, mock government and other events. Tayese’s office as governor was set up in an unused dorm room on the second floor of a residence hall bustling with other delegates operating in their own legislative capacities.

And the sheer number of students and staff meant several events had to be held in the university’s basketball arena, Millett Hall.

Still, many of the logistical challenges that come with drawing 1100-1200 rising seniors have been fine-tuned. White noted that the registration procedure on the program’s first day can be completed in about an hour and a half.

“The kids get here, they’re immersed in the program within 20 minutes of being here,” White said.