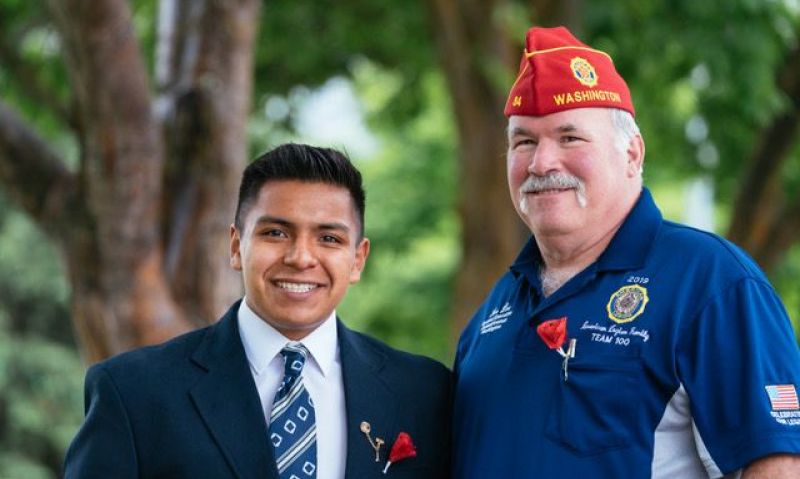 “When I showed up to EBS I knew that I was way out of my element,” Vasquez recently wrote in a letter to Department of Washington National Executive Committeeman Ken Lee. “Differing political views, not having a family member who has served, and being one of few Latinos, all accumulated to me wanting to go home. I questioned what I was doing there and whether I belonged.”

“When they get off the bus, everybody is wide-eyed and not sure where to go,” Lee explained. “He didn't know, but he already took charge on the bus. There were so many things that he took charge of, as people are going from place to place. He was already leading. There was no following.”

As the weeklong Boys State progressed, Vasquez gained confidence and followers. That led him to seek election, first for city council and then for governor.

“I was a little bit uncomfortable at first,” he recalled. “The first couple of days went on, and I'm like, ‘D'Andre, just know that you're going to learn a lot, you read up on this, there is going to be a great outcome at the end.’"

Vasquez was elected to city council but still hesitated for the next step.

“I knew that it was going to be a little bit uncomfortable, but I knew it was also going to be a growth opportunity to run for governor, and that's exactly what I did,” he said. “I filled out the application, but was kind of hoping my WiFi wasn't going to load when I was going to submit. But it didn't, and it launched me into my candidacy for governor, which I'm very, very grateful for.”

Vasquez won the governor‘s race. That experience has helped him in numerous ways as he works toward a career in government.

“We don't see eye-to-eye on all political issues,” he said. “That's how it is in the state of Washington and that's how it is across the nation. Being able to find common ground and being the liaison was a great experience.”

Vasquez credits Lee with making him feel comfortable at Boys State. “He was able to provide that little piece of home, that little piece of comfort. Just kind of the hierarchy of needs, right? You have to be comfortable first in order to reach this, in order to reach this next level. Mr. Lee was able to provide that sense of comfort, that sense of home for me to be able to focus on things like bringing both political parties together and passing legislation. Our first piece of legislation was with career technical education, which I hold very dear to my heart.”

“It’s fairly easy to spot the leaders in the group, the ones who you knew were going to be out front, the motivators,” he said. “D'Andre was all of that put together. He's just an inspiration and just a great overall gentleman. He treated everybody with so much respect.”

“We're always trying to teach, but we were being taught,” he said. “Congratulations to D'Andre for teaching us what we all should be doing throughout our lives. The encouragement he gives out, especially when he was taking charge as governor, people flocked to him. They were forming around him and the leadership that he inspired them to be, just true, top of the line. It's not what we've done, it's what he's done for us. He's built us, so we always give back and he's already doing that in numerous ways.”

Vasquez lives in Leavenworth in the Cascade Mountains.

“For him to inspire others, especially in a small community that he comes from, it’s amazing,” Lee said. “We look forward to the greatness that he's going to inspire to build on that.”

Already the Boys State experience is paying off for Vasquez. This spring he was elected executive president of DECA (Distributive Education Clubs of America). It’s a nonprofit business leadership organization with more than 222,000 members worldwide. DECA assists students who are interested in careers in marketing, management, hospitality, finance and entrepreneurship.

As president, Vasquez wants to broaden greater accessibility. “I've seen it prepare me with communication skills and those 21st century skills that employers are looking for when they're hiring,” he said. “I want others to gain that same experience.”

Vasquez credits DECA with helping him soon after he lost his parents in a fatal car accident in December 2015 when he was a freshman.

“I was kind of left a little hopeless,” he said, noting his school adviser encouraged him to join DECA. “I've been able to grow serving at the state level as the area 10 president, and now serving at this level. It's really opened up a lot of doors.”

After his one-year DECA presidency concludes, Vasquez will seek majors in marketing and political science. He is still determining what college he wants to attend. “Those two are going to work together because I enjoy a lot service, I enjoy a lot of advocating. I think that the marketing degree what allowed me to possibly work on the campaign, and that political science degree allowed me to have a deeper understanding on as to how politics works.”

Vasquez, whose older siblings are now his guardians, suggests others seek opportunities like Boys State.

“I'd encourage anyone to become involved, whether that is through Evergreen Boys State or in an organization like DECA,” he said. “We're all working together toward preparing the next generation. That will continue to be instrumental as we continue to grow and develop our leadership here locally in our communities, but also across this nation. I look forward to continuing to embody servant leadership through DECA and hopefully continue to grow the Evergreen Boys State program.”

Knowing how instrumental was in his development, Vasquez is thankful to Lee and others in the Evergreen Boys State program.

“Thank you to anyone who participated,” he said. “I'd like to thank anyone who took the time and who is continuing to take the time to be there and support those programs, all those veterans that contribute and donate their time. Often you don't see the impact that you're going to make immediately there. I think the impact that you are making, you're not only making a week-long investment into students that attend, you are making an investment in this country. You are making an investment in these students who will become our next generation leaders, our future politicians, our future doctors, the people that will guide the workforce.”

Vasquez will use his Evergreen Boys State scholarship toward higher education. But it’s the experience that he treasures.

“I really do think that this experience was fundamental to my development,” he said. “I think that maybe, what might be different is my mindset. Had I given up, I'd look back and think, ‘I should have finished that week off.’ Was it difficult? Yeah, but there's difficulty in anything. Evergreen Boys State really taught me that you are only moments away from reaching success. You could be just one risk away from reaching a new potential that you'd never thought you could achieve.”