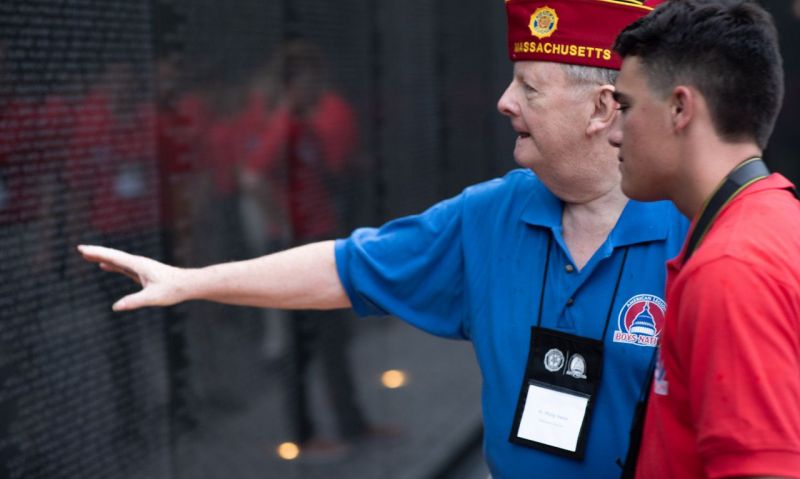 Before the delegates to American Legion Boys Nation joined him, National Chaplain Father Philip Salois had a moment to himself Sunday night at the Vietnam Veterans Memorial.

He reached out and ran his hand across the names of his fallen comrades — Terrance Bowell, Salois’ lieutenant in the war; and right below Bowell’s name, Herbert W. Klug, Salois’ squadmate who died trying to help Salois rescue Bowell and others from an ambush.

A Boys Nation senator joined Salois, then another, then more, a few asking questions about Salois’ friends and the others who gave their lives, their names memorialized along the wall.

“It puts everything into perspective. You really don’t understand how fortunate you are, (me) not being from a military family at all, and realizing what they have gone through, what the families have gone through,” said Ashrit Verma of New Jersey. “Especially with them just touching it, almost as if they’re able to see, maybe not physically, but some sort of spiritual embodiment of the fallen soldiers.

Sunday’s time at the Vietnam Veterans Memorial came hours after Salois shared the story of his Vietnam experience, and the loss of his comrades, during the annual Boys Nation memorial service.

“I know that they’re helping me every day to plod on, to keep going,” Salois said during the service at Marymount University in Arlington, Va., which hosts Boys Nation.

“Walking down there by yourself is nothing like walking by it with a veteran,” Rossignol said of the group’s visit to the Vietnam memorial. “You really see it from a whole entirely different angle, them pointing at the wall and seeing their friends, their neighbors, their classmates that died; you just realize the personal connection they have with people in this one location, and how many died all at the same time, same day, same month.”

Boys Nation will honor the fallen again on Monday, when Nebraska’s Evan Jolley and South Dakota's Isaac Buchholtz participate in a wreath laying at the Tomb of the Unknowns at Arlington National Cemetery.