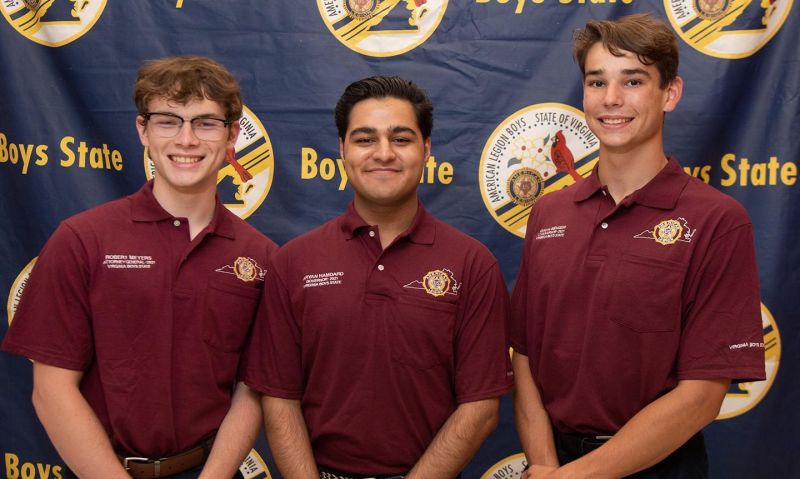 The summer of 2021 has been an overwhelming one for Aryan Hamdard.

In June, he became the first immigrant to be elected governor at Virginia Boys State. In August, he watched from afar as his homeland of Afghanistan fell to the Taliban.

“The recent unfortunate and tragic developments in my homeland, Afghanistan, have been extremely overwhelming and heartbreaking and has forced me to constantly think of that beautiful country and be worried about the stark future of millions of innocent Afghans who are once again faced with an uncertain future,” Hamdard said.

Growing up in Afghanistan, Hamdard had to change schools several times due to security threats against his father, who worked in IT for the Afghan government and with U.S. forces.

“In 2019, the security situation in Afghanistan deteriorated to a point where actually my dad’s colleagues and the U.S. government informed him about an imminent threat against our lives and advised us to leave Afghanistan and resettle in the U.S.,” Hamdard said.

Through the Special Immigration Visa (SIV) program, the Hamdards were able to relocate to the U.S. They moved here in November 2019; a few months later, they — like everyone else — had to adjust to life in a pandemic.

“We were in a new country with almost no experience with anything, locked inside our house and scared for our lives,” Hamdard said. “After we arrived here, I only went to school for a couple of days shy of a month and then we were virtual. Which was the craziest and most difficult year of my life ‘academics wise.’ Because I did not know how the educational system in the U.S. worked and I joined school towards the end of the school year.”

With guidance from his counselor, teachers and school, Hamdard was able to finish the 2019-20 school year with a 4.0 GPA. But the family needed to find a bigger house to accommodate virtual learning and a room for Hamdard, his younger brother and his parents. Unfortunately, the house they found was almost an hour away from Hamdard’s school.

“So every time we had an in-person meeting, I had to personally drive all the way over there because I didn't want to change schools anymore and I wanted to leave something behind for my current school before I graduate. So, during the school year that just ended, I created my own club to help new and international students with their integration to the American educational system and ways of life in high school. It is mostly run by students in order to improve their leadership skills and skills with people while helping others. But I will also help the new students with feeling more comfortable to make new friends and ask questions which they would not normally do with an adult counselor,” Hamdard said.

“I clearly remember hesitating when first applying to the program because I simply did not know much about it,” he said. “After I got nominated by my school and got selected as a primary delegate at our post, I had a lot of people tell me that this is going to be a life changing experience, but I didn't really believe it.”

Hamdard didn’t initially plan to run for office at Virginia Boys State. “But after I had a conversation with a few people from my group they suggested that I should really consider running for governor. … I was scared, but then I said to myself, if I really want to change something, I should at least give it a try,” he said.

“During the conventions, a lot of the delegates delivered humorous speeches and tried different tactics to charm the audience. I simply went there, introduced myself and told them about the importance of the position they are about to vote on and told them my goals. And even with my limited campaigning I won by unanimous popular votes,” Hamdard said.

In addition to being the first immigrant elected governor in Virginia Boys State’s 78-year history, Hamdard took pride in his city’s achievements. “We were the first ever city/group to not only win the best city award but also get all three of the major statewide offices, the senate pro tem, the senate minority leader, the chief justice of the supreme court, two color guard members and a Boys Nation Representative. We set new standards at Boys State and made history forever to come. On the last day I really did realize that it was truly a life changing experience, as I will never doubt my ability to do something after this.

“Now I really believe that I can make a difference and fight for our country, people and values. I am trying to get involved with more programs like these and eventually actual politics, because I think we all bear an equal responsibility to leave something better behind for the generations to come.”