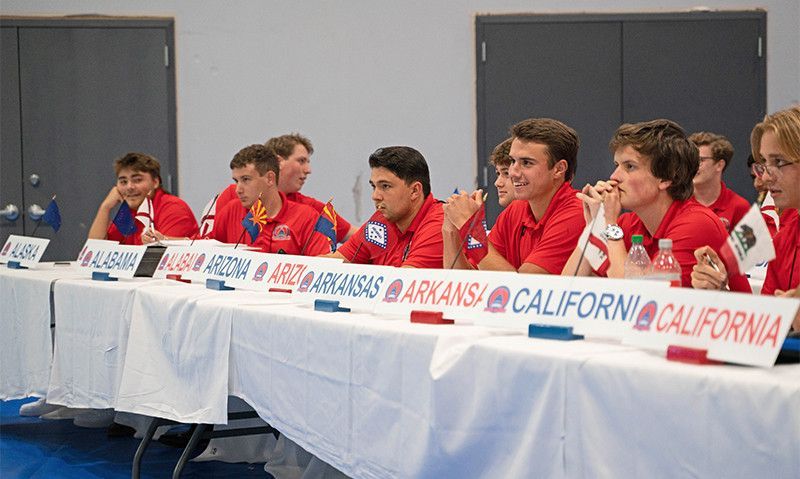 Amid visits to the National Mall and Arlington National Cemetery, and the elections of four officers, the American Legion Boys Nation Senate’s purpose is to consider the bills and resolutions each senator brings to the program with them.

Here’s one bill’s journey from the 2022 program:

Carter Gleason of Missouri presented the Financially Accountable Legislature Act (FALA) of 2022, with the intent of “ensuring a financially accountable, transparent and democratic Congress by limiting Congressional interaction with stock markets and corporations.”

Gleason’s bill noted that members of Congress in 2021 traded in excess of $330 million on U.S. stock exchanges, with current ethics rules allowing Congressmen “to buy and sell shares of companies whose share price will be affected by bills in front of committees that the Member of Congress sits on.”

The bill would mandate that no sitting Congressman could buy or sell securities on any U.S. stock exchange, or serve as an officer or member of any board for any for-profit corporation or association.

Once passed by committee, the bill came to the Boys Nation Senate floor on Tuesday.

“The stock market is the mechanism by which our representatives undermine our democracy. They make legislation to benefit certain companies and then buy stock in those companies to enrich their personal wealth,” Gleason said while discussing the bill on the Senate floor.

Supporters and opposers of the legislation had their chance to speak as well.

Gavin Bannister of Vermont opposed the bill because of the mandate preventing sitting Congressmen from serving on boards. “In my home state of Vermont, we have a lot of people that have small businesses, and also run for office, so my state in particular (could be at a disadvantage) because qualified candidates would not run for office,” he said.

Ultimately, the bill was passed by the Senate, 73-13, and awaits President Tamarus Darby’s signature.