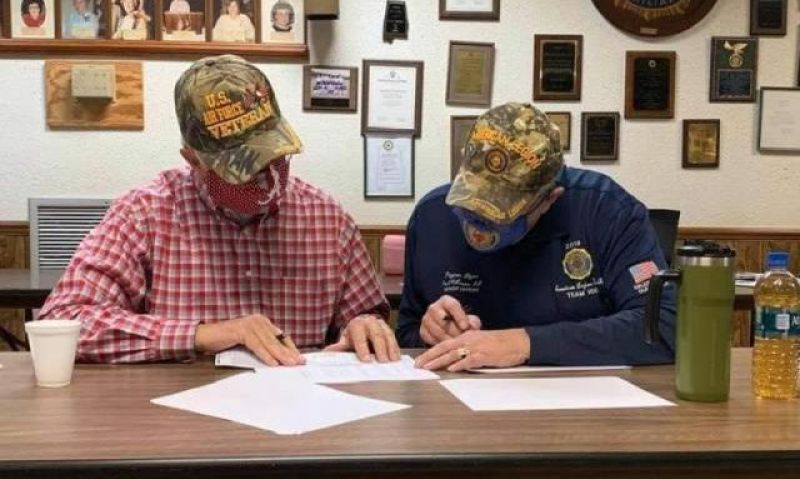 Quarantining, stay-at-home orders and social distancing during the COVID-19 pandemic left many Americans with feelings of loneliness. With aging Americans among the highest at risk, that left many older veterans also feeling isolated while trying to stay safe within the confines of their own homes.

Ryan Winslow American Legion Post 911 in Hoover, Ala., realized that early on, and has since made it a point to reach out to those needing a Buddy Check the most.

“We have 47 members who served during World War II and Korea,” Post 911 Commander Ginger Branson said via an article posted by Patricia A. Douglas, Post 911’s public affairs coordinator. “With the lockdown, we knew it would be vital to connect with our older members.”

That’s where Post 911 Second Vice Commander Larry Parks stepped up. Whether via a phone call or an in-person, socially distanced visit, Park has taken it upon himself to check up on the post’s older members.

Parks, himself an Army veteran stationed in Korea from 1960-1962, said coming from a military family – his father served in World War I, both his brothers served, and his son retired from the Marines – helped Parks develop a strong sense of commitment to other veterans.

Also having friends who have served, along with attending several veterans’ funerals, have made an impact on Parks. “I’ve had all that around me,” he said. “There are many number of reasons I just wanted to do this. It’s just something I felt that I needed to do.”

When Parks made a visit, he took with him a yard sign with “A Proud Veteran Lives Here” on it, along with the post name, The American Legion emblem and the logo of each of the five branches of the military. The Buddy Check recipient has the option to put the sign up on their yard; Parks has handed out more than 30 signs.

“A lot of times, they’re just grateful to be recognized for what they did,” Parks said. “It makes me feel good when I go by their house now and I still see that sign out there. I think it makes the happy to be recognized a little bit for the service they did for their country.”

Branson praised Parks for his efforts conducting the Buddy Checks. “Larry has really gone above and beyond with this project,” she said. “He has spent many hours personally visiting these veterans, which has made a big difference in their lives.”

There also have been four organized Buddy Checks to reach out to any members not previously contacted. “We have contacted everyone in the post who we haven’t heard from since the pandemic began,” Branson said. “We want to check on them to make sure their needs are met. We will never leave a brother or sister behind.”

The Buddy Checks extend beyond members. Each month, Post Service Officer Peyton Ligon reaches out to spouses of deceased Legionnaires, especially those recently widowed, to see if they need any assistance.

For Parks, those veterans he’s reached out to have earned the time it takes to check on them. “In my mind they’re great because of the sacrifices they’ve made,” he said. “I personally believe that anybody that was in the military should be recognized, because when they put on that uniform and go on active duty, they are going to be separated from their families at one time or another. They didn’t even know how long they were going to be gone. I think that’s a tremendous sacrifice.”