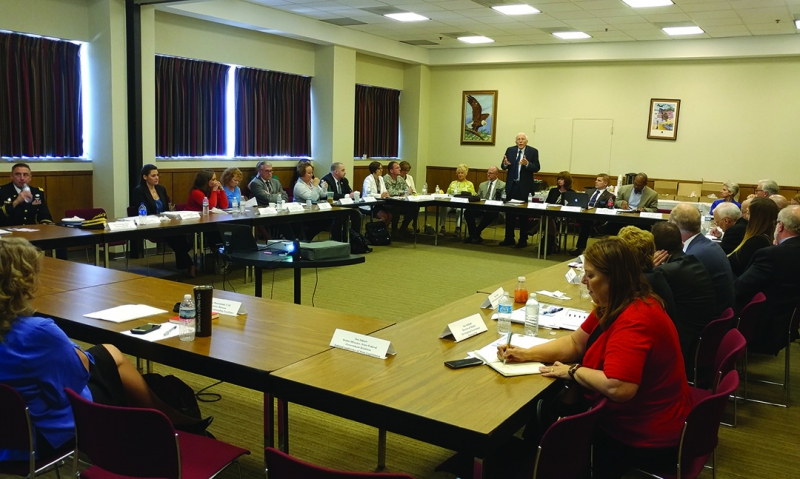 More than 30 guests filled the conference room at The American Legion's National Headquarters office in Washington, D.C., on June 28 for a roundtable discussion about health-care credentialing.

The American Legion National Veterans Employment and Education (VE&E) Division hosted a Military to Healthcare Credentialing Roundtable on June 28 to address employment challenges facing America’s servicemembers and veterans, as well as discuss strategies to meet their needs well into the 21st century.

The objective of the roundtable, held at the Legion’s Washington, D.C., office, was to support veterans’ employment initiatives by bringing together key stakeholders, senior leaders and policymakers, along with experts from the credentialing field in health and emergency medical services.

“This was the first roundtable where we really put a laser focus on a specific issue: emergency medical care,” American Legion Veterans Employment and Education Assistant Director John Kamin said. “Doing so allowed us to explore unique solutions, as well as track the life cycle, from advanced individual training to civilian job placement. There were several opportunities discovered as well as challenges, so it paid off to have a discussion.”

Lisa Lutz, president and co-founder of Solutions for Information Design, LLC, a company that specializes in research and analysis for social science policy, has worked with the Legion on credentialing since the 1990s. Some of the first research on how to alleviate barriers to servicemembers and veterans on credentialing has highlighted many complexities.

According to Lutz, credentialing is a relatively new form of establishing workplace competency. There are still some issues that have not been fully addressed, as very little research has been done on tracking the outcomes of credentialing both in the civilian and military sectors.

“For each of the military services, we have something called the COOL Program, which is Credentialing Opportunities On-Line Program,” said Lutz. “The idea is to encourage them to get that credential while they’re in the military so that when they ultimately transition out of the service, they’ll have that in hand. The credential serves as a way of documenting the fact that their military skills are on par with their civilian counterparts.”

For Lutz, the bottom line is that society really can’t afford to not recognize that training when individuals leave the military and want to join the civilian work force. She said The American Legion is uniquely positioned to bring together the right stakeholders as it continues to address the credentialing.

“Employers like to hire veterans, but they have a difficult time translating their military education and training and experience,” she said. “Most of all, what the services have hung their hat on in terms of promoting credentialing, is professionalization of the force.”

From radiology to dentistry and everything in between, Kamin said health care is one of the largest employment fields. In order to address the specific challenges that America’s servicemembers are currently facing, holistic strategies have to be identified to best suit their needs well into the 21st century.

“What was discovered in our roundtable is that there are intrinsic and technical skillsets that servicemembers have learned from the battlefield. This allows for more specialized positions in emergency medical care than what was previously the status quo,” Kamin said. “We’re also pleased to see the (Department of Veterans Affairs) invest in that idea by allowing it to be a springboard for other positions within the VA. The military is doing an extraordinary job consolidating its medical training. I think the challenge is getting the industry to catch up with them.”

Lutz said her hope is that each stakeholder group better understands what its role can be, and increase its awareness of how to implement best practices.

“This is really a wonderful venue to focus on the health care occupational areas,” said Lutz. “Having all of these stakeholders from (the credentialing field) is a great opportunity to discuss how we can reduce the barriers. The main thing is to learn from what’s been done. We’re highlighting some of the key best practices that have been put in place. I think that’s really the hope – if you find that one certification agency has done something to promote a military servicemember being able to get credentialed, then maybe another agency, state or academic institution can model their program after that.”