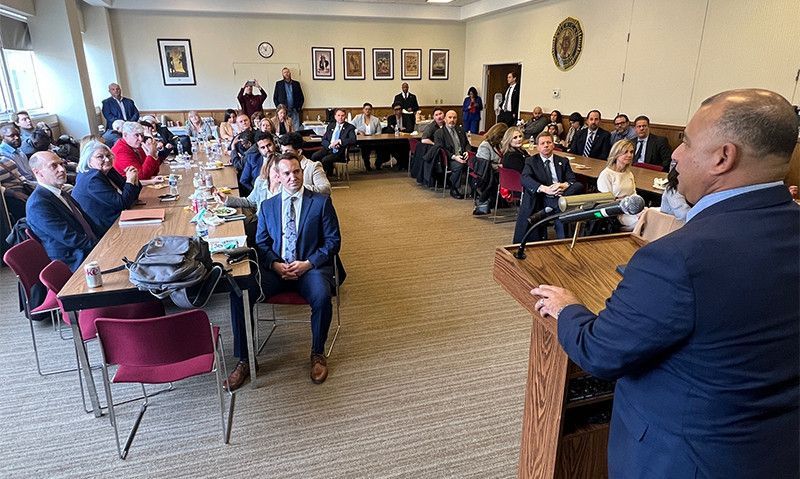 Wednesday’s luncheon at American Legion National Headquarters in Washington, D.C., in a sense, had been simmering for over a decade.

Stakeholders from all points on the map, of multiple different backgrounds, filled the seventh-floor conference room, broke bread and reviewed their efforts over the last eight months to connect military veterans, spouses and wartime allies with jobs that can help the United States close a massive labor gap and repair a national supply chain that was badly harmed by the COVID-19 pandemic.

They gathered as one coalition under the umbrella of Task Force Movement (TFM), launched last April at the White House, led by former U.S. Rep. Patrick Murphy, first veteran from the war in Iraq to be elected to Congress. TFM began the day with a “partner convening” session Wednesday morning at the Eisenhower Office Building on the White House campus and moved for the afternoon to the Washington home of the nation’s largest veterans organization. A key development since April has been TFM’s role as a clearinghouse and promoter of government, military and industry programs and career-training opportunities for veterans, military-affiliated spouses and even Afghan refugees who helped U.S. forces in the global war on terrorism.

On hand were U.S. Cabinet assistant secretaries, education officials, union representatives, cybersecurity experts, truck drivers, Afghan refugees starting new lives in America, agency leaders, American Legion staff and others. Together – and not for the first time – they reviewed accomplishments of the last eight months and where it all goes from here.

Many of the stakeholders Wednesday have been involved with The American Legion’s efforts for over a decade to ease the transfer of military training hours into credits for veterans pursuing careers in specialized fields that require civilian schools, licenses, credentials, time and cost.

The disconnect – which had been gradually shrinking after years of Legion-organized licensing and credentialing conferences and other gatherings on the subject – has risen as a federal priority as the trucking industry faces an estimated 80,000-driver shortage and more than 40,000 jobs for qualified cybersecurity professionals are unfilled. TFM has specifically locked in on those two industry needs this year in part because many veterans are trained to help fulfill them, through accelerated programs already in place, or evolving, by various partners of the task force.

“What we’ve seen – or I’ve seen – through Task Force Movement is results,” said Daniel Kunze, TFM board member who specializes in technology and cybersecurity. “Results matter. Results speak for themselves. And the people that drive results are those who are going to change the world. That’s what we are here to do.”

Public-private partnerships, nearly all participants said, are the essential ingredient – bringing together programs already in place through the military, VA, government agencies and, vitally, industry. Veterans are starting to find the programs, and employers are making progress in hiring them, officials said, but the word still needs to reach more who are eligible to take part.

National shipping giant Werner Enterprises was one of the TFM industry partners represented in the Wednesday sessions. A company representative said that more than 2,000 apprenticeships had been processed just this year – for drivers, diesel mechanics and transportation managers – where veterans whose on-duty military time counts in the equation to complete the requirements.

The morning session included updates on growing participation – and a call for more awareness – in programs, for instance, that ease the skills-test requirements for veterans in trucking if they have already proven their skills in uniform.

TFM Executive Director Cassie Byard said the initiative “has been running at warp speed” by building partnerships and making connections and has recently helped Afghan refugees who assisted American forces find career paths in the United States. She said a first-year report on TFM is set to be published in April. A full report of the 2022 American Legion Licensing and Credentialing Summit from last August was published this fall to summarize work to date and identify opportunities for action.

Assistant Secretary of Defense for Readiness Shawn Skelly spoke of DoD SkillBridge’s growth – which gives active-duty personnel specialized career training before they discharge – and reiterated a message she delivered at the 103rd American Legion National Convention on how that benefits the Armed Forces.

James D. Rodriguez, assistant secretary of the Department of Labor’s Veterans Employment and Training Service, told the group at National Headquarters that “it’s in our national interest to have partners that are willing to help us continue to build back, out of an economic slump. We know that it’s in our national interest to ensure that our veterans have a stake in the economic recovery. All this starts with good, solid partnerships and leaders.”

American Legion Veterans Employment & Education Division Director Joseph Sharpe said he is pleased that so many stakeholders are working together to resolve an issue and build on a foundation the organization began addressing years ago.

“It was really The American Legion that had been bringing these folks together over the past 10 years through our licensing and certification conferences,” he said. “A lot of the initiatives and accomplishments that you’re seeing now is from The American Legion bringing these people together, bringing them these issues, and following up on it to make sure that some of the recommendations have been implemented and have actually helped our veterans at the grassroots level.”

Since April, the issue has grown more urgent “because of the supply chain,” Sharpe said. “And now people are recognizing that putting veterans to work is in the national interest. You can’t have a strong national defense if you don’t have a strong economy. People are starting to pay attention to this. And remember, that was the whole purpose of the GI Bill.”