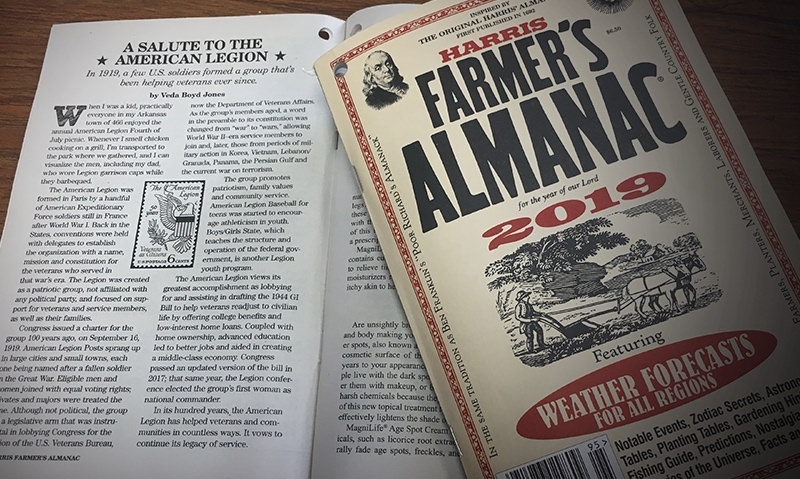 The 2019 issue of the Harris Farmer’s Almanac salutes The American Legion with a one-page article recognizing the organization’s 100th anniversary. Now on sale nationally, the annual collection of weather forecasts, notable events, predictions, gardening hints and more also profiles in the same issue Moina Michael, the so-called “Poppy Lady” who fueled U.S. attention on the flower and its meaning as a symbol for the fallen of World War I.

In the article “A Salute to The American Legion,” writer Veda Boyd Jones notes several of the organization’s accomplishments over the last century, including American Legion Baseball, Boys State, establishment of the Veterans Bureau, predecessor to the VA, and the 1944 GI Bill, as well as the Legion’s support for the most recent update of it, the Harry W. Colmery Veterans Educational Assistance Act of 2017.

“In its hundred years, The American Legion has helped veterans and communities in countless ways,” Jones writes. “It vows to continue its legacy of service.”

In “The Poppy Lady,” writer Diana West tells the story of Michael, who in 1918 took leave from her college teaching job to volunteer for the YMCA during the war effort. Shortly before the Nov. 11, 1918, armistice that ended the war, she read “In Flanders Fields” by Canadian Lt. Col. John McCrae and was so inspired she vowed to always wear a red poppy in remembrance of the fallen.

In time, she took that idea to the media and other organizations, including The American Legion’s Department of Georgia, a move that ultimately led to a national resolution passed on Sept. 29, 1920, endorsing the poppy as the official flower for memorial purposes.

The article notes the American Legion Auxiliary’s acceptance of the poppy and fundraising efforts employing the services of disabled veterans that in 1939 alone produced funds that provided care for 126,251 veterans and 442,489 of their children.

American Legion National Commander Denise H. Rohan, upon seeing the 2019 Harris Farmer’s Almanac, sent a letter of thanks to the editor of the publication, noting that much has changed for the Legion over the last century “but what remains the same are our values and love of this great country. It is fitting that you chose the 2019 edition of the Farmer’s Almanac to tell our story – one that began exactly 100 years earlier in Paris, France.”