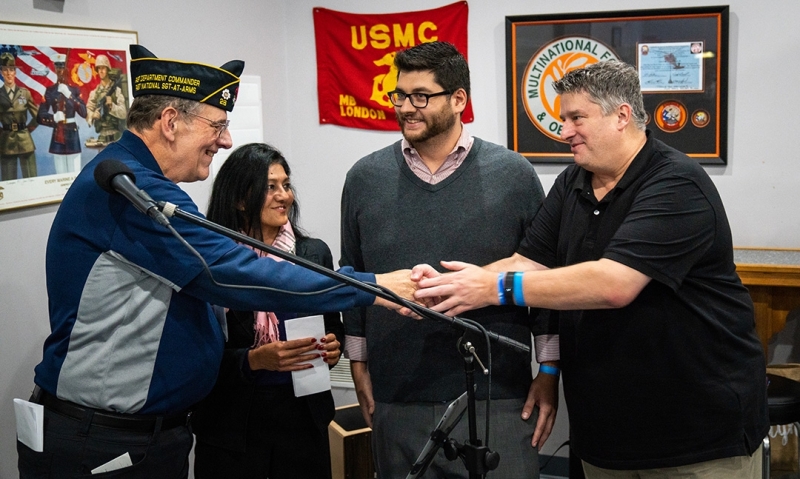 As a teenager, Adam Card was the victim of an assault that left him with a diagnosis of post-traumatic stress disorder. Card said it made his life “a whirlwind” and left his mother, Aliya, dealing with secondary PTSD.

Aliya turned to yoga to cope and eventually opened the Peace of Mind & Body Wellness Studio in Washington, D.C. That led to Aliya then founding The Common Strand Foundation. Working alongside her husband, Brian, and Adam – the foundation’s chief “inspiration” officer – the trio works to assist veterans battling PTSD through yoga, better nutrition and support.

But now The Common Strand is expanding its mission, and has gotten a big boost from The American Legion via a $28,500 Child Welfare Foundation grant. The Cards were presented with notification of their grant by CWF board member George Lussier during an event Oct. 29 at American Legion Post 28 in Triangle, Va.

The Common Strand received its grant for its project “Children of PTSD Victims.” The money will fund a website with kid-friendly downloadable reference material to help children cope with their situation and create a more balanced and nurturing home environment.

Adam, who along with his father are members of Post 28's Sons of The American Legion squadron, said getting the Child Welfare Foundation grant “is huge. I’ve been doing all this legwork and figuring out server costs, doing videos, going around to these places. (The grant) basically means we can start. All of this work we’ve been putting into it and trying to get done. The sweat equity is starting to pay off now. It’s a huge emotional boost … knowing that there’s other people recognizing the work we’re doing and (who) want to help us grow.

Adam said the hope is to provide a web platform that can bring children of PTSD sufferers together. “We’re seeing a lot of these other charities doing things with PTSD,” he said. “Realizing that there’s no one solution for one person because it’s such a dynamic problem … that’s where we decided we wanted to start this website to where we could use it as a springboard to gather information for people – especially the kids who are seeing their parents go through these things.

“This would be an easy way to connect, being on the Internet and going through social media aspects. Little videos and stuff that explain to (children): No. 1, it’s normal for your dad to do this when he has (PTSD). Just getting the information out to them, letting them know they’re not alone. Hopefully that will help to foster another type of relationship.”

Adam said The Common Strand also hopes to fill a need often not met – thanks in part to The American Legion Child Welfare Foundation. “The kids (of PTSD sufferers), they’ve got no way of being able to help themselves,” he said. “That’s their support system. So an organization like The American Legion, that is able to go out and help the kids, it’s great foresight.”