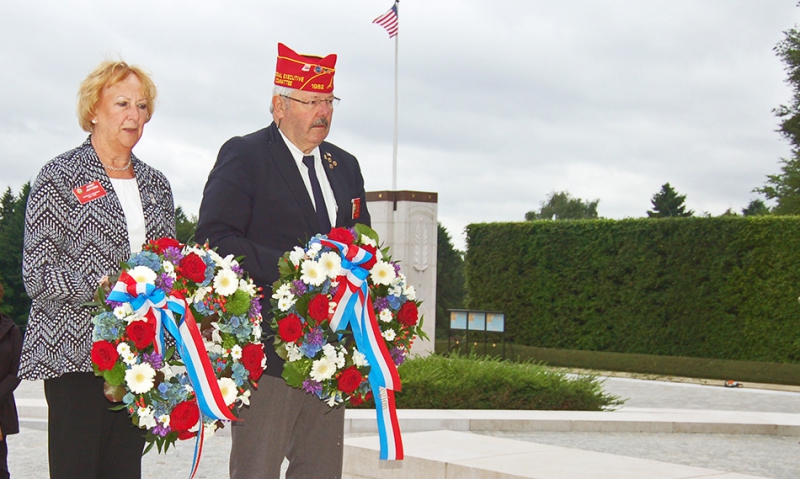 American Legion Auxiliary National President Janet Jefford entered the chapel at the Luxembourg American Military Cemetery Wednesday, placed a wreath of red, white and blue flowers on an easel, and remembered those who fought in World War II.

"When I laid that wreath in there, I started crying," she said. "My dad, my uncles... I think of my mom and what she went through, what all the families at home went through."

Jefford and American Legion National Executive Committeeman John Miller from the Department of France spent the day honoring the memories of those who fought and fell, and the ordeals endured by thousands of families caught in the crossfire of World War II's last epic battle in the European Theater, fought in fog, snow, ice and subzero temperatures in the winter of 1944-45, by battle-weary combatants on both sides of the line, whose food, fuel, medicine and ammunition gradually dwindled. At the Luxembourg cemetery, the group learned from superintendent Scott Desjardins how the war in Europe came to a deadly crescendo in December 1944 when Hitler's Third Reich mounted its final major counterpunch to the Allied march toward Berlin. It became known as the Battle of the Bulge and produced more than 87,000 U.S. casualties and more than 120,000 on the German side.

The need to bury the dead – American and German alike – was urgent that winter, long before the Americans were able to finally break through the enemy line. By Dec. 29, 1944, the 52-acre parcel of land near the town of Hamm began filling with graves. The U.S. government began negotiating with the Hamm mayor and local landowners about the needed property. Newly liberated from Nazi occupation, three out of the four landowners who had title to what would become the Luxembourg American Military Cemetery donated their acres in perpetuity, at no charge. The town of Hamm purchased the acres of the other landowner and gave them to the United States, Dejardins explained, as an act of unmitigated gratitude.

At its peak, more than 22,000 were buried there. Following the war, families had the choice to repatriate their loved ones to the United States, and after the Germans were moved to a different cemetery, the site became the final resting place of 5,076, including 22 sets of brothers and of legendary U.S. Army Gen. George Patton, whose grave marker stands apart from the rest – not by his or his family's wishes, but because by the late 1940s visitors were already beating such a path to see his marker among the other soldiers that maintenance of the grass was nearly impossible.

The American Legion Family group moved from Luxembourg Wednesday afternoon to the heart of the Battle of the Bulge, the city of Bastogne, Belgium, where they were met by Mayor Lutgen Benoit, who is also a member of the nation's parliament and a devout supporter of American veterans and their sacrifices. At the Bastogne War Museum and monument, Jefford, Miller and Benoit placed two more wreaths and thanked the city for its efforts to keep the memory of the battle alive for future generations. That memory is expressed with reverence at the state-of-the-art museum, which tells the entire story of the war in a four-dimensional, multi-media facility newly refurbished in honor of the battle's 70th anniversary last winter.

"Bastogne is known to be the most American town in Belgium," said Marie-Lise Baneton, U.S. Army Public Affairs Officer-Europe, who has played an important role in the revitalization of Flanders Field American Legion Post BE02 from one member to more than 80 in the last three years. "You come in December, and you will see American flags everywhere. (The Battle of the Bulge history) is so important to the people of Belgium. They really try to educate the younger generation. They have special programs in the schools. They really feel it."

On Wednesday, The American Legion Family shared in that feeling, honoring the memories of all who put their lives on the line between Belgium and Luxembourg and Germany, to liberate Europe and bring an end to one of history's greatest nightmares. It is a feeling the people of Luxembourg and Bastogne want all future generations to understand and appreciate.

We are the nation's largest wartime veterans service organization, committed to serving veterans, community and country.