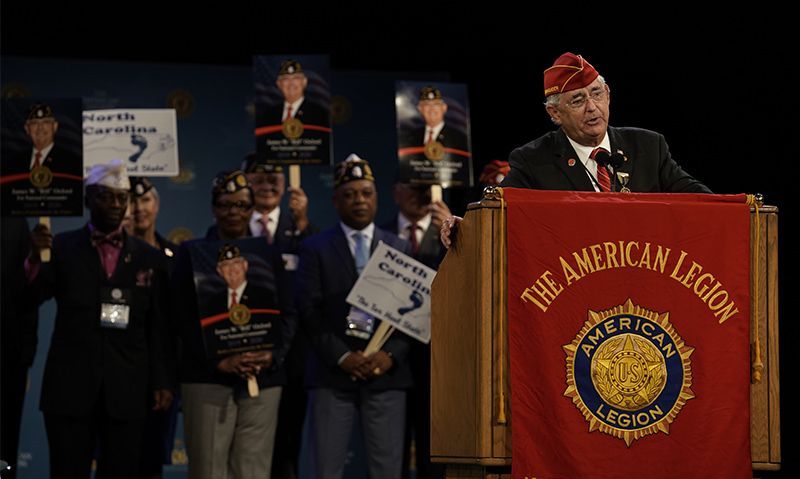 As he stood on the stage in the Indiana Convention Center on Aug. 29 following being elected American Legion national commander for 2019-2020, North Carolina Legionnaire James W. “Bill” Oxford made it clear continuing the organization’s legacy into its next 100 years is not the job one person can perform.

“As I looked around this hall today, I am humbled to beyond belief … to accept this nomination as your national commander,” said Oxford, who was elected during The American Legion 101st National Convention. “We have a terrific organization. Whatever this job is, I will do it to the best of my ability, but I can’t do it alone. I need everybody here on my team, helping us reach our goals and objectives. We are all stakeholders in this organization. We are the future of this organization.”

A Paid-Up-For-Life member and past commander of American Legion Post 29 in Lenoir, N.C., Oxford said as The American Legion’s centennial celebration comes to an end on Veterans Day, it’s good time to look back on 100 years of successes and accomplishments.

He pointed out the Legion’s role in creating the original GI Bill and being part of efforts to update it, the important role the organization played in the creation of what is now the Department of Veterans Affairs, the drafting of the U.S. Flag Code and, most recently, gaining passage of the LEGION Act.

American Legion charitable funds, Oxford said, have provided millions in scholarship money, disaster relief and financial assistance. The Child Welfare Foundation has provided more than $16 million in grants to organizations that contribute to the physical, spiritual, mental, and emotional needs of children. And the Legion’s Operation Comfort Warriors provides items to recovering wounded warriors and veterans not covered by the federal government.

“When we think about those charities, there’s one special thing about the Legion charities: 100 percent of the funds go toward the programs,” Oxford said. “All operational and administrative costs are covered by The American Legion. All of that money goes to those charities.

“All of these things we’ve talked about shows who we are, but it also shows what we do.”

What the Legion also does, Oxford said, is promote Americanism through flag education and being involved in local schools, advocate for veterans’ benefits and health care, support a strong national defense, and support America’s youth.

“Does that sound familiar?” Oxford asked. “I think it does, because we are talking about the Four Pillars of The American Legion. That’s the thing that’s made The American Legion the largest, most powerful veterans organization in this country.”

Oxford then turned his focus toward the future. “The things we did yesterday, we do today and we will do tomorrow are building the foundation for the future of this organization,” he said. “And if we think about The American Legion’s policies, programs (and) efforts, we’ve got to consider what makes those programs work. Those programs work by the people who participate in them.”

Oxford said membership is the key to the Legion’s mission succeeding. He set goals of a 90-percent retention rate and adding 100,000 new members in 2019-2020, with a long-term goal of reaching 3.3 million members – the all-time high number set in 1946.

With the LEGION Act’s passage, “we need to recognize and pursue the 4.2 million veterans now eligible to become Legionnaires,” Oxford said. “

Oxford said that while it’s not a goal that can be measured, something else needed is to increase membership is to raise the visibility of The American Legion.

“If there’s fish fry, baseball game, a flag retirement – regardless of what the event is, we need to do two additional things,” he said. “There needs to be a news release before (the event) so people will know about it. Invite them to come and participate and help. And after the event, and just as important as washing the last pot, is doing the same thing.

“We all know what the Legion is and the value we have. But does everybody else? A photo, an article, a video, a blog. And use social media.”

Oxford said his initial commander’s project will be promoting The American Legion Centennial Coin, which remains on sale until the end of December. Proceeds from coin sales will help fund American Legion programs that support veterans, servicemembers, their families and the communities in which they live.

In January, Oxford said his emphasis will shift to fundraising for The American Legion Veterans and Childrens Foundation. All contributions to the foundation go directly to the Legion’s Temporary Financial Assistance program and to Veterans Affairs & Rehabilitation efforts – primarily training for American Legion service officers who work tirelessly to help veterans and families understand their health-care benefits, education and employment opportunities.

A veteran of the U.S. Marine Corps, Oxford was an aviation electronic technician for the A-6 Intruder and served in Vietnam during his initial enlistment. After being discharged as a sergeant in 1970, he joined the North Carolina National Guard, attended officers candidate school and transferred to the U.S. Army Reserve, where he retired as a colonel after more than 34 years of military service.

Oxford has served as Department of North Carolina commander, as well either chairing or being a part of several national American Legion commissions. He also is a former mayor and city council member of Cajah’s Mountain, N.C., and has served as the public address announcer for the Post 29 American Legion Baseball team.